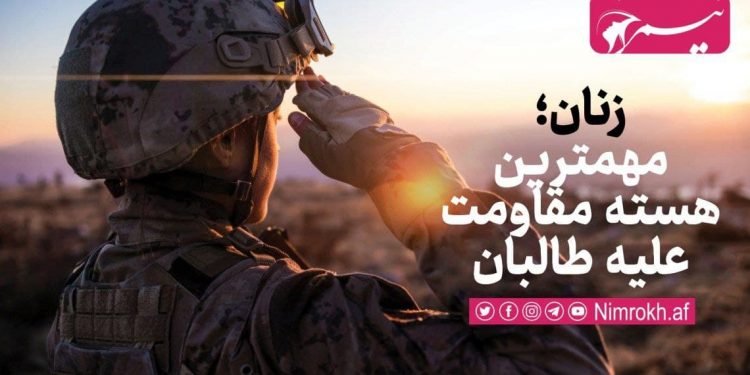 Afghan Women; The main core of resistance against the Taliban

Mansoura Mousavi is a researcher and sociologist who has written on taboos and women’s rights to their bodies. The two books “Taboo of Femininity” and “Femininity and Body” are among her important works that study the abuse of the patriarchal society of women bodies and the physiological needs of women in social and cultural affairs, as well as limitations that stop women on the path of progress only because of anatomy and gender. She has also translated the book “Fifty Million Rising” into Persian. Nimrokh interviewed her about the taboo of female identity in Taliban thought and the background of Taliban thought in the Middle East. She has also taught at some Iranian universities.

Nimrokh: Can it be inferred that the Taliban criminalize and restrict women’s identities for fear of exposing their weaknesses towards women?

Mansoura Mousavi: The identity of the Taliban as a totalitarian religious fundamentalist group is tied to two important issues: first, criminalizing the female body and ignoring and denying women’s social and civic identities; second, disagreement with any new concept that causes human progress and development.
In fact, the Taliban’s definition of itself is based on such assumptions. If we ignore such ideas of this group, it will not be much different from many terrorist and non_terrorist totalitarian groups.
The belief that women are accomplices of the devil and lead men to sin and should be veiled and kept out of the public eye and limited to the sexual and gender role defined by this group (when in power) stems from the very first idea. And if we look at it from a political perspective, totalitarianism is always the equivalent of removing one or more groups from society to make it easier to control the remaining groups. According to Foucault, classifying individuals as mentally ill, guilty, belonging to an ethnic or religious group, or being a woman can eliminate and ignore a large part of the population, and the remaining part because of its affiliations with one or more of them remains weak and vulnerable from these deleted categories.

In the second view, there is no need to explain that the opposition of the Taliban to modernity and everything that is in the way of development and progress of society and raising the awareness of human beings is limited. They want the people to be blind and deaf obedient. That is why this opposition to modernity does not lead to opposition to the use of the most modern weapons of war and the use of modern tactics of war. They use modern tools of warfare to impose the ideas and thoughts that belong to centuries ago, and this makes their political and social tactics and strategies ugly, disgusting, and terrifying caricatures.

Nimrokh: In a gender-oriented Taliban political system that believes in the suppression of women’s identity, what do you think women who have experienced the role of women and relative freedoms in Afghan society over the past two decades, and many have achieved higher education and senior management positions, should do?

Mansoura Mousavi: The Taliban’s presence, expansion, and rule in Afghanistan may disrupt the pro-democracy process, but it cannot reverse or even stop it. The reason I use the term “prodemocracy” is that the process of realizing women’s rights and women achieving the social and political positions they have strived for, I think, if not the foundation of democracy in all societies, is certainly one of its most important dimensions.

I believe that the tree of democracy will not bear fruit except with the help of women’s efforts and the realization of women’s rights, women’s access to political and social positions, and the presence of women in the public arena and society.

Hence, the presence of Afghan women in the public arena – which I believe is not separate from the status of women in other societies in the Middle East and even the Orient – although it is like a thin sapling that bends in the wind of events, but does not break. Because this “desire” and this “action” arising from this effort has no roots in the last twenty years, Afghan women, like women in all societies, are going through a tumultuous history full of the experience of living in patriarchal societies.

Obviously, the women’s movement can overcome the leading crises by relying on such experiences, and I think it has taken an important step if the Afghan women’s movement goes back to its roots and draws on the experiences of Afghan women in the past and the experiences of Middle Eastern and Muslim societies; Because the experiences of societies like Afghanistan have shown that education, employment, political and military presence can neither be an obstacle to totalitarian anti-feminist goals. What drives this movement to sustain itself is the growing awareness of men and women that trying to elevate the status of women and resisting the Taliban’s totalitarianism and its militancy with half the population, I mean women, is a “necessary”, “vital” issue and key to democracy, peace, and progress.

Lack of secondary understanding of the demands of women and the feminist movement is the most important way to prevent backwardness and return all the achievements that Afghan society, especially women, has achieved so far.

Nimrokh: As mentioned in the previous question, in these two decades a generation of educated women has emerged in the cities and villages of Afghanistan who are different from the women of the first era of the Taliban and do not accept the restrictions of the Taliban. How do you see the future of Afghan women according to the current situation in Afghanistan?

Mansoura Mousavi: Obviously, Afghan women have a rough path ahead.
One of the experiences that Afghan women should rely on is that they should not forget that in most movements and political struggles, women have joined men and fought against tyranny, inflation, unemployment, environmental pollution, and other civil and political demands. These women have even fought on the battlefields against the enemies of their country, but when it comes to the demands of women, they have met the demands of women as secondary and less important demands.

In most cases, after the victory or the end of these struggles, especially the wars, the efforts and struggles of women have been completely ignored and denied, and in an optimistic state, it has been considered as a national duty and the women’s movement has been forced to make their requests or demands, alone and Relying on the power of themselves or- perhaps a small number of men – and to negotiate each of these demands with those who have fought alongside them for “national” aspirations and “political” goals.

Briefly, the women’s movement is alone in pursuing its demands in these societies, and Afghan women in the fight against the Taliban must remember to put women’s demands at the forefront and not stop expressing them.