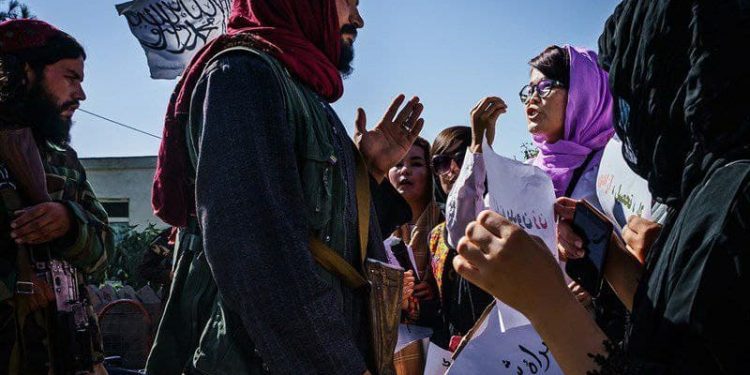 Three years ago thinking of retaking the power by Taliban was like a terrible nightmare. Three years ago when Donald Trump’s administration chose Zalmay Khalilzad as special representative for direct talk between the U.S government and terroristic group of Taliban, Afghanistan political communities particularly active women in policy, society and culture were concerned about the losing of last twenty years achievements. Also they were hopeful that Donald Trump forces Taliban to stop war and violence in Afghanistan.

Two years ago when political agreement signed between the U.S and Taliban, Afghanistan people especially women were concerned about the loss of achievements more than anytime.

While signing that agreement which was in fact selling Afghanistan to the terroristic group of Taliban Ashraf Ghani announced the list of government representatives to peace talks with Taliban, Afghan women protested to their symbolic and minimal participation in peace talks team.

When women’s protests failed, their hope to save past twenty years achievements replaced with anxiety. During ridiculous peace talks between Taliban and so called Republican representatives, Afghan women worry about highly masculine, intelligence and doubtful process and warn of trading off values and achievements.

Six months ago, when more than 25 political movements in Arg and Sepidar sat together without the presence of a single woman and gathered their demands for a political agreement with the Taliban, and since then, in their media statements, they have never talked about the values ​​and achievements of last twenty years  the alarm bells have been rung for Afghan women to be removed and forgotten. But the women’s litigation did not stop. The lawsuit, which was sporadic, incoherent, and tasteful, prompted a majority of human rights and women’s rights activists to warn of the consequences of the peace talks with the Taliban on the lives and destinies of Afghan women. In Europe, the U.S, Canada and Australia human rights organizations and some of parliament representatives or politicians realized the serious danger threatened Afghans women but it was late.

One hundred days ago, when the corrupt, illegitimate and disreputable government of Ashraf Ghani fell to the Taliban after the escape of this hated politician, the people of Afghanistan, especially the women of this country, found themselves in the grip of a devastating horror in the blink of an eye.

In these one hundred dark days that have passed since the re-establishment of the forces of crime and violence in Afghanistan, the world is watching how the unforeseen dimensions of terror and destruction will unfold in Afghanistan. Organizations, political parties and so called leaders who were corrupted, have all melted down and fallen to the ground.

Nevertheless, it was the Afghan women who, during all these hundred days, proved that women are the only remaining civil resistance forces on the streets of Kabul and several other Afghan cities. These were the women who stood face to face with the Taliban many times during these 100 days and shouted for justice.

But other side of the past hundred days were the terrorists of Taliban who have been trying to gain recognition by the countries of the world and the region. The Taliban are trying to be recognized by the world, or at least some countries. It’s while they have violated different kinds of human rights in their first hundred days. Hundreds of civilians have been shot dead. Inhumane laws have been imposed on the fate of the Afghan people, especially the women of this country. Women have been deprived of the right to work, the right to education, social participation, political participation and, in fact, all their civil-political rights.

According to the current situation, what is a serious responsibility to the collective destiny of Afghan women is to try to create a large global lobby and campaign to protect all women rights against the extremist thinking and brutal acts of the terroristic group of Taliban.

It is time for Afghan women to believe in their collective power and to stand together against the main demands and plans of the Taliban around the world. The Taliban, despite their 100-day struggle, have not yet been able to persuade a country to recognize the terrorist group as the ruler of Afghanistan.

Afghan women must realize that they have the undeniable opportunity, credibility and legitimacy to act in accordance with the standards enshrined in the Universal Declaration of Human Rights and the international conventions to which Afghanistan and the majority of UN member states have acceded. They have a binding responsibility to stand up to the Taliban’s main demands. Call on the United Nations and the UN Human Rights Council, and on the parliaments of countries that have acceded to the Convention on the Rights of the women, ask them not to recognize the Taliban.

Afghan women today have the largest workforce among the country’s diaspora. Thousands of educated Afghan women have been displaced around the world as a result of the fall of Afghanistan to the Taliban. Likewise, the thousands of Afghan women who left Afghanistan years ago and have access to power in their second countries need to understand their responsibility in the face of these difficult circumstances. All in unison around the world call on governments not to recognize the Taliban.

The fact of the matter is that in the current situation, no political faction other than the women of Afghanistan has the power and legitimacy to stand up to this demand of the Taliban. So it is time for women to unite as victims of the Taliban’s violence, war and savagery, and to unite around a legitimate and rational demand, rather than the fragmented team activities that focus more on team-based relationships and profit-seeking calculations. And call on the world not to recognize the terroristic group of Taliban because of their respect for human rights and their responsibility for the fate of the people, especially the women of Afghanistan.