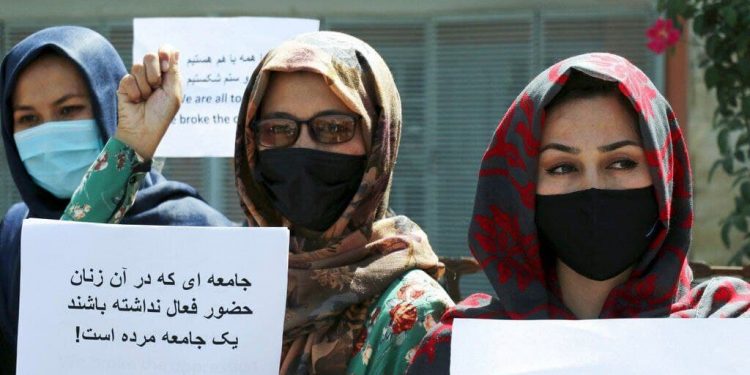 Who protested in the streets of Kabul?

Why women came to the streets?

She has come to one of the Pole Sorkh’s cafes for the first time since the Taliban took over. She is a young woman who until three months ago called the Pole Sorkh district a hangout for Kabul educators and visits the cafes and libraries here at least three times a week. Because of her own and her loved ones’ safety, she did not want to be named in the report, but insisted that Nimrokh’s followers know her as a “daughter of the street.” Perhaps this name also applies to her works.

“After the fall of the republic and the rise of the Taliban in Afghanistan, women remained the only civil society activists on the streets,” she said. “I am one of the women who are protesting in the streets these days.”

“As long as the Taliban was on the UN blacklist as a terrorist group, it had issued many orders to restrict us by setting fire to girls’ schools and assassinating active women, but the Taliban’s first political order after taking power was the dissolution of the Ministry of Women’s Affairs as well as banning of women’s right to education and work. We must stand up to these regulations of the Taliban today, otherwise, we will have to live for decades under the rule of this extremist regime.” the daughter of the street said.

Arefa Fatemi is another protesting woman who has played a significant role in shaping the Spontaneous Movement of Afghan Women Fighters. While protesting in the streets, she believes that women should also be good lobbyists at the international level to convince international organizations and countries involved in Afghanistan’s war and peace that they “do not recognize the Taliban and increase international pressure on the group till they respect human rights, women’s rights, and freedoms, and guarantee the citizenship rights of ethnic minorities.”

Who came on the streets?

Waheeda Amiri is a member of the Spontaneous Movement of Afghan Women Fighters. She was a librarian before the arrival of the Taliban. I met her in a library. Ms. Amiri says, “Two weeks had passed since the fall of the regime, and deadly terror and silence reigned in the city. I could not tolerate it and after much arguing, I persuaded my family to contact my friends and form a group of women fighters to protest and sue.”

Waheeda says people’s anger and hatred of the Taliban is understandable, but women are more angry, hurt, and protest than others. This led to the first organized street protest in Kabul on 3 September 2021: “The protest was attended by dozens of women from different social classes such as cultural and artistic communities, government and private sector employees, students and even ordinary women.

“So far, four groups have protested in Kabul to defend women’s rights, however, they proved that all women are on the front line against the Taliban, but there was a vacancy.” The same class that Arefa Fatemi mentioned: “Women politicians and leaders of institutions that have received millions for projects in the name of women over two decades.” the daughter of the street said.

“Many of those who had set up various institutions for the protection, advocacy and empowerment of women over the past two decades and were implementing support projects in the field of women’s rights and empowerment have left the country, not only they were absent during the march, but some of them tried to misuse our name, the Afghan Women’s Movement for world fame and perhaps another project.” Waheeda Amiri said.

“In order not to abuse our women’s movements and protests, we have maintained our independence and paid for the posters and banners of the rallies ourselves.” Arefa Fatemi said.

The daughter of the street is one of those who was beaten by the Taliban on the street in protest, but she is still determined, saying “we must stand up to get rid of the Taliban.”

“From the beginning, Taliban fighters tried to quell women’s civil protests by flogging, shooting and blocking marchers, but in the following days in Kabul, then in Herat, Balkh, Bamyan, Daikundi, Jawzjan, Badakhshan, Nimroz, Farah, Ghor, and Kunduz, one after another witnessed street protests by women. Women’s protests are becoming more widespread, and in various cities in the region, Europe, the United States and Australia, Afghan immigrants and human rights organizations have taken to the streets in support of women’s movements in Afghanistan.” Arefa Fatemi said.

She says one of her worst memories is that during one of their protests on Darulaman Road, “the Al-Badr group, one of the Taliban’s most dangerous suicide bombers, surrounded us in one area and announced that there had been a report of a suicide attack or explosion. They kept us there for three hours and barred us from making any contact. We were afraid they would launch an attack themselves.”

The Taliban do not react only in the demonstration field. Besides sending threatening messages and calls, they followed female protesters to their houses. Ms. Fatemi says that once on WhatsApp, I received a threatening message asking me to work with the Islamic Emirate instead of accepting the dangers of protesting. Once suspicious individuals came to my house and investigated my mother. The day we were supposed to visit Mette Knudsen the UNAMA Deputy Special Representative in Afghanistan, near the UNAMA office, and received an anonymous call threatening, “If you go to the UNAMA office, you will not return home alive.”

As Arefa was the coordinator of the meeting, she and her colleagues met with the UNAMA Deputy Director from the address of the Afghan Women’s Spontaneous Movement. “When we got back from the UNAMA office, I went straight to a restaurant and changed my clothes and changed direction and returned home,” she said.

“Many women protesters are facing the same kind of threats, and each of them may pay a price in this way. Many are not at their home right now, because street protests by women have affected the Taliban’s policies and credibility,” the daughter of the street said.

Arefa says that after August 15 (the day of the fall of Kabul) we women remained with the Taliban, whose orders against women were now being issued from the Kabul Presidental Palace. The Taliban have taken women’s rights hostage, seeking to bargain with the world over citizens’ human rights issues that “we respect women’s rights if you recognize us” but women have stood up and insisted that women’s rights should not be held hostage to the Taliban’s political face.

Arefa Fatemi says we / women also want “The international community will not recognize the Taliban until the Taliban group considers these demands of women and recognizes our rights.”

All the protesters inside and outside the country had specific demands, the most prominent of which was the “non_recognition of the Taliban as the legitimate government of Afghanistan.” by the international community.

The daughter of the street says that countries in the region and the world may value their national interests and foreign policy more than democratic values ​​and human rights in Afghanistan, but “women’s protests also seem to have contributed to the Taliban’s non-recognition, because these moves show the Taliban’s claims in the international community are false, and half the population/women, regardless of ethnicity, language or religion, do not accept Taliban rule.”