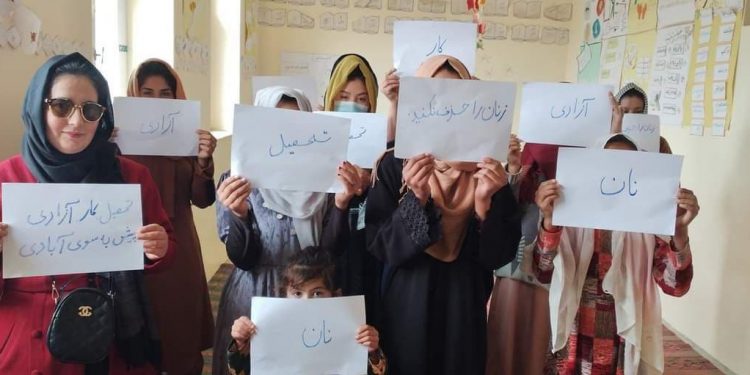 Women protested against the Taliban in Keshem, Badakhshan

Women in Keshem district of Badakhshan province protested against the Taliban and the group’s policy towards women.

Several women gathered today (Thursday, January 6, 2022) in a village in Keshem district to criticize the Taliban’s policy towards women.

Somaya Naimi, one of the women protesters, posted pictures of the protest scene and wrote, “Today we met some of the brave women in Keshem district and expressed our demands.

With the notable slogan “bread, work, freedom” used in the majority of women’s civil protests against the Taliban, the women called for respect for women’s right to work and education, and for the Taliban not to interfere in their individual and social freedoms.

Ms. Naimi also said, “The purpose of our lawsuit was that in the current situation, women are marginalized and have no right to study, the gates of schools and universities are closed to women and girls, and women can not work.

The women protesters called on the Taliban not to “eliminate women” but to respect women’s freedom and not to hinder girls’ education: “We want the Taliban to open the gates of schools and universities to female students and allow women to be free and work.”

While the Taliban has been increasing restrictions on women every day for less than five months, women’s protests are growing. In recent months, women’s civil protests in the city of Faizabad, the capital of Badakhshan province, have been severely suppressed and feminine radio stations have been shut down by Taliban fighters, and in some cases, radio stations are used to propagate extremism.