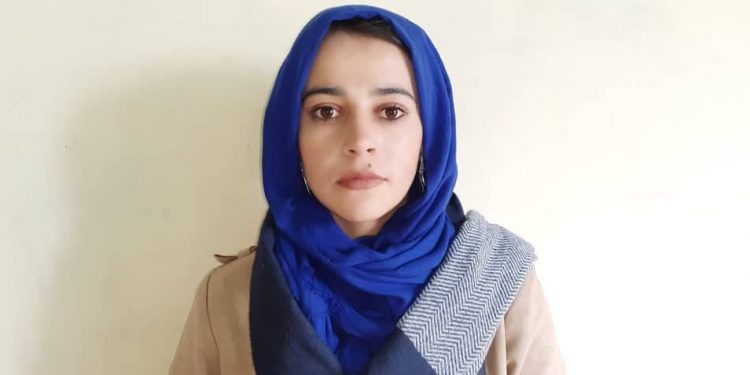 Marjan Amiri is one of the women protesters on the streets of Kabul and the first woman to respond to the Taliban’s violent treatment of women with a “slap”.

The 7th of September 2021was the beginning of women’s civil marches against the Taliban. Hundreds of people rallied in front of the Pakistan embassy in Kabul over Pakistan interference in the Taliban’s crackdown on Panjshir people and the Taliban’s restrictions on women. Marjan Amiri clashed with a Taliban fighter as protesters chanted slogans against Pakistan and the Taliban.

“Taliban fighters are always trying to disperse us with threats and violence during civil marches,” Marjan told Nimrokh.

That day in front of the Pakistan embassy, a Taliban fighter tried to seize Marjan’s cell phone by force so that she would not film the protest scene and silence the protesters: “He thought I was filming the demonstration. He reached me silently and attacked me, he wanted to take my cell phone, but I resisted and did not give it. When he attacked me again, I slapped him hard in the face. “He had a rough appearance, he turned around and slapped me as hard as I shook and almost fell to the ground.”

But violence with protesters does not end there. Marjan says she was flogged many times until the end of the demonstration. Because each of the Taliban fighters responsible for preventing civilian rallies attacked protesters to disrupt the demonstrations and flogged women to disperse. Not only did the women disperse, but they also chanted louder.

The atonement for protest and resistance is not only slapping, whipping and the butt of a gun, and it does not end with fear of airstrikes but Marjan is the sixth woman who confirms to Nimrokh that is threatened to death due to protest against the Taliban.

Marjan Amiri has been repeatedly threatened with death during and after protests.

“The Taliban are scaring me to death,” she said. They say if we see you again in the street protests, we will kill you. But I’m not worried about my life. With the loss of basic rights such as the right to education and work and individual freedoms, I am already dead.

Marjan emphasizes that “respecting the freedom and rights of women is my red line.”

It is typical in different societies when street protests are launched, government officials give protesters a chance to make their demands and negotiate for an agreement. But, the Taliban, which has been blacklisted by the United Nations and the Security Council as a terrorist group, came to power in political collusion after the runaway of former President Ashraf Ghani Ahmadzai and adopted a special style of governing.

The first political action and most of the Taliban’s proclamations and prohibitions were not in the field of public services and governance but focused on removing women from politics and society and imposing more restrictions on women. Accordingly, women’s protests have not only provided an opportunity for political dialogue between women and the Taliban, but the Taliban have always committed violence to suppress women’s protests and to stop the resistance.

Coincidently, the Taliban do not seem interested in listening to the demands of women and instead try to plunder the country’s resources and try to keep their regime ruling by establishing a monosexual, monoethnic government. Obviously, in the military field, it maintains ties with al-Qaeda and other extremist and terrorist groups to prevent the formation of popular resistance inside and stop the spread of possible attacks by the Khorasan branch of ISIS.

But Marjan Amiri and her comrades in Kabul, as well as other women protesters across the country and even outside Afghanistan, are staging mass protests to prevent the Taliban from being recognized and to encourage people to resist the group.

Since the Taliban came to power, women have been deprived of all their basic rights and civil-political rights, the gates of girls’ schools and universities have been closed, and women do not have the right to work, free access to health care, and the right to go out in their favorite dress. They do not have the right to ride in vehicles without a mahram. But these Taliban orders are carried out by force. But women in none of Afghanistan’s provinces have accepted these anti-feminist laws, and despite enduring the Taliban’s flogging and slapping, they have continued to resist the group.