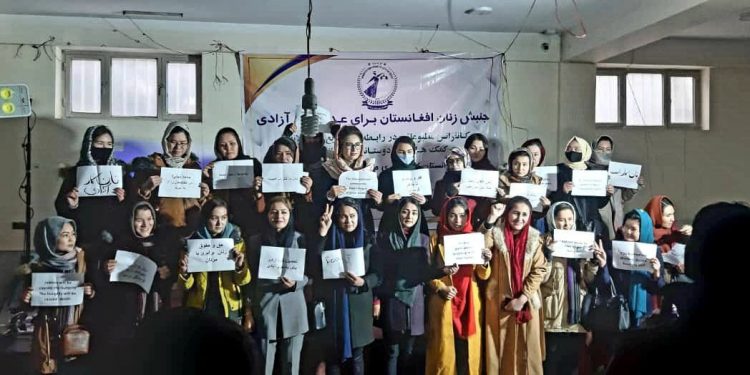 The Taliban distribute international aid unfairly and through ethnic affairs

The “Women for Justice and Freedom Movement” held a press conference in Kabul today (Saturday, January 8, 2022) urging the Taliban to provide immediate assistance to the real poor people and the international community to monitor the distribution of aid.

The movement issued a resolution stating the “robbery of cash, food, clothing and basic household items donated by international organizations by neighborhood councilors in cities and Taliban individuals in the provinces.

Statistics from the United Nations World Food Program (WFP) show that more than half of Afghanistan’s population is at risk of “starvation” and that 23 million people are struggling with poverty.

But the Women for Justice and Freedom Movement says that among all the provinces of Afghanistan, the central provinces and districts are among the most underprivileged and the poorest in Afghanistan, which has also been deprived of emergency aid by the international community.

According to statistics, from the arrival of the Taliban until the end of 2021, 68,000 families in Afghanistan have received cash and non-cash assistance. But the Women for Justice and Freedom Movement says: “Unfortunately, the allocation and distribution of this aid is unfair and based on ethnic, religious, regional, political affairs.

Among the provinces where the Taliban ignored the distribution of international aid or where there was corruption and prejudice were Daikundi, Bamyan, Samangan, Jawzjan, Ghor, and Markaz district, and the first part of Behsud in Wardak, Malistan, and Jaghori in Ghazni and the 13th, 18th and 6th districts of Kabul city.

The women’s protest movement, which was formed to resist the Taliban, has also provided examples of injustice in the distribution of ” international aid to save people from starvation”.

But Bamyan and Daikundi provinces received only 0.2 percent of total aid.

Criticizing the lack of oversight of aid agencies in Afghanistan, the women’s movement said: “These areas seem to be under sanctions by aid agencies regarding the Taliban’s treatment.

But injustice and bigotry in the distribution of aid are not limited to the provinces. The women’s movement has found that while western Kabul, especially the Barchi district, has a population of about 2.5 million and the majority of these people are struggling with poverty and hunger, and even a few weeks ago eight children of a family died of hunger. In the 29 rounds of aid distributed in Kabul, the share of these people has been very small and insignificant, which is also divided between the “neighborhood councilors” and their relatives.

For Daikundi province, little cash and food aid was allocated, but the emergency aid, which was to be distributed to the poor to save them from starvation, was distributed to Taliban members from Gizab, Kajran, and Pato districts.

The Women for Justice and Freedom Movement, meanwhile, has called on the United Nations, donor countries, and implementing agencies to provide cash, food, clothing, and necessities to poor, homeless, widows, and real hunger people without ethnic discrimination.

The women ‘s movement warns that to prevent a humanitarian catastrophe and stop violation of the rights of the poor, oppressed, and disadvantaged, a transparent mechanism must be set up under the auspices of international organizations and aid distributed throughout Afghanistan, regardless of ethnic, linguistic, religious or political affiliation.

The resolution also called for local staff of UN agencies and charities to be selected from all ethnicities, religions, provinces, and women, and for the Taliban to refrain from discrimination and prejudice to save the people from starvation. And not to target specific provinces and individuals, but to punish those who commit theft, corruption, ethnic bigotry, and gender discrimination in the distribution of aid.

It is also suggested that in order to create transparency and prevent corruption in the global aid distribution process, the media should be provided with oversight for the distribution of international and domestic aid, and a list of individuals and families in need should be prepared and shared with the media to prevent robbery by rich families, neighborhood councilors and the Taliban officials.