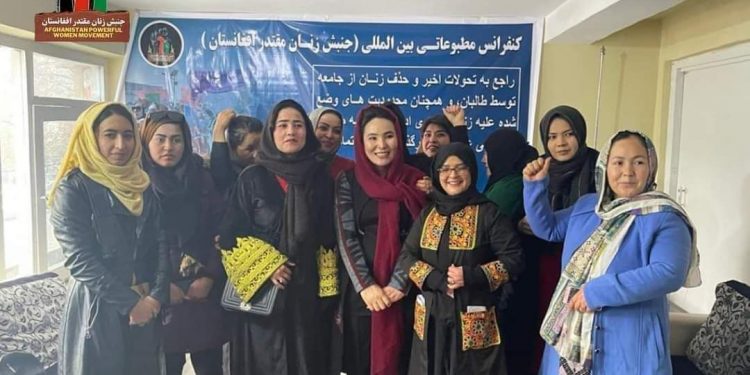 The World Suppress the Taliban immediately

The Afghanistan Powerful Women Movement says the world must take immediate action to crack down on the Taliban. Members of the women’s movement which is formed to resist the Taliban gathered in Kabul today (Saturday, January 8, 2022) to protest against the Taliban’s restrictions on women. A statement issued by the movement said, “The Taliban, with their extremist and anti-feminist thinking, are trying to impose restrictions on women’s lives and to narrow the circle of life and breathing for women every day.”

Referring to the Taliban’s policies towards women, the women’s protest movement said, “Women are half of society and have equal rights with men, but the Taliban ignore women’s rights and impose such restrictions on Afghan women that even in primitive times before Islam didn’t exist.

The women criticized the international community and international women’s rights organizations for their inaction on the plight of Afghan women, saying they had “shameful and embarrassing silence” over the Taliban.

Emphasizing the fundamental rights of women, the members of this movement have said that “work, education, freedom and equality” are our rights and we will not ignore our fundamental rights, and we will fight against injustice, tyranny, and oppression of the Taliban. The Afghanistan Powerful Women  Movement has emphasized that “Afghan women do not accept the black Taliban regime in any way, but consider it only a misogynist, misanthropist, and primitive regime.”

The movement’s declaration states that the Taliban must make schools and universities’ situation clear as well as women working and studying conditions as soon as possible.

It also stressed that “international groups, institutions, and organizations for the protection of women and human rights defenders should listen to the voice of Afghan women and end their shameful silence.”

According to this women’s movement, the Taliban is a potential threat to justice inside the country as well as regional and global security that should not be recognized. Therefore, “the world must take immediate action to reform or suppress the Taliban.” The Taliban, which was ousted by US repression in 2001, regained control of Afghanistan less than five months ago with the withdrawal of US troops and the escape of former President Ashraf Ghani Ahmadzai. No country has yet recognized the Taliban, and women have continued to protest and resist the group.