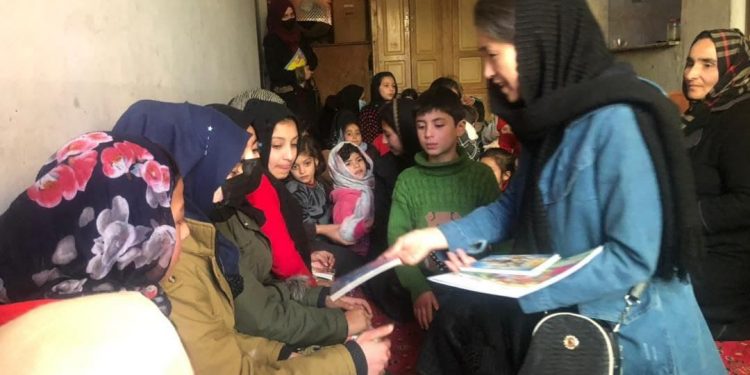 The Spontaneous Movement of Afghan Women’s Fighters distributed books to girls deprived of their right to education by the Taliban.

This women’s protest movement says it has distributed storybooks to dozens of children in Kabul today (Monday, January 10, 2022) to promote reading.

Arefa Fatemi, one of the founders of the Spontaneous Movement of Afghan women’s Fighters, told Nimrokh that children’s storybooks have been distributed to sixty children under the auspices of the Diligent Women’s Association, following the movement’s previous book-reading programs.

She added that the aim is to promote reading among children and to support the creation of home-based courses to enhance the capacity of girls who are currently deprived of formal education in schools.

Arefa Fatemi told Nimrokh that the diligent women’s school has so far recruited about 30 seventh- to twelfth-grade female students who have settled down since the arrival of the Taliban in a professional tailoring course.

The organization now plans to offer free literacy and vocational courses for children and needy women in Kabul’s 17th district but needs support to start classes.

While the Taliban have banned women from education after coming to power, protest movements such as the Spontaneous Movement of Afghan Women’s Fighters stand for Women’s Rights and Freedoms, and educational institutions such as the Diligent Women’s Association are holding home_based vocational courses.