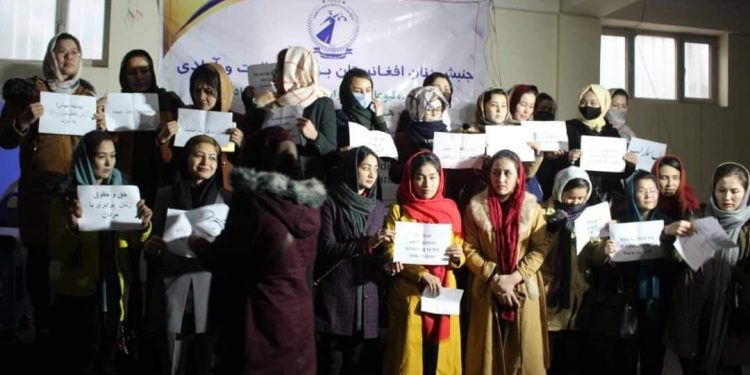 On the first day of the Oslo summit in Norway and the start of talks between a 16-member Afghan civil society delegation and the Taliban, there were numerous protests from Kabul, Bamyan, and Balkh to Oslo in Norway and Toronto in Canada.

Following these protests yesterday (Sunday, Jan 23, 2022), the Afghan Women’s Movement for Justice and Freedom in Kabul and many women in Balkh protested in connection with the meeting and the Taliban’s violent actions against women protesters in the country.

Talks between the Taliban delegation and Afghan civil society representatives began behind closed doors in Oslo yesterday evening. A meeting that has raised a lot of speculation about the secret outcome.

“After the fall of the Taliban, women who have been housed and deprived of their right to education, work, social and political activities, have staged street protests, but the protests have been violently suppressed by the Taliban.” the Women’s Movement for Justice and Freedom said in a letter regarding the Oslo summit.

Despite all, members of the movement called on the United Nations, the international community, and the participants in the Oslo Summit to work for an inclusive and decentralized government in Afghanistan and put pressure on the Taliban to respect human rights, including the right to education, work, civic and political activism.

The women protesters thus called on Norwegian Foreign Minister Anniken Huitfeldt to put pressure on the Taliban not to suppress women’s protests and detain and torture them under false excuses.

The women protesters in Kabul say that the Taliban, through their “inhumane” actions, have forced many women and girls to flee, as well as imprisoned, beaten, and even killed. In addition, the women claim that the Taliban have even gang-raped protest girls in some cases.

The Women’s Movement for Justice and Freedom cites a report (Persian Independent) as an example of the forty protesting girls detained in Balkh province who were detained by the Taliban on September 8, 2021, and said that the women protesters were tortured by the Taliban. They were then gang-raped and then shot.

According to the movement, of the 40 girls detained, nine died under Taliban torture, eight were found in different parts of the city, and nine are still missing.

Thus, the women members of this movement have also called on the international community not to leave the Afghan people alone and to support them until peace is restored in the country.

On the other hand, the Women’s Movement for Justice and Freedom has also called on international human rights organizations to continue their humanitarian assistance to the poor people of Afghanistan and to closely monitor the distribution of such assistance; Because they believe that the real needy in the country have been deprived of global aid due to ethnic considerations.

Besides the protest movement of the Women’s Movement for Justice and Freedom, some women in Balkh have protested on the first day of the Oslo Summit and the beginning of talks between members of Afghan civil society and the Taliban over the killing of Zeinab Abdullahi, imprisonment of Alia Azizi and the unknown fate of two women protesters Who were recently detained by the Taliban in Kabul.

In a video released of the protesters in the north of the country, the protesting girls demanded their human rights and stated that they would never remain silent.

The protesters condemned the Taliban treatment of women protesters by chanting slogans such as “What was Zeinab Abdullahi’s sin?”, “Where is Alia Azizi?”, “Justice, Justice, we are tired of captivity” and “Genocide is a crime.”

The protesters also called on the United Nations to end the humanitarian crisis in Afghanistan since the takeover of the Taliban.

However, protesters of a separate women’s movement in Kabul criticized the composition of the delegation that went to Oslo as women representatives, saying that the composition invited to the Oslo summit was not acceptable to them.

“As a woman protester who fights daily against Taliban injustices, I do not accept Shinkai Karokhail and Mahbouba Seraj as Afghanistan’s female representative at the Oslo summit,” the protesters added with a similar message in the video.

One of the protesters said that the women who attended the Oslo summit had been working on the project for years and had never worked for women in Afghanistan, and now they are attending the summit for their gain and power.

They also stressed that women protesters on the streets of Kabul should be invited to the meeting, so that the talks do not end in favor of the Taliban, but take into account the rights of all Afghan women.

The protests come as the Oslo summit in Norway takes place, and the Taliban delegation began talks today with women activists and members of Afghan civil society.

Meanwhile, a large number of protesters abroad have protested the Taliban’s invitation to the Norwegian government, saying that the Taliban is responsible for the current crisis in Afghanistan and that inviting them to the summit should not provide an opportunity for their recognition.

The Norwegian Foreign Ministry, however, had said before the meeting that holding the Oslo summit did not mean recognizing the Taliban.