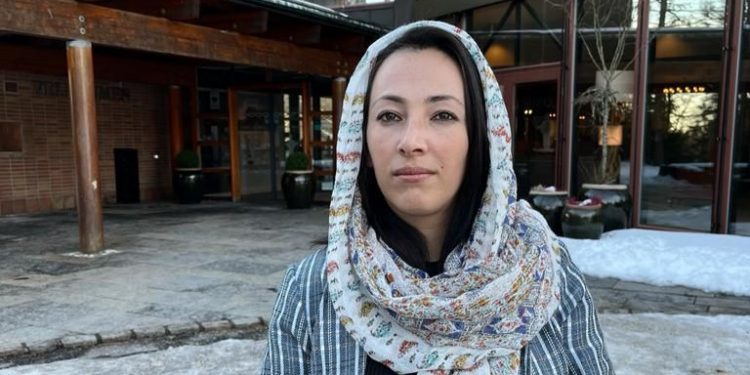 Hoda Khamosh in an interview with Nimrokh; I do not trust the Taliban

Interview with Hoda Khamosh, representative of Afghan women in Oslo

I am very afraid that they will hurt me, but I do not want the fights to fail due to my absence, and I did not come here for myself, we came to be the voice of 18 million Afghan women.

Nimrokh: Tell us the latest news about the summit, please.

Answer: The last meeting we had was with the heads of government, ministers, and representatives of different European countries, Italy, England, France, Germany, and Qatar. What we did through the talks with the Taliban and governments were legitimate demands that we can negotiate for the development and peace of Afghanistan to achieve results.

Answer: Today, only the result of the last two days will be clear and everyone may return.

No! We had two important meetings that took place and we talked, and the final result that has to be reached goes back to Norway, which is our host and will make the decision.

Nimrokh: Many protesters in Kabul believe that the women present at the meeting cannot fully represent them. Do you agree with this talk?

Some may. But the great efforts of the delegates for the liberation of Afghan women, their rights, and the voice they raised for the rights of Afghan women are admirable. They demanded the serious attention of the international community and the heads of state to the people.

Nimrokh: Some say: Being in Oslo and sitting at a table means recognizing the Taliban, what do you think?

Answer: Although we were told that these meetings would not make them recognize the Taliban. The warnings we gave to the Taliban have not yet been implemented, so what really happens in this meeting and behind the scenes of this meeting goes back to the end of this meeting whether we can get a positive result or not.

Nimrokh: What do you think the United States and Europe are expecting of this meeting? What are their demands from the Taliban and women representatives?

Answer: I do not think this negotiation will end with the recognition of the Taliban, because the countries that are represented here at this meeting, before they started their speeches, said that it would take a long time for us to recognize the Taliban because they must gain our trust then recognition process will go on.

Nimrokh: On the margin of this meeting, did you gain any positive or negative results?

Answer: Not for me yet! Because my first request to the heads of government was to pay serious attention to the women of Afghanistan and my request to the Taliban was the release of the girls who are being held captive. We have not yet reached a favorable conclusion so that we can believe this meeting or coming here is a positive outcome for us and others who have been here.

Nimrokh: Have you received any action or reaction from people or certain people in the hotel or conference room? Because people continue to protest behind closed doors?

Answer: No! There has been and is no reaction, I assure you, but it is not clear what will happen next. We were able to have a good meeting hosted by Norway, but I do not know what the outcome will be later.

Nimrokh: We heard your speech in the first two days. How did the Taliban react to what you said?

Nimrokh: Would you tell us your analysis of the current situation in the country and the Taliban?

Answer: I can not predict because I do not trust those in power there not to oppress the Afghan people more and to be able to cope with the Afghan people, especially freedom of expression, women, women’s rights, and the right to education. If they do not cope, it will turn into a catastrophe in which they will harm the people.

Nimrokh: You have worked in literature for many years and worked as a women’s rights activist. How do you see the continuation of the women’s struggle?

Nimrokh: Protests in front of Norwegian embassies around the world are a declaration of support for the rights of Afghan women, and their demand for the Taliban not to be recognized, what is your opinion?

Answer: It can coincide with the protests in Afghanistan at the same time and our voice can be heard not only in Afghanistan but also in Europe and other countries so that we can achieve the desired result. I welcome this support and thank them for their support of us.

Nimrokh: What do you think is the view of the United States and Europe on the new situation in Afghanistan?

Answer: They think that Afghanistan has fallen into disaster by coming to the Taliban in power after its rise and democratization, from my point of view.

Nimrokh: Now they see the catastrophe, do they have a plan for Afghanistan’s future?

Answer: We have emphasized the need to put direct pressure on the Taliban and ask heads of governments to think about the future of Afghanistan to have the right to inclusiveness for the people and youth of Afghanistan.

Nimrokh: What is your message for Afghan women?

Answer: Do not give up the fight, keep going, we will reach the result. If the world does not see these protests, it means they leave Afghan people alone and we will stand with every injury and every repression until we reach our rights. The gradual death that we sit at home is worse than the death that we are deprived of our rights and aspirations.

Nimrokh: You bravely made your demands at Mr. Mottaqi, who replied: Come to Kabul to talk about it, is your return to Kabul logical in these circumstances?

Answer: I am very afraid that they will hurt me, but I do not want the fights to fail because of my absence, and I did not come here for myself, we came to be the voice of 18 million Afghan women.