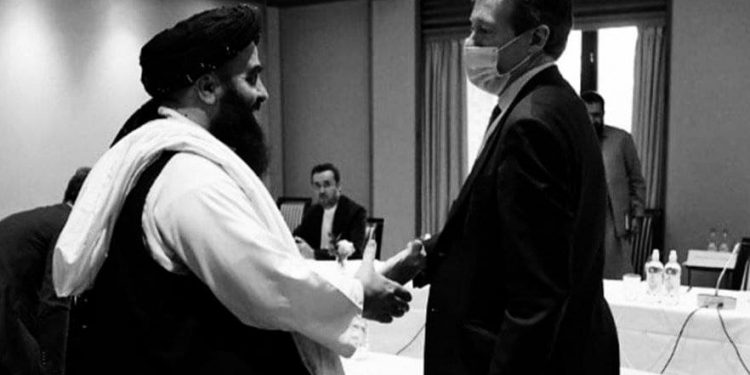 In Oslo diplomacy, the Taliban the European Union, and the United States are two sides of the same coin. Forty million people are on the field, making decisions for them by playing heads or tails.

The concept of fundamentalism in Afghan traumatology is rooted in ethnicity and religion; the Taliban are man-made. They are not real, they have emerged to break the principles and rules of democracy, morality, and human dignity, and have always been the puppets of ideological states. Mercenary soldiers of Middle Eastern radicalism.

The discourse of democracy in Afghanistan over the past twenty years has been articulated in terms of the people, freedom, human rights, women’s rights, and so on. Over the years, rival discourses, like ethnic fundamentalists and the Taliban, have prevented the hegemonic discourse of democracy in Afghanistan. As the United States and European countries erred in making hasty and unfounded decisions on the internal affairs of Afghan society, its outcome led to different and sometimes contradictory strategies. Lack of attention to Afghanistan’s internal affairs, its historical, ethnic, cultural, political, and ideological complexities, led to their failure to suppress the Taliban, the phenomenon of terrorism and instability in Afghanistan.

The arrival of the Taliban is equal to human rights abuses, violence, beatings, starvation, and poverty, the loss of women’s rights, the imprisonment of women protesters, the looting and rape of women, the massive influx of migrants, the deprivation of liberty and the homelessness of Afghan women. What did the diplomacy with the Taliban and what is its strategy? Are European countries and the United States seeking to recognize the Taliban? The Taliban’s participation in the international arena automatically provides an achievement for them and a concern for the Afghan people.

Diplomacy in its formal application is a dialogue between the representatives of nations, why those on the UN blacklist are flown to Oslo by the Norwegian government private jet under the name of Afghanistan’s representative, allowing travel to the Taliban, covering up the group’s crimes and giving opportunities to them are for more interaction with European countries. Their invitation makes the group more courageous in its use of violence, because in the last 27 years, especially after August 15, 2021, when they seized power and interacted with many countries, no positive change has been seen, but human catastrophes have occurred.

In Oslo diplomacy, the Taliban the European Union, and the United States are two sides of the same coin. Forty million people are on the field, making decisions for them by playing heads or tails. Dialogue between these countries means that they support extremism and accept the Taliban ideology that will not change. The dialogue will only work if the Taliban allow the people to form a free, inclusive, and decentralized government in transparent elections.

The only positive approach to the Oslo summit is to invite female civil society activists as Afghan women representatives, those who have spoken out to demand and realize women’s rights. Can we trust the Taliban who tortured, killed, and detained people, especially women during the last six months? Is it possible to achieve as much freedom as in the last twenty years in bargaining? How are the women’s petition process for returning to schools, universities, jobs, and governmental jobs done and who is responsible for it?

In fact, the strategic land of Afghanistan, without a responsible government, is the target of imperialist attacks by neighbors on the one hand and developed countries on the other. Pakistan with military imperialism, India with cultural imperialism, and Iran with its multiple policies towards Afghanistan (sometimes military and sometimes cultural and political) are trying to plunder this nation. Afghanistan is now a battleground between the East and the West. When the United States and its allies were in Afghanistan, the Easterners, with the support and equipment of the Taliban, made our days bitter, but now the opposite has happened. In today’s sense, everyone seeks control of each other, and only Afghanistan, as the arena for other governments, is attacked with any excuse and loses its women, children, and people.