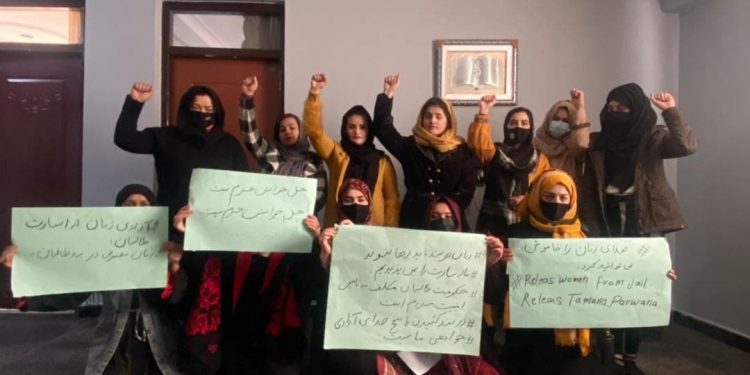 The Spontaneous Movement of Protesting Women has protested the perpetuation of captivity and the unknown fate of women detained by the Taliban. They say the group is still persecuting and threatening women protesters.

In a protest movement, the movement said on Tuesday(Jan 25, 2022) that more than eight days had passed since the women protesters were detained in Kabul, but their fate was still unknown.

They say they do not recognize the Taliban as a government and the world should not ignore their demand.

“The Taliban totalitarian regime continues its tyranny, perpetuating its unjust ethnic-ideological domination of the people,” the protesters added.

According to them, all voices of equality, resistance, struggle, and protest, whose only desire is equality, universal participation, bread, prosperity, work, and freedom are repressed.

Meanwhile, Zabihullah Mujahid, the Taliban’s central spokesman, told France Press that they had the right to suppress their opponents.

However, the Spontaneous Movement of Protesting Women warns that the Taliban continue to use violence, arrests, and repression of protesters, while the world not only watches but also legitimizes the group by holding meetings.

Protesters consider the Oslo summit as a clear example of world observation of the situation of people and women in Afghanistan.

The Spontaneous Movement of Protesting Women has said: “The hosts of the international meetings should take the executive guarantee of the release of the imprisoned protesters.” The protests came after the detained women protesters were still in custody and their fate is unknown. And the Taliban always deny their detention