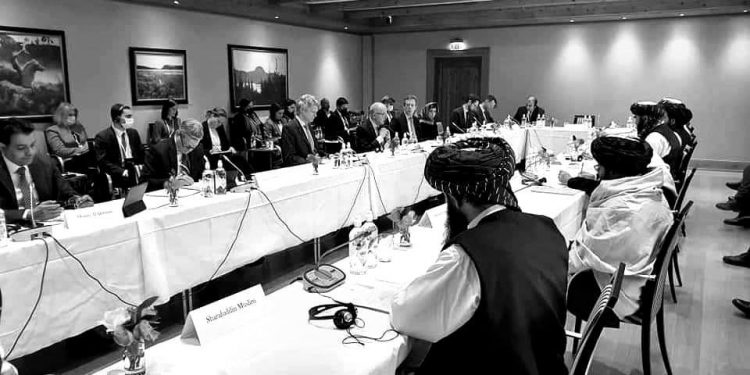 The third day of the Oslo summit in Norway ended. A meeting that had a lot of margins. Several women activists, including participants in the meeting, say: that such meetings provide an opportunity for recognizing the Taliban. The Norwegian Foreign Minister is scheduled to brief the UN Security Council on the outcome of the meeting today, but is the outcome of this meeting what Afghan women expect?

“My conception as a participant in the Oslo summit is that the Taliban should not be given a tribune, but the world decides on its interests,” said Shahgol Rezaei.

Emphasizing that global legitimacy depends on domestic legitimacy, she added: “The Taliban do not deserve to be recognized.”

She added that Afghan women representatives at the Oslo summit presented a different version of the Taliban’s one-sided narrative to the world.

Meanwhile, Narges Nahan, the former government’s Minister of Mines and Petroleum, says that although the world claim that doesn’t recognize the Taliban, all indications of a government’s recognition can be seen in the world’s interaction with the Taliban.

“Countries around the world are meeting with the Taliban and arranging large-scale international programs such as meetings for them, which shows the world’s desire to recognize the Taliban,” she added.

She, who was invited to the Oslo summit but did not attend, says she sees the process as questionable in the way it was going and believes that such a meeting would benefit the Taliban more than the women of Afghanistan. The tough situation of protesting women will increase significantly after the Taliban return from Norway and increase pressure on women and women supporters. The United States and its allies will undermine various values, including human rights and women’s rights, by engaging with the Taliban, given the extent of competition with other powers.

Farahnaz Mostafavi, a female activist in the country, says: “Giving such an unofficial stage to the Taliban terrorist group means nothing more than recognizing this group.” The world will not recognize the Taliban unless it fulfills its global obligations, including the formation of an inclusive government, respect for human rights, including women, girls, the fight against terrorism, and non-cooperation with other terrorist groups. Rival US countries, which sometimes play an important role in the situation in Afghanistan, were not present, and this may affect the outcome of this meeting.

“The Taliban must change their policies and treatments towards women,” said Shinkai Karokhail. On the second day of the Oslo summit, Afghan women representatives declared that holding the summit would legitimize the Taliban and that the world should not allow such meetings to recognize the Taliban. They stressed that countries must consider the inclusivity, independent presence of representatives, and Afghanistan’s international laws and obligations if such dialogues are to be launched.

The Oslo summit came to an end the outcome of which is still vague and questionable due to the secrecy of the summit. The detained girls were not released and the Taliban did not make clear promises to the world about women.

Today (Wednesday, Jan 26) the UN Security Council is going to convene a summit about the Afghanistan situation, and the Norwegian foreign minister plus Deborah Lyons and Secretary-General of the United Nations are supposed to deliver information about the Oslo summit.