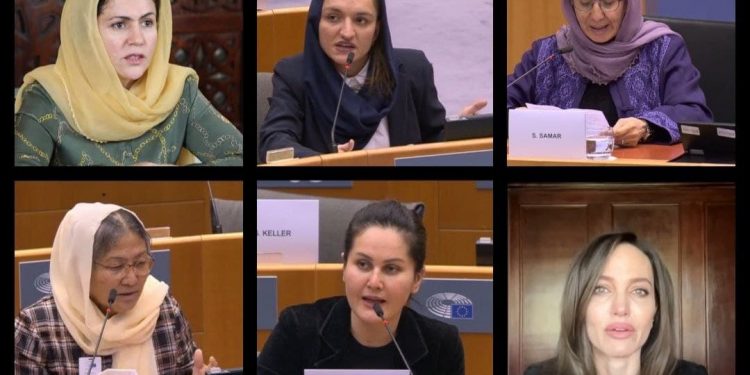 Afghan women’s protests from Kabul streets to the European Parliament

The President of the European Parliament, speaking at a meeting in support of Afghan women on Tuesday and Wednesday (February 1st and 2nd, 2022), said that the issue of Afghan women should be one of the world’s top priorities in dealing with the Taliban. The President of the European Parliament, Roberta Metsola, has also stressed that EU member states are firm in their support for Afghan women, and that respect for human rights and women’s rights by the Taliban is a precondition for any possible interaction between Europe and the Taliban.

The two-day meeting is also attended by a number of prominent Afghan women to address the European Parliament. Dr. Sima Samar, former Chairwoman of the Independent Human Rights Commission, who was one of the speakers on the first day of the meeting, described the current situation in Afghanistan as a collective failure and blamed the leaders of the republic and the international community for their lack of responsibility for human rights values.

Fawzia Koofi, a former member of parliament and leader of the Movement Of Change for Afghanistan Party, who delivered her speech online in an interview with Nimrokh said: “Afghanistan’s future depends on whether or not an inclusive government is formed in this country,” Ms. Koofi emphasizes that the Taliban have not yet made any practical commitment to forming a government that believes in human rights values. Rather, by depriving women and girls of the right to work, the right to education, and opportunities for political participation, the group has shown that they have no belief in human values ​​and human rights. Ms. Koofi called the two-day meeting in support of Afghan women in the European Parliament important and said: “This meeting is an attempt to prevent the fate of Afghan women from being forgotten.”

In an interview with Nimrokh, Sahraa Karimi, a filmmaker and former chairperson of the Afghan Film Organization, who is a member of the two-day meeting, described the holding of the “Afghan Women’s Days” meeting in the European Parliament as an opportunity to advocate for Afghan women’s human rights. According to Ms. Karimi, Afghan women in the European Parliament are trying to protest a questionable meeting with Taliban representatives in Oslo, urging the world not to give the Taliban a chance to maneuver and lobby.

Sahraa Karimi, however, stressed the importance of Afghan women’s unanimity in advancing a just struggle, stressing that Afghan women should avoid polyphony and be part of a global struggle to defend their human rights in Afghanistan.

Zarifa Ghafari, the former mayor of Maidan Wardak province, was another speaker at the two-day meeting. She blamed the international community for giving the Taliban a chance and stressed that influential countries in Afghanistan in recent years have always given the Taliban a chance to maneuver. The Taliban were given a chance during the peace talks in Doha. Unfortunately, this process is still ongoing. The Oslo summit was a false opportunity for a terrorist group. Ms. Ghafari blamed European countries for failing to meet their human rights obligations in Afghanistan, stressing that the Oslo summit showed that some EU member states were still making major mistakes in creating opportunities for the Taliban.

“We, the women who attended this two-day meeting, call on the European Parliament to hear the situation in Afghanistan and the issue of Afghan women from women themselves,” said Dr. Habiba Sarabi, who was a member of the peace negotiating team with the Taliban before the fall of Kabul. We expect the international community, especially the European Union, to take no further political intelligence approach to Afghanistan. Rather, by understanding the core facts and based on human rights values, they should seek a responsible solution to the Afghanistan conflict.

Aryana Sayeed, a music and singing artist, called on the international community to pay attention to the rights of Afghan women while performing one of her songs.

Angelina Jolie a famous Hollywood actress and artist also sent a video message to the two-day summit urging countries around the world not to make Afghan women more victims of violence and extremism by recognizing the Taliban.