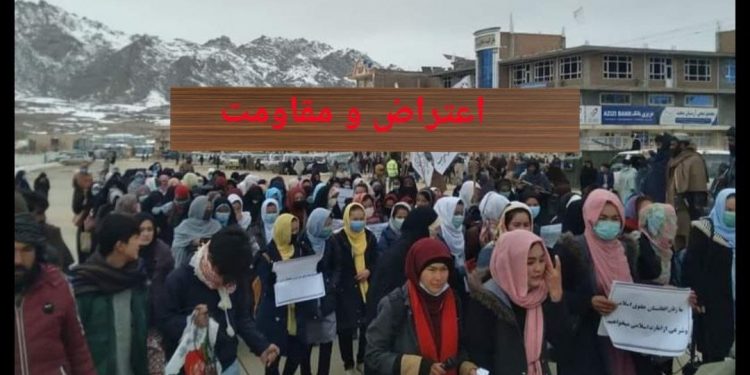 When the Taliban have not found a way to be recognized by foreign governments, they seek ransom from the United Nations and other countries by abducting and taking hostage women protesters in prisons and using other women as tools and threats to stage rallies and demonstrations. In fact, use women as bargaining chip.

Recently, a group of protesting women wearing black burqas and veils staged a protest march in Kabul, demanding the release of Afghanistan central bank reserves blocked by the US, and also insisting that women wear black hijabs and veils.

But some of these women in an interview with Nimrokh say that they were not aware of participating in the march and why they had to march. The Taliban had taken them from a mosque and taken them to the streets.

One of the women said: “I was participating in a book reading contest in the character of the Prophet. When the exam was over, a number of girls in black hijabs were said, ‘You have to participate in another program, and they guided us there.’ “When we arrived, a small number of women were on the streets with anti-democratic banners and the release of money from the US bank, and they gave us banners and told us to chant slogans.”

Also on Saturday (Feb 5, 2022), a group of women, including teachers, students, and girls’ school principals in Daikundi province, took part in a protest rally organized by the Taliban terrorist group to free Afghanistan’s frozen money. At least five of these participants confirmed to Nimrokh that they were forced to take part in the march at the insistence of the Taliban Education Department and the provincial Ulema Council.

Marziya (a fake name) a female teacher told Nimrokh: “One day before the march, the school principal called me and said that the female teachers in Nili had been invited to a program for tomorrow and should attend. If you do not attend, the education department will fire you or send you to remote villages. ” According to Marziya, a car rental fee of 500 afghanis was provided for each participant in the march. Marziya and several other teachers chanted “Death to America” ​​and “Death to Joe Biden” at the beginning of the march, which had already been coordinated, but suddenly slogan changed to “We want the right to education and girls’ schools must reopen”, and several other women on the other side shouted louder “Right to education, work, and freedom.” They all chanted “Education is our basic right and we will exercise it anyway.”

Eventually, when the slogan of releasing Afghanistan’s frozen money changed to the women’s right to education, work, and freedom, Taliban fighters dispersed the marchers. Also, the media was invited to broadcast the march.

One week ago, a number of women in Daikundi protested against the unfair distribution of humanitarian aid by the Taliban, but credible sources told Nimrokh that the Taliban had instructed their intelligence service in Daikundi to identify the organizer of the protest and detain women so that other women do not protest while forcing them to march for purposeful demonstrations.

But, female protesters who want their basic rights(Bread, Work, Freedom) are detained and tortured by the Taliban and this process is ongoing.