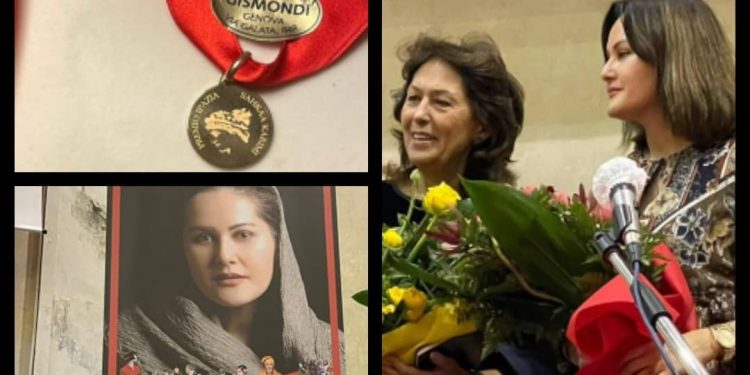 Afghan women are suffering from the Taliban’s attitude today, while they have been deprived of their rights throughout history. The film Hava, Maryam, Ayesha; is a picture of gender discrimination in Afghanistan. The film tells the story of three women from different classes of society in Afghanistan, each whose fate has been shattered by the gendered view of Afghan men. Despite the differences in the generation and social class of the characters in the film, they all have one thing in common: bearing the fate imposed on the crime of being a woman. This film is about the one-day lives of 3 different women. Hava is a traditional woman, Maryam is an open_minded woman. Ayesha is the symbol of the young girls of Afghanistan and the fiancée of Ayesha represents the new generation of Afghan men.

Men in Afghanistan’s previous generation are proud of their gender and women are despised for being women. They have created a highly patriarchal society.

Sahraa Karimi, as a woman, talks about her concerns in this film. Concern that forty years of war, humiliation, and violence have made the lives of Afghan women normal and devoid of ambition. Afghanistan has not had anything like the film industry for many years during the war. But people like Sahraa Karimi, who has made more than thirty short and documentary films and several feature films, have paved the way for this country. She was the chairperson(Afghan Film) and for making the film Hava, Maryam, Ayesha; She endured many hardships, from filming in the days when there were several suicides in Kabul, to securing the lives of the filmmakers and actors as well as actresses.

She holds a Ph.D. in Directing from the Slovak University of Arts and Film and has won numerous awards at international film festivals around the world over the years. Sahraa Karimi follows the philosophy of ontology or existentialism. The themes of her films also have traces of this thinking. Some critics of “Nasima”, which narrates the daily memoirs of an immigrant girl, consider it a poetic reminder of Nietzsche, Kafka, and Camus, a symbolic representation of Paulo Coelho’s book (The Alchemist). Some say she is more influenced by modern Eastern European cinema and the former Soviet cinematic tradition.

The Festival of the Best Women is held annually in Genoa, Italy; Sahraa Karimi, director of the film Hava, Maryam, Ayesha, won the International Hypatia Award; in admiration of making films inside Afghanistan with women-centered narratives.

Sahraa Karimi was present at the award ceremony, which was accompanied by the screening of the film Hava, Maryam, Ayesha. She thanked the support and unanimity of the Genoa Italian Women’s Festival and stressed that do not forget the women of Afghanistan. Do not let your politicians mistakenly recognize a totalitarian, terrorist and anti-woman group called the Taliban. My presence here today is not just for myself and for the award; But also as a messenger.

The messenger of all women in Afghanistan, who are currently imprisoned in their homes and the Taliban terrorist group has restricted all their rights, continue to seek to exclude women from social, political, economic, and cultural life. Afghan women want freedom, the right to work, education, and presence in society, unite with Afghan women, and do not forget them.

The Hypatia Award for Women’s Excellence in 2021 went to Ms, Sahraa Karimi. The event was attended by active citizens, cultural associations, political and humanitarian organizations, and journalists. A panel discussion entitled “Genoa for Afghan Women” was also held at the festival.

The Hypatia Award was created in 2010 during the fifth festival, in collaboration with local and national institutions, to honor one or more women who have contributed to the recognition of women in various fields through their work and profession. Sections of political, economic, social, cultural, and scientific life in Italy and the world. This award is also a tool to bring the great female characters of our time and the youth closer.

Sahra Karimi! is now an official member of the Slovak Film and Television Academy and has directed 32 short, long, and feature films. The chairperson of the Stockholm Film Festival jury is also one of her successful records. Dr. Sahraa Karimi has added a golden page to Afghanistan’s honor with her brilliant record, and this is the first time an Afghan woman has won the Hypatia Award.