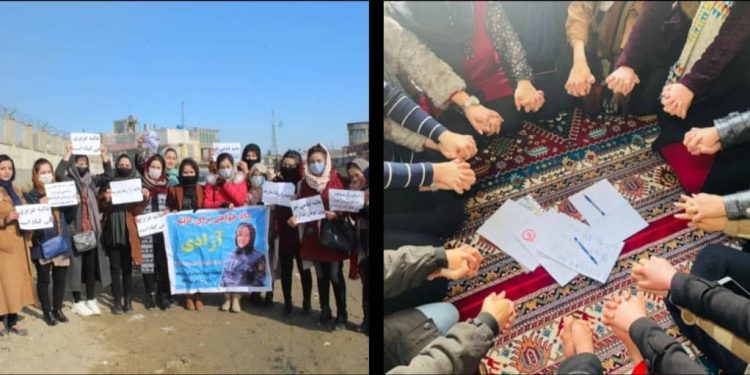 Inside six months struggle of women against the Taliban

If we do not consider the story of intelligence political games which has always been devastating for Afghanistan, now the confrontation between Afghan women and the Taliban terrorist group is the most fundamental and decisive equation in the political destiny of this country. Six months ago on this day, the Taliban entered Kabul following the escape of Ashraf Ghani and his corrupt gang. The city suddenly fell into disaster, terror and panic swept through the land in the blink of an eye. Six months ago, on such a day, the city was drowned in a flood of terrified people, as if everyone had woken up at once in the middle of a terrible nightmare. Hours after Ashraf Ghani’s escape and the arrival of Taliban fighters in the capital, the media, and social networks were heavily full of images of Kabul’s patriarchal and anti_feminist politics. From political leaders to senior government officials, everyone was among those who arrived at Kabul airport earlier than the people in a hurry. An escape that, at least ten days after the crash, became a more significant event than the crash. However, in the context of such a catastrophic situation, it was the Afghan women who took to the streets with a clear understanding of the situation leading to their socio-political exclusion and stood up against the exclusionary policies and violent behavior of the Taliban terrorist group. A presence that from the very first day, broke the phenomenon of fear and panic of the Taliban in the hearts of the people and sowed the seeds of hope in the desert of despair.

Now, after six months of breathtaking confrontation, Afghan women have become the mainstay of civil resistance against a terrorist group, beyond the Taliban, beyond the collective mentality of Afghanistan’s anti_feminist community, and even beyond the imagination of Western countries and world human rights organizations.

But the presence and civil struggle of women against the Taliban terrorist group has not been easy. Women have invested all their lives in this struggle. For several years now, women have seen the possible return of the Taliban as a serious and destructive force. Understanding that the Taliban’s hostility to women and human rights values ​​is at the heart of the terrorist group’s philosophy of existence was very objective and case-specific for Afghan women. Objectivity in exchange for a history of gender oppression of women in the land of beards, Dastars, and mettle.

Women were beaten and flogged on the streets of Kabul during protests these six months. All in the dreaded detention centers and torture chambers of the Taliban terrorist group.

However, the presence of women protesting on the streets of Kabul and other big cities has been small in terms of quantity. But for Afghanistan in terms of quality and effectiveness, focusing on human rights values ​​and political civil rights have been a valuable and decisive struggle. “Bread, Work, Freedom” is the main slogan of the women’s struggle for justice, the most fundamental collective demand of the Afghan people. The demand that women today have the honor of holding high the flag, and women’s shoulders, all six months alone and in the absence of men’s support, has lifted the burden and responsibility of this heavy and back-breaking burden. The pressure that only protesting women know. Women who experienced and retaliated against the Taliban for flogging, tear gas, and other forms of crime and inhumanity.

Although, this struggle has been fragmented in terms of order and coordination in stages. But many of these dispersions have been and are an inherent feature of civil and protest movements. Perhaps this property is calculated as the power and privilege of civil and protest movements, and one of the factors preventing value claims from falling into the cycle of political expropriation.

Now, six months after the rule of a terrorist and anti-civilizational group, the Taliban know what a crucial resistance they face to rule Afghanistan, also women know that in the Taliban’s extremist and terrorist thinking, women are removed and denied.

What intelligence games do to the Taliban is a question for which no worthwhile answer can be imagined. What is important, however, is that women have become the main, most legitimate, and decisive civil resistance in the six months against the Taliban and against all the shameful attempts to recognize this group.

Importantly, Afghan women now know that they are standing inside Afghanistan, making the meaningful demand for “Bread, Work, Freedom” and around the world, they try to stand up to the shameful attempts to establish a terrorist group as a government in a land called Afghanistan.

The important thing is that women are now on the side of a situation in which the mask of false and fundamentalist slogans has fallen on the face of anti-feminist and patriarchal politics, and women are on the side of their objective realities and fundamental issues. More importantly, women now know that their struggle is hard, breathtaking, and long, that their demands are the most fundamental human rights, and that their struggle is the most decisive political civil movement for today and tomorrow in Afghanistan.