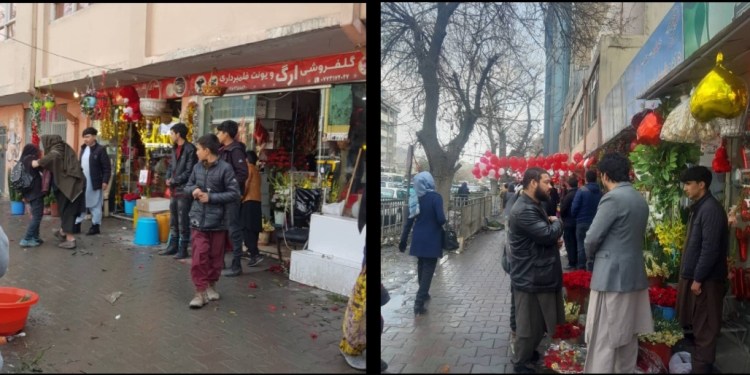 This year, there is no sign of the glittering celebration of Valentine’s Day in Kabul. The glorious celebration that took place in previous years of this day is turning counterclockwise this year. Before the Taliban took control of Afghanistan, Shahr_e Naw Flower_selling alley and Pole Sorkh, the beating heart of Kabul, were one of the busiest and crowded places in Kabul on Valentine’s Day. But this year, the streets of Kabul were adorned with red flowers, red bears, confectionaries, and red_coloured and heart-shaped chocolates, which looked gloomy and black a few hours after the Taliban attack, blowing up balloons like bombs and popping flowers.

Every year, lovers celebrated this day to immortalize the romantic memories of their lives; It was as if they knew that everything would be blown away one day, and they seized the moments and enjoyed being together. Buying gifts for each other, walking the streets of Kabul, and drinking coffee in cafes were common but valuable things that lovers did on this day.

Book and painting exhibitions were dramatically seen in the streets. Under the pretext of this day, the culture of reading books and holding exhibitions among the people and other entrepreneurs were increasing. Many reports of Valentine’s Day mood were published in print and video media. The lives of those who had come together after many ups and downs of love were narrated.

The life of this romantic living and watching in love in Kabul was very short. All this beauty faded; Cafes, restaurants, and florists no longer do what they should to celebrate the day. However, in the past, due to the traditional nature of Afghan society, most loved ones could not leave home on this day and live for themselves and their love for one day. But in all the worries and apprehensions of celebrating this day, little by little, culture was being created.

Six months have passed since the fall of the Republic; In these six months, the citizens of Afghanistan are experiencing a setback that is far from the imagination of the young generation of the last two decades of Afghanistan. Restrictions on the most basic affairs of citizens, violation of citizens’ privacy, and anti-feminist reactions cause people to live in fear of their lives that they do not like. An example of this horror can be seen in the eyes of a city that once fascinated everyone with its colors, but now it is as if they are mourning for the city; Nothing is visible but the withered and gray city. Muslim is a citizen of Kabul. He is afraid of celebrating Valentine’s Day in the current situation in the country; Because he thinks the Taliban may interrogate and torture him if they see him with his girlfriend. “Torture is not only supposed to be physical, but it can also be mental,” says Muslim. Before the arrival of the Taliban, Kabul looked fresh. Red balloons and red flowers made Kabul more beautiful.

Florists had more customers than usual. Besides, the flower shops, working children had a bouquet for sale and insisted that you buy it as a gift for your beloved. Today, not only florists in their luxury shops but even working children do not have customers and can not earn a living for their families. To get a complete picture of how to celebrate Valentine’s Day and sell flowers, I head to Shahr_e Naw Flower_selling alley. An alley that is known for being romantic and its charm became more and more on Valentine’s Day. In this alley, I met Farhad. This year, unlike previous years, he has decorated his shop less and is looking for customers. I ask him about his sales these days, whether he has a customer or their sales are the same as they were on Valentine’s Day years ago. “Government is not Valentine’s government,” he sighs. “Before, we used to earn 15,000 afghanis a day. Now we can not earn even 1,000 afghanis a week.” This shop in Flower_selling alley is a small example of the bankruptcy of the flower trade and its sale in the country. Most shopkeepers in Shahr-e Naw and Pole Sorkh pay the shop rent without getting any benefits.

Before, most of the flowers were imported from India, which has now been reduced to a minimum. I ask Farhad, has he ever had an order for Valentine’s Day like last year? It was clear from his face that his answer is negative. “Until now, I did not have a single order, not even one. In the past, people used to take flowers to visit patients, but now no one buys flowers to visit,” he says.