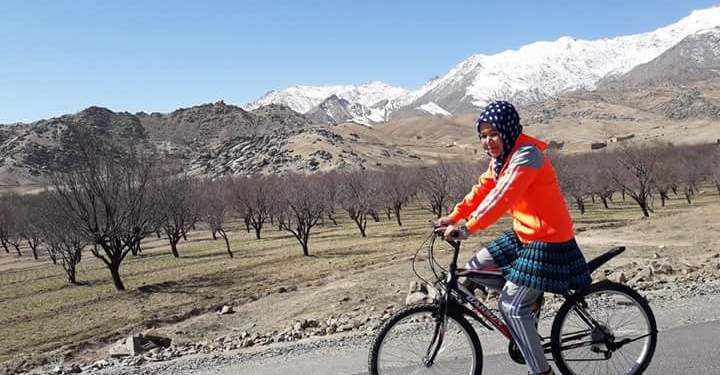 Ozra Shokran; From encouraging cycling among girls to house arrest

Six months ago, all the aspirations and dreams of Afghan women were shattered overnight, Ozra Shokran a woman from Daikundi who was a pioneer at encouraging cycling among girls was condemned to house arrest and now is disappointed.

In an interview with Nimrokh, Ozra talks about her achievements and aspirations; If this situation continues, there is no hope for women and girls in Afghanistan. Ozra Shokran is a graduate of English language and literature from Bamyan University, who graduated in 2016. When she was a student, she started cultural, social, and civic activities, and then, when she returned to Daikundi, she worked for government offices and foreign institutions, and also took charge of the Daikundi Girls’ Cycling Federation.

For the first time in 2016, a bicycle competition was held by Oxfam Institute in Nili, the capital of Daikundi province. Faeza was announced as the winner of this competition. The competition shocked the traditional community, especially religious scholars, and became controversial on local media and social networks, but the competition was the first step in encouraging girls to become cyclists. Despite strong opposition from the people and religious scholars, girls in Nili, the capital of Daikundi province, used bicycles to go to school and the bazaar, and in remote districts, female students also used motorcycles.

“Now all women’s sports activities in Nili city and districts have been stopped and families do not dare to send their daughters to sports clubs for fear of the Taliban, Women’s cultural, civic and social activities are still suspended, and all women activists are forced to stay at home and do not dare to walk freely in the city, and some have migrated,” Ozra said.

“The group does not adhere to any of the principles and rules of humanity, and this makes it impossible for women to walk freely,” she said, criticizing the Taliban for violating general amnesty. “They say we have announced a general amnesty, but they do not adhere to the same principles and rules that they have created, and we are afraid that a woman will not be harassed for cultural and sports activities in the past.”

Ms. Shokran also emphasizes that the restrictions imposed on women’s commuting are intolerable for them and that this has led to an increase in domestic violence against women. There have been several cases of women committing suicide since the Taliban came to power, and the continuation of this situation is causing psychological problems for women at home.

The narration of the fall of Daikundi province

Now that I think about six months ago, I remember the bitter memories and the beginning of our dark days and destruction. It was Thursday, August 12, 2021, when residents of Nili, the capital of Daikundi province, began to flee to remote villages and areas, and families fled the center using any vehicles. The car fare, which used to be four hundred afghanis, was up to two thousand afghanis. When the atmosphere of fear and panic prevailed everywhere, we could not tolerate the city of Nili so empty and full of terror, so we moved to the village with my husband and son. On the way with dry throats, troubled hearts in the dark air, and around the dirt roads of Daikundi I thought of Taliban with black dastars and angry eyes; In those conditions, some opportunists were involved in robbery and theft, stealing passengers’ money, mobile phones, and even their rings and watches.

When I got to the village, I started to collect all the documents, from school to university and my work certificates, as well as the suitcase of my favorite clothes that I was sure I could no longer wear. I wanted to burn them or bury them somewhere, but I could not, and my family and I hid them somewhere.

It was Sunday, August 15, 2021, when the Taliban entered the city of Nili at five in the morning and installed their flag on the entrance gate of the provincial building.

The Taliban faced an empty city, and that day was equal with the end of my hopes and aspirations and the beginning of house arrest! I hate that day and that date, hoping for freedom!

Ozra Shokran asks the international community not to recognize the Taliban in any way, not to leave Afghan women alone, to listen to their voices, and to support women’s resistance to Taliban policies.