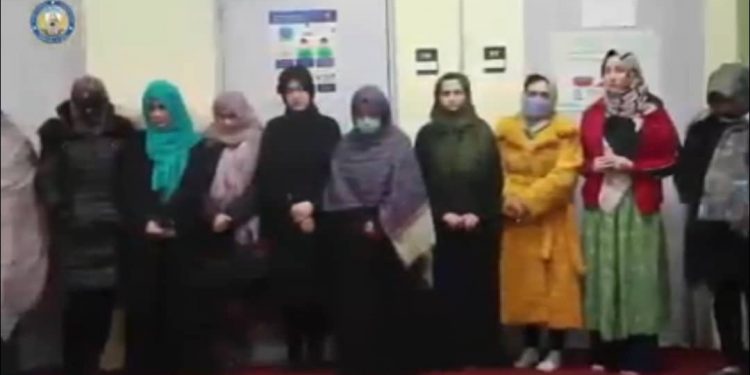 Who took advantage of the political silence prescription?

The video of the forced confessions of women prisoners, which was published on the Taliban Interior Ministry’s website, was met with widespread public reactions. In this video, women with pale and frightened faces express their regret over their protests against the Taliban, while looking at the people behind the camera; They are trying to name some women outside Afghanistan as the managers of the protests. It is easy to understand that women are being pressured and threatened to say what the Taliban want in front of the camera. Two weeks passed since the arrest of these women and the release of the video of their forced confessions, But the question is why in these two weeks the “political silence prescription” was filled by some individuals for families and other women activists, and whenever women’s rights activists wanted to spread the news of detention on media they prevent it.

But the call for silence began when Rina Amiri, the US special envoy for women’s rights in Afghanistan, first posted the arrest of 29 women on her official Twitter account, and the post was removed 15 minutes later. A short tweet that spread widely in the media; But after a short time, neither the domestic nor the foreign media followed up on this issue; So that even in the women’s groups, the issue of the detention of the protesting women was boycotted, and the news about it was released in small amounts and even unreliable. In these groups, sometimes the news of their release was shared, and some said that they are in good condition and no danger threatens them, and they will soon leave Afghanistan. If we want to review the issue of women prisoners in the last six months during the second period of the Taliban regime, we have to go back to last November, when the imprisonment of women protesters in Balkh province, like the 29 women in Kabul, was boycotted and only when «Nilofar Langar “published a report on the arrest and torture of women in The Independent; The issue of female political prisoners in Afghanistan was raised.

Unlike women activists in Balkh whose detentions were ignored by media despite they were tortured, activists in Kabul, like Tamana released a video of themselves while the Taliban arrived behind their apartment gates in January. The video spread within hours and drew the media attention and public opinion inside and outside Afghanistan. The arrest of several other civil society activists coincided with the Oslo summit which prompted Afghan women to walk out to the streets instead of remaining silent. This issue became so serious that the Norwegian government decided to invite Ms. Hoda Khamosh as female protesters representative in their meeting with the Taliban. At the same time, protests against the Taliban took place in many countries. The Western media, following the detention of girls by the Taliban, provoked criticism in Western countries, and many discourses the decision of the current governments to leave Afghanistan was hasty and irresponsible.

But the question is, after all the efforts and protests that were made to liberate women put the Taliban in a tight spot. Why this time, the detention of 29 women from (safe houses) in Kabul was met with suffocating silence, a silence that has a more political reason? Indeed, who prescribes the “prescription of silence” in society and for Afghan women?

The fate of the women, who repeatedly took to the streets during the same period and petitioned for the release of Tamana, Parwana, Alia, Zahra, and Mursal, is now unknown.

Now the question is, is not the version of political silence that is prescribed for women these days by some individuals related to the hosting of Western countries? Unconfirmed reports suggest that London will be the next host.

Is calling for the political silence of protesting women who have been holding protests, and press conferences in Afghanistan and abroad over the past six months not just to protect the Taliban from public outrage inside and outside Afghanistan?

Are Western countries consulting with the Taliban again, and do they want the media and social space in the West to be away from sensitive issues such as the violation of women’s rights by arbitrary detention to prepare to host them? With all these unanswered questions, there is more and more doubt when we see the two-sided policy of the United States and Western countries regarding the Taliban and the presence of Rina Amiri with a cover that affirms the view of women on the issue of women in Afghanistan. It leads us to the conclusion that the issue of women in Afghanistan is of no value to the United States and all its allies, and that they make any prescriptions by their representatives are injected into a society that is more in the interest of the policies of the countries themselves. Also, we should not ignore the media effectiveness and the criticisms that are made of the policies of the governments in the countries themselves. However, in this critique, the issue of Afghanistan and the Afghan woman may still be just a clinging point for certain groups. The continuation of this long-term silence is only in the interest of the Taliban and countries that are willing to cooperate with the Taliban.

With all these considerations in mind, it is the mission of civil society and women activists to be able to find their way and shift the matter and focus of the struggle from a reactive state to a dynamic one that is effective for a long time. Now is the time for our women to be able to organize women’s movements and set their own long-term goals with awareness of the dangers and pitfalls of intelligence. Otherwise, every move and reaction will be defeated and repressed. Especially at a time when the intelligence war is trying to poison the atmosphere of trust and solidarity of women by injecting misinformation. Remove and discredit the news about the detention of women from public and domestic and foreign media attention. The recent video by the Taliban showed how afraid they are of women’s protest movements, who want to ruin women’s unity and solidarity by any means possible, and how they are showing a softer face to the international community while committing violence against women inside the country. Defeating this act of the Taliban will be possible only by creating an atmosphere of trust and solidarity considering women’s values ​​and having long-term plans and proper organization.