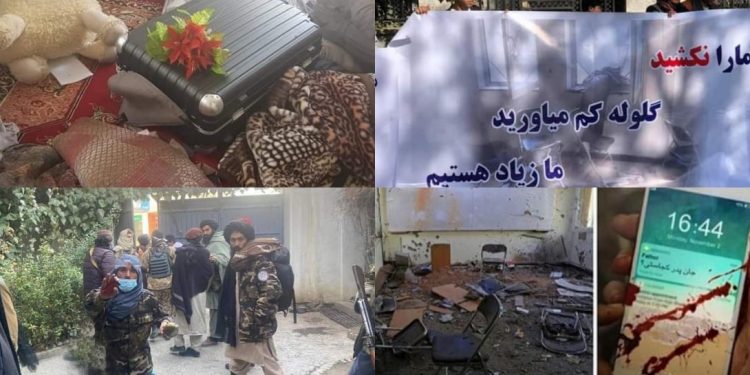 Taliban and expectation of being rewarded afterlife for killing people

The world has seen many calamities and pains in its lifetime, Afghanistan is the land of sorrow, a country that has never experienced a nation-state and has always inherited the frustrations of past failures for the future. The Taliban, as an Islamist militant group, is made up of Mawlawis for whom the killing of the people is the reward of their afterlife, and their interpretation is based on the ideology of religious fundamentalism as well as terrorist ideas, tribal and ethnic rules which have brought instability, insecurity, poverty, and hunger to Afghanistan’s pluralistic society for the second time. In mid-August 2021, Taliban fighters stormed into the cities from the mountains of Afghanistan in torn and old clothes, and then the government, with the help of its allies, handed over the country to them. Now, six months after the fall, we see the Taliban in the streets and bazaars, with expensive bushes, new clothes, riding in foreign cars left behind the previous government, heading to restaurants and entertainment venues, returning home at night and sleeping at home that one day was the home of a compatriot who fled Afghanistan because of fear.

The Taliban have not experienced the codified law of society in their lifetime and do not believe in civilization, because Shari’a is the basis of their thinking. They justify everything according to the Shari’a, the people have no bread, and poverty and hunger have increased in Afghanistan, but their Shari’a allows them to sleep on full stomachs while the children do not fall asleep from hunger. Schools and universities were closed, women protesters arrested, tortured, killed, and fabricated confessions made. Unfortunately, this shows that the Taliban are trying to legitimize their anti-human rights behavior and have returned to the first round of their rule. We are facing a group who did not comprehend the political, moral, and constitutional approach and consider the world according to their ideology. Political Islam and the Taliban are opposed to the humanities and empirical sciences, which is why no country with a political religion has been able to provide a factor for nation-building and governance. Perhaps the worst thing for the Afghan people is that the international community’s attention turns to the Russia-Ukraine war, and forget about the terrorist attacks, the tragedies that have taken place, and moves towards normalizing the acute Taliban issues in Afghanistan. Twenty years ago, they conducted house-to-house searches and tried to accuse people of something. Now, the bad news is that in the past two days, Taliban fighters have raided people’s homes in Kabul (Khairkhaneh), Tajik and Hazara areas and broke through the gates of the people and even searched the bedrooms, cellphones, and closets of women with savagery and violence. Of course, this action is also related to their behavioral subcultures. What kind of Shari’a is this that allows Mullahs to rob from people?

The formal confrontation between tradition and modernity begins from universities, as a base, that attempt to renew human thought and its connection to reason, logic, teachings, and beliefs. Today is the first day that universities open since the Taliban takeover, but with restrictions. Women should be separated from men, women’s classes in the morning and only with the presence of female professors, long and loose clothes in dark black is mandatory and the women’s dormitory is closed, girls coming from other provinces have no place to stay, so they have to drop out of university. Some girls who were studying in universities in provinces could not go to those universities, and there were many such problems and hardships. What is being taught now in universities, which are the center of political, religious, and social dissent? Do they teach religious issues or scientific issues?

If there is no interaction between the two views of men and women in the university and they do not meet each other, how to know each other better?

For example: if there was no male professor in medicine! Shouldn’t a female professor teach men? Or do they eliminate the whole field of medicine? How far can they separate men and women?

Often, our orientation or opposition is not to correct what the Taliban have done, our perception of the Taliban is not just a terrorist group but the extremist cancer syndrome in the world. The consequences of this catastrophe become clear when other fundamentalist groups emerge from the extremists, each of whom is like the Taliban around the world and seeking recognition in the international community as in the case of Afghanistan. Unfortunately, the Taliban think that they have enough merit and knowledge to govern and that they adhere to and dominate their ideological theories. While at best they may be able to implement their Shari’a, this is of no value to governance. According to the religion, the Taliban are Mullahs and Mawlawis who use violence, savagery, and barbarism based on the religion of Islam. It is a pity that this generation, which belongs to 1400 years ago, is supposed to manage the universities and train the next generation. The process of training people in Afghanistan is returning to the past and extremists accept the management of authoritarian people and this will be a serious threat to future generations and the world. Even if the world’s public mind turns to the other side and there is a projection towards Afghanistan, we will not sit still.