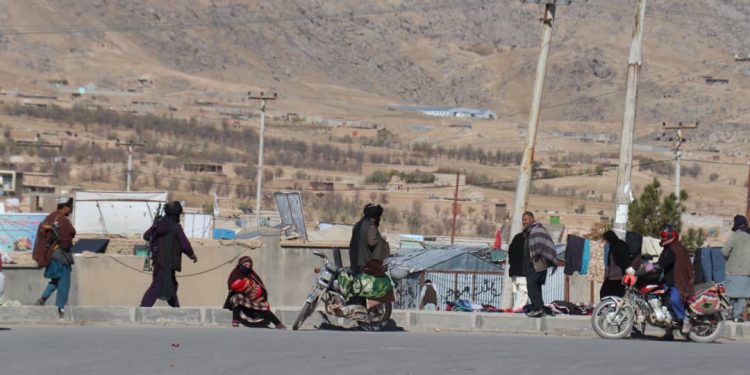 The Taliban prevent women from entering civilian offices in Daikundi

Credible sources confirm that the Taliban in Daikundi province prevented women from entering offices, citing the threat to Islam.

Sharifa Haidari (a pseudonym), a businesswoman in Daikundi province, said: “Four days ago, she went to the department of finance to process some of her papers, but was stopped by Taliban soldiers at the entrance gate.” “A Taliban soldier stood in front of me with a gun and said that the entry of women into the offices endangers Islam,” she said.

According to Sharifa, not only she but other women are not allowed to go to any Daikundi government office to follow up on their problems. Some other sources in Daikundi have also confirmed such cases. Meanwhile, six days ago (Sunday, Feb 31), a Taliban official in Daikundi made it clear in a public meeting that women’s freedom and presence in society should be prevented. “Where is Islam gone ?” Said Mawlawi Ehsanullah, head of the Taliban Complaints Commission in Daikundi.” Where is religion gone? You and I seem to follow Islam and Muhammad, but our actions are against the Shari’a. We allow our wives and daughters to talk to non-mahrams.”

The Taliban official explicitly called on the people of Daikundi to martyr their children to prevent such incidents. “Rise, fight against the infidels and the unbelievers. Be a martyr, martyr your children. What is the value of the head in front of religion? What is the value of a child in comparison to religion?” Apart from that, four days ago(Mar 2) in a ceremony held in Nili city, the capital of Daikundi province, to celebrate the second anniversary of the Doha agreement by the Taliban, the officials of the Department of Propagation of Virtue and the Prevention of Vice reacted to this issue.

“During the time of the Prophet of Islam, a woman passed a blind man. The Prophet Muhammad was angry at this woman. The woman said that Prophet, this man is blind, he does not see me. But the Prophet said, he does not see you, but you can see him, you are not a mahram to him and you should distance yourself. This issue must be considered by the people now.” Mawlawi Zekria said.

However, since the Taliban took takeover, no Daikundi office has accepted female employees and prevented female clients from entering. About a month ago, several women activists staged a civil protest against the unfair distribution of humanitarian aid, but a few days later, due to security threats, the organizer of the protest left Daikundi. In the latest case, the Taliban have launched a house-to-house search in all Daikundi districts, causing more panic among women and children.