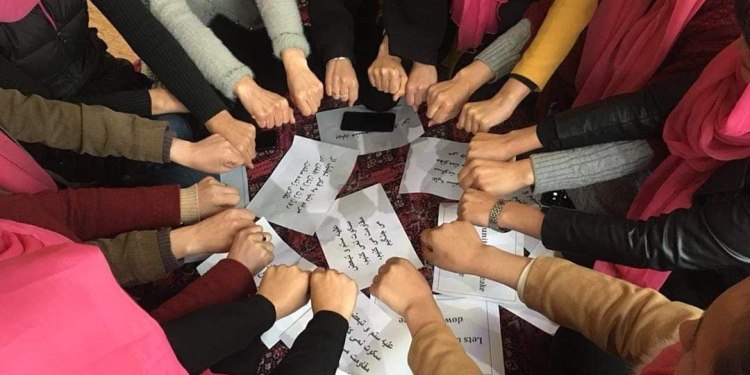 Let us strive to start a strong identity_based movement

If we skip congratulation messages on International Women’s Day, the main issue on March 8, 2022, for Afghan women is their global grief. This grief that dominated Afghan women is either due to being a member of an anti-feminist society or a gift of western countries( where freedom, human rights, civil and political values ​​, and the slogan of defending women’s rights are at the forefront of their colorful slogans)political and intelligence game in the new era.

Even a cursory glance at the political and intelligence-driven events of the United States and its Western allies in Afghanistan reveals how the Taliban terrorist group passed intelligence and through which political games took over Afghanistan once again. The role of corrupt statesmen and politicians, especially the corrupt and illegitimate administration of Ashraf Ghani, is also a serious factor in the fall of the Republic system of Afghanistan. But the bitter and undeniable truth is that the re-emergence of the Taliban in the territory and people of Afghanistan is a gift from the US government and powerful Western governments.

The re-emergence of a terrorist group in Afghanistan is a devastating catastrophe for the women of this country, who, after twenty years of access to education, are ready to rise to the demands of equality. With the return of the Taliban, Afghan women have been confronted with the historical enemy of their human identity in the cruelest way possible. With an enemy who, due to their ideological beliefs, does not respect the human dignity of women. Also because of the primitive patriarchal beliefs that come from the social upbringing of the country’s tribal culture, which have the potential to raise savage extremists like the Taliban.

If we are to celebrate March 8 as a day of hope for global unity and solidarity of women, it is up to us Afghan women to come together in the first step by crossing the political lines governing Afghanistan’s political relations to the core of our human identity, which is feminine. Then take practical steps for unity and solidarity that we do not yet have.

The experience of the last 20 years, and worst of all, the black experience of the past seven months, reflects the bitter reality that we Afghan women, even in the fight against a bloodthirsty enemy such as the Taliban terrorist group, are unable to find a common identity and address to defend the human identity and to fight the danger of elimination, which we face. The experience of the past seven months, unfortunately, is a testament to the bitter reality that the lack of a single identity address has made us Afghan women more vulnerable to victimization and exclusion from the social and political arena in Afghanistan.

Even if we leave aside the women rights traders and the project conductors plus several women who are trying to compliment the Taliban terrorist group due to ethnic relations, unfortunately, fragmentation, disorder, and chaos are big obstacles on the path of unity among women’s rights activists who struggle for equality. But all this does not necessarily mean that we Afghan women are not able to establish such an identity_based movement. Rather, the problem is that we have not yet taken action to start a strong identity_based movement.

If we leave out the expression of concern about the current situation and forget the loss of the last twenty years’ achievements; At a time when the sword of our identity enemy has reached our bones, we the women of Afghanistan need to take action to start a strong identity_based movement. practically, we women may not be able to achieve a single, powerful identity_based movement for many years.

But the problem is that until we can structuralize our advocacy struggles, we will not be able to do anything to defend our human rights and dignity in a land called Afghanistan.

The multiplicity and fragmentation of personal tastes and self-interest have led us to even enter into theoretical debates to create a powerful and influential identity_based movement of our destiny.

There is no denying that we Afghan women are the poorest women in the world. However, the way to get out of this simultaneous grief, which is a long and distant one, is not possible and imaginable without creating a strong identity_based movement on the part of us Afghan women. If we do not overcome self_interests or non-sense desires, unfortunately, neither counting on false slogans of Western governments can help us nor express concerns for the current situation.  We must unite and work to create a strong identity_based movement.