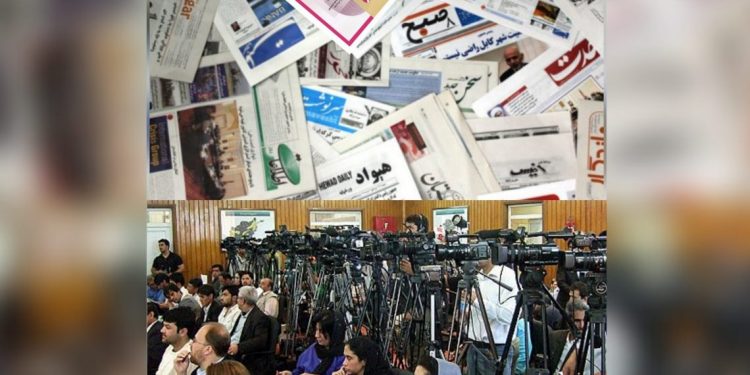 Imprisonment, torture, and censorship; gifts of the Taliban on National Journalists Day

In a world where the power of the media and journalists is the decider and it is believed that the media and journalists lead the presidents, prime ministers, and politics in one country, but in Afghanistan, something different is happening. The deplorable situation of freedom of expression and journalists in Afghanistan has faced serious limitations, which in turn has posed great challenges for journalists and a major obstacle to accurate and punctuate reporting of news and events. Since the Taliban took control of Afghanistan, the media faced widespread restrictions and the cessation of many entertainment and music programs as well as increasingly repressing and harassing journalists, especially female journalists. Women were barred from work and some media outlets barred female journalists from attending the media office. The colorful face of the media environment in Afghanistan has changed suddenly and dancing and singing removed from the visual media. With such conditions, journalism is one of the riskiest jobs in Afghanistan. Many journalists have been forced to flee their homeland and those who have remained in the country have either left the media and are confined to houses or work with caution and self-censorship. The limited number of women appearing in the media must obey the instructions of the Taliban, from the appearance to the content of the speech, otherwise, women can’t work in the media.

Hundreds of male and female journalists left Afghanistan after the fall of the Afghan government and the return of the Taliban terrorist group to power on August 15, 2021, and more than 40% of the media (about 578 media), including television, radio, online and print media were blocked for various reasons, including Taliban threats against journalists and lack of adequate funding. At the same time, the problems of other media are increasing every day. Censorship, vandalism, threats, torture, and arrests are some of the things journalists have faced in the last seven months. Since the Taliban takeover, access to information in Afghanistan has been unprecedentedly restricted, and the Taliban monitor the content of all active media outlets inside Afghanistan. Some journalists and media executives say: They have to send their reports and programs to Taliban officials before they can be published to get permission to publish; Otherwise, they may face violence from the Taliban. Officials from the Taliban’s Information and Culture Department in the provinces have warned all media executives and reporters to submit their content to the department before it is published for approval. The Taliban have appointed individuals as spokespersons for several departments under their control. Their responsibility is to control, monitor, or prevent media products.

Comparing the violence against journalists at the beginning of the year and the last seven months show, the Taliban and their suicide bombers committed thirty incidents against journalists during the Republican period and arrested at least 66 in the remaining seven months of the year during the Taliban’s domination. In most cases, detention was accompanied by physical violence, insults, and even torture of journalists, and most of the violence took place during the Taliban’s presence. In addition to the unprecedented increase in violence, threats, and restrictions on the media in Afghanistan, many television, radio, newspapers, magazines, and news agencies that have been active in Afghanistan for the past twenty years have ceased operations.

This is not the only challenge facing journalists with the advent of the Taliban terrorist group, but all of Afghanistan’s laws, including those regulations that regulate the media and disseminate information, have been suspended for the past seven months. The Afghan media is in an illegal trauma. The Taliban has instructed the media not to publish programs that would have a negative impact on public opinion against the Taliban.

Personal treatment with the media regarding access to information, interference of the Taliban in various parts of the media, is one of the problems that has arisen in the absence of clear law. Individuals from the Taliban Intelligence Office regularly go to prominent media outlets and give orders and prohibitions. “You are working under our rule, so you should publish what we say and you should not publish what we do not want,” the Taliban told reporters.

The Taliban are trying to exploit independent media by force, threat and pressure.

A day before the National Journalists Day, the Mawlawi of the Taliban terrorist group announced a new order to the Moby Group representative. The Taliban terrorist group banned broadcasting foreign drama series on Thursday night by order of the Ministry of Propagation of Virtue and the Prevention of Vice. The media group, including Tolo, Lemar, Tolo News, and others, were ordered to stop broadcasting foreign drama series. In this regard, TOLOnews twitted on (Thursday, March 17) that the Taliban Intelligence had announced the “definitive ban” on broadcasting foreign drama series on the Afghanistan televisions. The news was also included in the special news service at 6 pm, but hours after the news was published, the Taliban’s Intelligence raided the media building and detained Bahram Aman, the presenter of political news programs, and Khpalwak Sapai, the head of Tolo News and Nafay Khaleeq, the Moby group’s legal adviser. Two of them were released hours after arbitrary detention, but Bahram Aman remained in custody until Friday evening. With these interpretations, the celebration of Journalist Day, on a day when they continue to move towards more restrictions, is nothing but a tribute to the journalists who lost their lives in this way. Journalists have faced and will continue to face many uninterrupted challenges in the history of Afghanistan. Every day that is celebrated in the calendar as something or someone is a great subject for journalists to cover and report on. But who will do it for Journalists Day? In the oppressive atmosphere of Afghanistan and the Taliban, who are the enemies of media freedom and journalists. Freedom of expression in Afghanistan is one of the most important achievements of the last two decades, which is on the verge of certain destruction after the domination of the Taliban terrorist group.