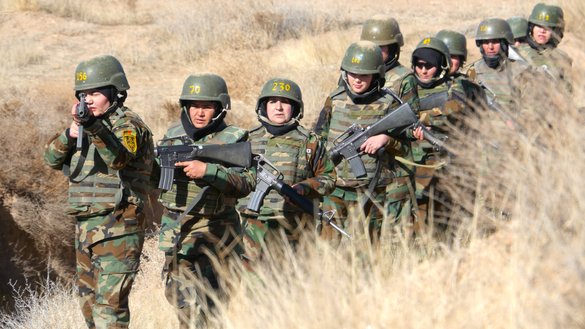 Mehriya an ANA officer; My other name is grief because I am an Afghan woman

When we talk about suffering; It includes all the suffering that a person can endure. But the suffering of an Afghan woman is the story of an eastern woman. Women who leaned on “nothing” and stood up. The women took advantage of their sufferings and kept up.

I see a woman with counted and regular steps as if a military parade is going on, speaking firmly and listening carefully. Her name is Mehriya and she was an officer in the previous government and worked in the Ministry of National Defense, she is twenty-six years old. I asked with a smile, how are you? Tears welled up in her eyes and she said, “Desperate and poor.” Like a mother whose child soldier was killed in the wars of the southern provinces, who are no longer remembered as martyrs and heroes, and whose grave is not decorated with Afghanistan national flag, like girls who have not gone to school for nine months.

In the spring of 2021, as the fires of war intensified day by day, Mehriya put on her military uniform and went on duty in the hope of a better tomorrow, assured that the Taliban or no one else could destroy the achievements of two decades of Mehriya and the people of Afghanistan overnight. When the provinces were falling one after the other to the black force with white flags she tried to help her Afghan counterparts and defense forces maintain the battle line so that they would not fall to the Taliban once again. She wanted to protect the people of Afghanistan, especially women, whose education is their right and who should not be treated as commodities in all cases.

She sighs and kisses her nine-month-old daughter and says:” When the Taliban were occupying cities, I was in my eighth month of pregnancy. I was on leave and used to watch news expecting to hear a piece of good news.” she continues. “I could not sleep for many nights and cried and felt sorry for my daughter who was about to be born and for the future I did not know what would happen.”

Her daughter was born just 20 days before the fall of Kabul, there was war in the northern provinces that night, and the news of the good resistance of the defense forces was spreading. Regret swells in her eyes and she continues, “The night Herat fell, I was completely disappointed, I cried for myself and for all the girls of Herat who were burning in the fire of war, but I did not think of the early fall of Kabul. I expected that resistance forms at the gates of Kabul and that it was impossible for all these forces to surrender and not resist. For myself and my daughter, I imagined at least an opportunity to leave Kabul and go to a place where my daughter could not hear the sound of panic and bullets in a few days after her birth, I did not think that the traitors had no mercy on anyone’s future.

On the morning of the fall of Kabul, I woke up to my daughter crying, as if she had already understood what was waiting for her. I felt bad, I could not get up and I got up with difficulty when my husband woke up and watched the news and sighed, I asked what happened? He said: The situation is bad. We ate breakfast and he went to work. I was trying with all my might to spend time with my daughter and I was thinking about her smiles and I did not know what she was thinking, what oppression we had that brought her to this world. It was around noon when there was a commotion in the alley, I asked the neighbor what had happened? “Kabul also fell, we must flee,” he said. I thought about where I can go, despite the situation I have! I had a very bad health condition. I called my colleagues, who were also returning to their houses, and told me: the house may not be safe, go somewhere else. I called my husband, he was also on his way home, it took him a long time to get home. The traffic was heavy and all the people had left their homes, many were moving out of fear and some were out to watch.

We also left our house and went to a friend’s house, I was bleeding profusely and I could not go anywhere for fear and it was difficult to get to the hospital because everyone had closed the gates of the hospitals for fear of looting their property. In the afternoon of the same day, all the police stations of western Kabul were emptied and the opportunists used to steal all the remaining equipment. I wonder, how all those organizations and forces could be reduced to ashes and everything to perish in a few hours, the Taliban could be seen all over the city until near evening, and I was exploding with rage, I was worried about my colleagues and those I knew. At night, the sound of bullets could be heard from everywhere, and I do not know whose life is ended, what family it hurt. The next day people were going to the Kabul airport. Many could leave the country but I could not go due to my situation and I never thought of going.

That afternoon we decided to go to Pakistan with other friends, I was thinking of nothing but where the sound of bullets would not wake my daughter. After one day we arrived in Quetta through smuggling, a strange city with cold and soulless people, everyone went to their friends’ house. The hot weather on the way and the hardships of my daughter’s journey pushed her to the brink of death, and as long as we could provide a place to live, I felt displaced worse than leaving my home and Kabul, everything remained in Kabul, life, memories, and smiles.

My soul is wounded, I am thinking of the nights of Kabul, of Pol-e-Sorkh, of an old man who used to sit at a crossroads and play the music of “Let’s go to Mazare_Sharif, Mullah Mammad Jan.” I think Pol-e-Sorkh is dead and girls with curly hair have been buried in a mass grave. I think of Simple Cafe, of the coffees that wait to drink, and of the tables that like to see the hands of a loving boy and girl tied around their shoulders. I think of book_sellers who are bankrupt, and I think of the books that find themselves in the bloody hands of the dirty-haired people who lean on the gun. Yes, I’m tired, my other name is grief because I’m an Afghan woman.