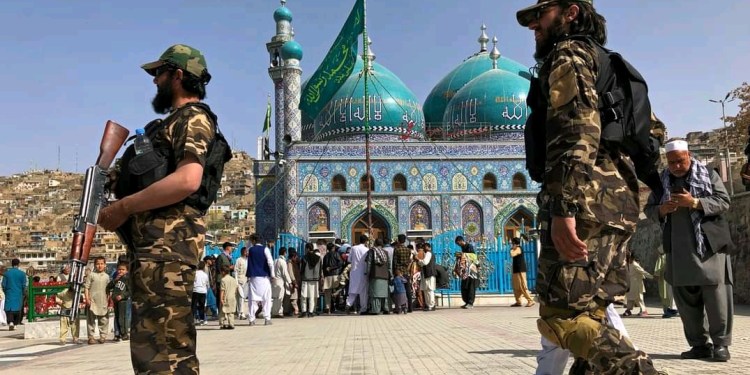 From Nowruz to Sizdah Be_dar; The women’s narration of entertainment combined with the harassment of the “Religious Police” of the Taliban

On the first day of Nowruz, we went to one of the amusement parks in Kabul. The presence of families with happy children and girls encouraged us. For a moment we thought life was back to normal. The smell of Espand spread from the street next to the park, a little further on, the smell of kebabs from the restaurant and beyond in the wooden hut, the sound of girls laughing and the smell of hookah, the sound of happy children with a group of women and girls, their excitement on the Ferris wheel and amusement train was heard. Middle-aged women put baskets of bread and pots on the grass, watching the excitement of the children on the playground equipment, waiting for everyone to gather around and eat their lunch together.

It was about eleven o’clock and the crowd in the amusement park increased and the pulse of Kabul became faster. We noticed people rushing to the exit gate of the park. Three men with Dastar, kohled eyes, and white uniforms entered the park. Two other soldiers with irregular faces accompanied them.

Some people tried to leave the park and stormed the park’s exit door, but the crowd inside the park was too large to disperse easily. Some families showed indifference to the presence of the Taliban in the park and had fun.

Morality police of the Taliban terrorist group with white uniforms expected that when they entered the amusement park, people might be afraid of them and behave themselves or leave the park. When they saw that they were very few in comparison to the crowd inside the park; They walked around with great indifference, like families.

Zahra Riahi (pseudonym) is a 26-year-old woman who left home for the first time with her four children after 7 months and came to an amusement park near her house. I asked her if she enjoyed her entertainment. She said; “Years ago, we were very happy on Nowruz. Although the whole of Kabul was insecure and suicide attacks were probable, we still had fun with our family. I did not want to leave the house this year, but we came here today because of my children who were imprisoned at home for seven months. I enjoy seeing the joy and excitement of my children, the weather is very good today and we had a good time until we saw the Taliban.” Zahra’s children were horrified to see Taliban fighters and begged her mother to return home. Zahra, while gathering her belongings, said: “They have become the enemy of our happiness and hope; Even children lose their composure when they see them. They ruined our entertainment.” Zahra and her children left the park.

When the Taliban fighters and the morality police of this terrorist group failed to stop a happy and excited crowd from laughing. They instructed the amusement park officials to separate men and women, but because the population was members of the family and it was not possible to separate men and women; They said that while having fun on the train, the scooters, and electric cars, women and men must be separated, and the park officials rode a group of women and then a group of men for fun on the ship and train. Nowruz’s days were spent in amusement parks and tourist attractions such as Paghman, Istalif, Shakardara, and other recreational areas until the Ministry of Propagation of Virtue and the Prevention of Vice set a different time for amusement parks for men and women. It is open to women for three days and the rest of the week for men.

After the days of Nowruz have passed on the twelfth day of Hamal, the day before the thirteenth day of Hamal or Sizdah Be_dar, the people went with their families to holy places such as the shrine associated with “Hazrat Ali”. On Friday, April 1, 2022, the shrine of Hazrat Ali in Karte Sakhi, Kabul, hosted happy families.

When restrictions were placed on men and women going to amusement parks, tourist attractions were the only place where families could go in groups. The thirteenth of Hamal or Sizdah Be_dar coincided with the first day of Ramadan in Afghanistan, so! People were having fun with their families on the twelfth of Hamal.

The Sakhi shrine was so crowded from the twelfth morning until the evening of that day. Families also came with baskets and pots of food and carpets to sit around the Sakhi shrine. What worried the people was the security of this place; Although the entrance gates, separate men and women but body search was not made at the beginning of the entry.

Marzieh Rezaei, a resident of Kabul who came to this place for fun and pilgrimage, was afraid of the large gathering of families in this place because about four or five years ago, a big explosion in this place killed and injured more than 100 civilians including women and children.

But Taliban morality police were still patrolling the area, although they could not prevent anyone from visiting due to large crowds, but their unusual presence upset families.

Marzieh Rezaei says: “Instead of persecuting and oppressing women because of their hijab, the Taliban should provide security.”

“Everywhere we go, the Taliban are wandering among the people, separating women from men, or telling any woman to wear the hijab.” While all the people enter through the gates without body search. We are afraid of insecurity in crowded places like here but the Taliban’s fighters are only seeking to repress women for wearing or not wearing the hijab, or to ask women if they came here alone or with a Mahram.”

However, with all the restrictions imposed by the Taliban, women took the time to have fun from Nowruz to Sizdah Be_dar but the morality police of the Taliban terrorist group were seeking women among the population to suppress them due to hijab or Mahram.