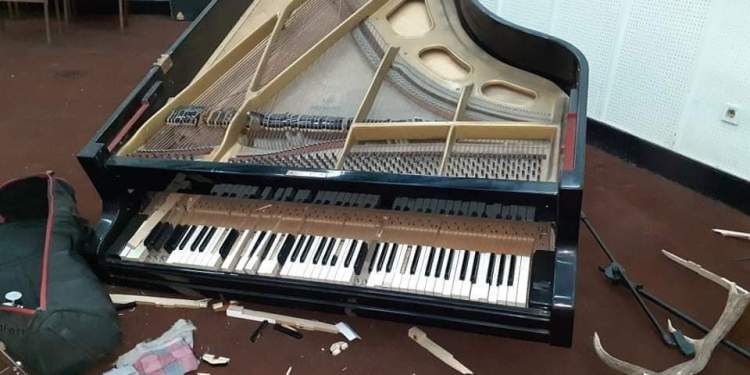 A land without song and music

“Music is like a country where the souls of the people move. There are beautiful flowers there and no weeds in it, but few people understand what passion is in each piece of music.” Beethoven

The Taliban group has a deep enmity with art, especially music, retaking the country after twenty years stopped the happy beating of the art heart. This enmity has increased to the Faculty of Fine Arts at Kabul University which has ordered the elimination of the music field. The professors of this department have left Afghanistan due to security threats or are not interested to continue teaching.

“We realized that the Taliban had not changed because they still believe listening to music is a sin and a violation of the law. So It is obvious that music instructors are not safe. Examples of mistreatment and murder of artists have been seen many times. With the rise of this group, we assumed that the work in this field was over and most of my colleagues left Afghanistan.” one of the department’s professors, who did not want to be named said. He continued while mentioning that the Taliban changed the name of the faculty to “song and melody”: “The Taliban want to recruit new instructors to teach students a new curriculum that is likely to be song and melody.”

With the fall of the republic to the Taliban, more than 200 public university professors have been expelled from Afghanistan, which is a major problem for educational institutions.

“With the restart of the university two students out of 18 appeared in the class, and most of our classmates dropped out because of an unknown future,” said Ahmad, a student at the department. He also mentioned the lack of professors in the music department and said: “There are less than five professors in this department who also teach sub-subjects such as culture and history, and the head of the department told us that it is no longer allowed to teach music practically.”

The Taliban have smashed all musical instruments and closed the gates of the department, where the fate of more than 40 students remains unclear. The Taliban have also appointed a new director for the National Institute of Music and renamed it ” Culture and singing”, and have also ordered the media to refrain from playing any music, which bans singing and listening to music. The Taliban had recently covered the “Mother Statue”, which was the joint work of female students for their undergraduate dissertations, with black patches and later broke it.

Fatemeh, one of the girls who worked on the statue, says: “At the time of the construction of this statue, the students of the Faculty of Sharia were prevented from doing so because the statue was female, and in the end they allowed it to be erected if it did not have a head. That’s why we made a jug of water instead of the head, on the neck of the statue. This group considers the construction of any statue as a symbol of polytheism and idolatry and calls it illegal.

The Department of Music was established for the first time in 1966 as a course alongside the fields of painting and sculpture at the Faculty of Arts of Kabul University, but after a short time, it was closed due to problems. This department started for the second time scientifically and academically in 1980 with the teaching of professors such as Professor Hafizullah Khayal and Professor Ismail Azami. Prominent professors of this department can be named: Professor Mohammad Hossein Sar ahang, Ms. Mumtaz, Professor Farahmand, and Professor Mohammad Akram Ruhnavaz.

At a time when only local music in Afghanistan had its listeners and there was no music for the young class, Zahir Hoveyda and Aziz Ashna were young artists who first founded an amateur pop group in 1964 with a group of artists. Agha Mohammad Kargar, Ahmad Shakir, Chatram Sani, Seyed Habib Alavi, Kabir Hoveyda, and Younes Musiqyar were among the other members of this group. The beginning of this group coincided with the steps taken by Ahmad Zahir in the field of music.

The first amateur band gained a lot of fame in the first two years of its existence and found its fans among the people of Afghanistan. Due to the warm reception of this group, the golden hours of Afghanistan Radio were allocated to this group from eight and a half to nine and a half after Pashto and Persian news, and after that, the next amateur groups such as Baran and Four Brothers were established.

The group worked for Afghanistan Radio under the observation of Professor Zaland, who played an important role in the Afghan music revolution. The songs of Bamyan, Ghazni, and Zohreh were among the songs composed by Master Zaland which had many fans.

With the rise of the Taliban in 1996, music once again declined and the gates of the music department at Kabul University and other schools remained closed for five years. People were not allowed to listen to any music. With the defeat of the Taliban in 2001, music revived. Now, two decades later, history is set to repeat itself and the sound of music in Afghanistan is about to be silenced. The Taliban are resisting all civilization aspects and trying to carry out their old and devastating attitude in Afghanistan.