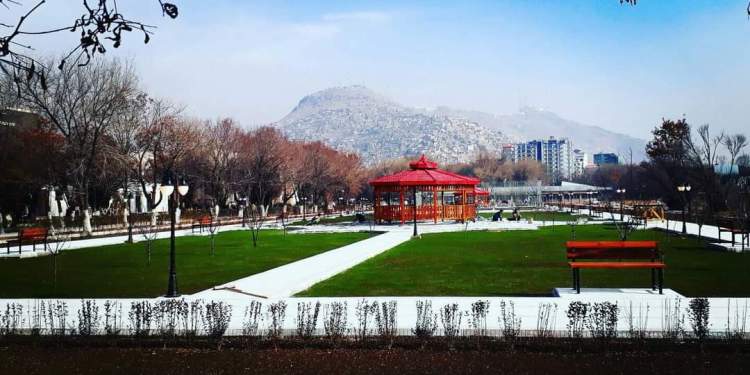 Taliban and gender obsession; No boy is allowed to enter the university in the morning

I wanted to go to Kabul University to do my bureaucracy. It was 9 a.m. when I arrived at the south gate of Kabul University. A bearded and messy man wearing a military uniform called me while I wanted to enter.” Do not you know entering boys in the morning is forbidden?” He asked. I said:” I’m not going to study, I have a bureaucrat process and I want to do it.” “Hey boy, you are not allowed to enter. Come back in the afternoon. You used to argue with previous corrupt security guards and they could not respond to you.” he said sharply. I could not remain silent, I said:” the law did not allow them to treat students badly and they were sophisticated, no one argued with them.” He came to me and hit me in the chest with the butt of his gun. I stepped back and he said: “We behave according to Islamic law, and whoever disobeys will be punished. Come back in the afternoon unless I will hit you.” I said:” You already hit me.” he punched me hard in the back and said:” Go, Hazara boy”

Inevitably, I went to Pole Sorkh, crossed the road, and looked back. He was still chasing me with angry looks and clenched lips, maybe he was wondering if he could shoot me or not !?

When I returned at one o’clock in the afternoon, I saw him, a little more tired than in the morning, sitting on a chair leaning against the wall because of a broken leg. When he saw me, he got up from the chair and said something to one of the armed men standing next to him, who seemed to be more lenient than himself, and motioned for me to go forward. “Islamic Emirate civilizes anyone who is rebellious like a domestic animal with the help of God.” He said with a humiliating tone.

After a body search, he tapped me on the right shoulder and said:” Go and get out of this gate when your work is over.” I did not say anything, I do not know why !? Maybe I was scared, or I thought something could not be said to this group. I entered Kabul University, and unlike in previous years, the atmosphere was dull. This can be seen in the faces of every single student, no girls on the campus, all boys moving in low-energy steps.

When I got to the Art Faculty, no one could be seen unlike a year ago. Last year, when we got reached the Faculty, we saw the smiling faces of fashionable students and the sound of laughter and music could be heard from the phones of boys and girls sitting on the grass. And the corridors did not seem to have seen for years the passing of a girl and a boy talking and laughing at the same time. The trees were more tired than before, and perhaps its branches did not have the patience of the birds sitting and chirping above a girl reading a book.

I saw middle-aged men working diligently on the lawns every morning, trimming the grass to get ready to sit, with dry lips and sweaty foreheads that were not even eager to see anyone, and tired of all the wood falling from the trees.

When I arrived at the Faculty of Sharia, unlike the rest of Kabul University, I was crossed out with a wave of bearded men with hats, who could hear the sound of a Hadith being read in Arabic and occasionally the sound of laughter accompanied by saying Alhamdulillah Alhamdulillah in front of the cafeteria.

I do not know where they got all this energy, maybe they get their energy from the silence and terror in the university. Or the more women are excluded from society, the more excited they become, and even now, with the simultaneous absence of girls and boys on campus, they are enjoying themselves. I thought to myself, is it possible to live without women and their laughter? Is it possible not to hear the voice of the girl you love and occasionally take her to a place like Kabul University? How can you enjoy life?

I do not know if those who are wearing white clothes with hats can think of a woman smiling or they can love a woman without tying her up? Nothing could be guessed and understood from under their beards and hats. Or maybe they were not born to accept such facts and their religion is nothing but a few Arabic words, loving and hearing a woman’s voice is denial other than their way that never disappears.

I made my way to the Faculty of Journalism, and all the memories of those good years came to my mind, one by one, thinking of all my classmates with whom I could laugh and have fun for years. To the beautiful girls of the college, each of whom could drive a boy crazy and make the boy come from the last grade of the class to prove himself, reach the first grade, and become a painter.

To my good friends, we would buy lunch in turn, sit on the grass, laugh as much as we could, and make plans for practical work.

When I arrived at the Faculty of Journalism, I saw nothing of that enthusiasm, as if no one knew each other and did not smile at each other. There was no mention of the good camera girls practicing photography, of those who made their subjects smile to take pictures.

I wanted to go to the college office to ask help for to solve my problem, but there was no one and everyone was busy defending their dissertations. I met two girls in the hallway, greeted them, and asked them how they got permission to enter in boys’ time. One of them replied with a smile and a sigh. ” I came to solve my dissertation problems and to get permission. I had to get permission from the students’ administration and to assure them that I was not going to the teacher’s office alonely, I also brought my friend with me. We have only been given an hour to be at the university and now we have to leave the university.”

I laughed, what kind of people did we finally meet that we had to ask their permission for anything, I wanted to talk more with those two students. When I wanted to go out with them, one of them said with a laugh, “Let’s not go together because we are not allowed, they will drop us out on the days when we graduate.”

I remembered the Taliban had said that no boys were allowed to walk inside the university with girls, that they had set up entrance and exit gates for boys and girls, and that the north gate was for girls and the south gate was for boys. I asked the two students about the direction to their house, and they said: “We are going to Barchi.” we agreed to see each other at the Dehbouri crossroads and go to Barchi together.

As I was walking towards the south gate of the university, I saw one of the professors of the Faculty of Journalism who, when I greeted him and asked how he was, said without answering: “Are you still here? why did not you go?” I said:” I would go if there was an opportunity.” When I took his hand, he squeezed my hand tightly and said: “We lost, but we are not going to give up .” I asked: “Why did not you go?” He said: “Where should I go, I am almost old.” He said goodbye and hurried to the college.

On the way out to the university gate, I thought, the gunman who behaved badly when I entered would say something now, and what would I say in response? When I reached the gate, he asked from a distance, “Is your problem solved?” I said nothing and walked slowly. It was clear that he wanted to harass me for praising the Republican police, and now that I did not answer, he became even angrier and said loudly behind me, “Well, we will show you who we are and who you are.”

I took quick steps to reach the Dehbouri crossroads and be on time for the appointment with the two female students. When I got there and waited in the corridor leading to Karte Sakhi Street, they also arrived. When we were about to cross the street and go to Golai Davakhana, the Taliban standing on the other side of the street noticed me waiting. One of them called me. When I went to him. He asked: “Do you know the girls?” I said: “They are my acquaintances.” He asked: “Are they, students? I said: “Yes.”

The Taliban called the two female students. They were scared. He asked them if they knew me, and they said we are acquaintances. The gunman said:” You should not go together.” I asked:” why?”

He said:” When female students leave the house, we must take care of them and now you do not have the right to go with them.” I said:” I am not going to bother them and we are going to go home together.” He asked me if I was fasting or not. I could not say no, I said:” Yes, I am fasting.” He said: “No non-mahram man or woman has the right to talk to each other during the holy month of Ramadan, because they are provoked.”

I said with a little smile:” I am not going to be provoked.” He asked rebelliously, “Are you human or not?” I said:” Yes.” He came one step closer and said: “Everyone is prone to error and may be provoked.”

I had nothing to say to him, after all with that amount of ignorance, one can say something to convince him. He forced me to take the road that leads to the Golai Davakhana and sent the two female students to the overpass and Kotesangi. I was exploding with anger and I could not do anything, how wild and stupid people can be that they can not recognize, walking and talking do not provoke anyone anywhere. Unless they have a sexual orientation like themselves.

Yes, Now Kabul and its university are controlled by people who understand nothing but the language of terror and war, who see women as a misleader to men. They think that if they are not kept under hijab and oppression, all the men of this land will go to hell, such funny and stupid ideas can only be found in the members of this group and religious extremism. You have to live here the way the Taliban want, otherwise, they will shoot you at your forehead.