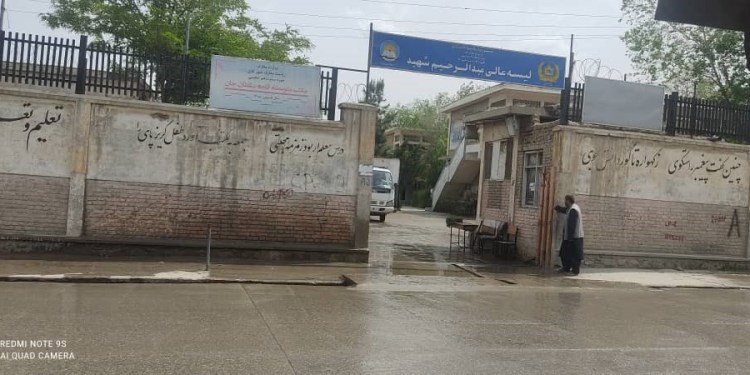 I went to the hills of Omid Sabz town, where many young people have been buried in graves in past years on the afternoon of the day of the explosion. When I got off the car, I saw different groups of people burying the corpses of today’s explosion. I also walked with tired legs to reach and see how a man and his hopes are buried simply by saying “Allah Akbar” and then explosion.

Near the cemetery where Hamidullah was to be buried, I met a middle-aged woman who was walking towards the crowd crying, as if she was carrying the grief of many years. Yes, that was true, I asked: ” Did you lose your relative due to today’s explosion?” she said while crying: ” No, my son, I live alone, the Taliban killed my husband on the way to Bamyan for riding the governmental employees 9 years ago. My son was killed in Dehmzang and I could only see his hand. Now I have come to scream at my son’s grave.” I could not talk more, I had to get to the funeral site sooner.

Tired people who could not cry and forcibly were digging in a grave. I asked someone who was the brother or father of the body, and someone showed me a man sitting on another grave and helplessly looking at his son’s corpse in front of him who was wrapped with a piece of white fabric. I sat next to him and greeted him. I said: ” I am sorry for your loss, I hope it may be your last sorrow”. His eyes went red. After a long silence, he said: “For more than forty years, we have been telling each other that this may be our last sorrow. But each time someone did not let it end. In the previous government, they also killed and said: it was done by terrorists, but now the terrorists themselves rule and kill us. I have no hope; I’m just waiting for another bomb to blast and kill me. He says of Hamidullah’s virtues that he was calmer among all his sons and always tried to achieve his goals. “Hamidullah was calmer and more subdued among my sons. I did not see him in the morning when he went to school, the last time I saw him was at the Iftar time last night.” Rahmatullah, father of Hamidullah, the victim of the explosion of Abdul Rahim Shahid school said.

He could not speak more so pointed to a young boy sitting near the corpse to talk to me. Hamidullah’s older brother; wiped away her tears and began in a tired voice, “Hamid… oh ‌ Hamidullah was hardworking and indefatigable. He asked me the time. It was exactly when he had to leave. He left home without saying goodbye, and this is the last thing I will remember from him for years and this will bother me for the rest of my life.” He believes that these attacks are done by the Taliban and says; When they praise the suicide bombers and consider them right, it is clear that it is their job and they want to kill people to intimidate them, but we do not stop and we continue.

Hamidullah was 18 years old and was in the twelfth grade of Abdul Rahim Shahid School, which was the last day that he saw Kabul with all its misfortunes and ended it.

A little further on, two other groups gathered on the hills to bury Milad Alizadeh and Parviz, two other victims of the incident, I went there; When I approached to talk to Milad’s father, he could not speak. His uncle, Gholam Mohammad Alizadeh, approached me to speak. ” Milad was 19 years old and the eldest son of his family, he was the most moral person in our family, his father is also disabled. Milad was also active in boxing in addition to his studies and preparation for the entrance exam. He won medals in domestic competitions. He worked in one of the carpet shops to provide living expenses. Milad was a very hardworking boy.” he can not stop crying, he points with his hand that it is enough.

I meet Milad and Parviz’s, classmates. “Yaser”, one of his classmates, takes out his mobile phone and shows me the last photos he took with Milad and Parviz. He was shocked and says with a bitter laugh:” He passed away, I saw him a few days ago. See Milad was killed too. I have not gone to school for a few days, if I would go, I may be buried now.”

He was in a bad mood and I did not want to bother him anymore.

While comforting Yaser, another classmate, Ali Sina, said: “I did not go to school today, but yesterday Milad came to our house with me and took my number. He said:” I will call you, I want to say something,” Ali Sina said.

I ask Ali Sina about Parviz. He said nothing at the first but then said with grief: ” He is dead now, Her father died last year, he wanted to hold an anniversary for his father, but now he went to his father.”

As I was about to descend the hills, five more bodies were taken to the cemetery within a few minutes.

Our life is a nightmare and that is all…!