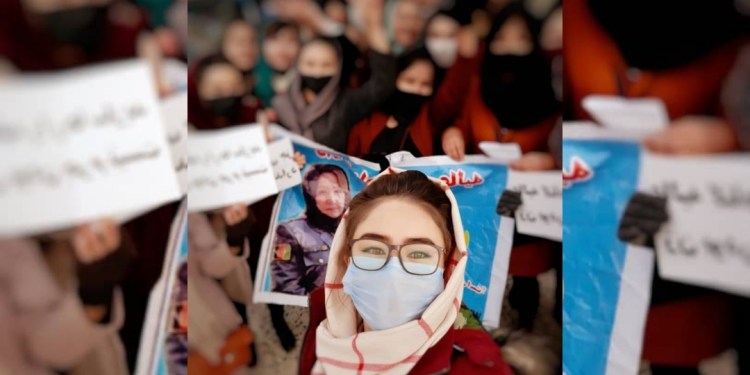 The path is rough and the future is uncertain; As Afghanistan plummeted into darkness, the future of this territory was shattered, and the Taliban presented new versions every day to limit people, especially women. The Taliban, like twenty years ago, are displaying their hated and misogynistic faces more and more every day, ignoring all the achievements of past years that themselves were an obstacle to them.

Shamail Naseri is a girl who was born 25 years ago in the foothills of Daikundi province during the first period of the black Taliban rule. By the time she reached school age, the Taliban had been severely defeated, and everyone thought that the group had been destroyed, only that their crimes would be badly remembered in history, and that’s all. One could not have imagined that this group, after twenty years, would regain power by killing innocent people and destroying the country’s infrastructure, and once again lead Afghanistan to destruction.

Shamail has finished school in the Miramur district of Daikundi province with all the problems that women faced in those days. She recalls the days when her family did not agree with her going to school. “In the early years, my father would not let me go to school and said that a girl should stay at home and learn house chores. But I was able to go to school with insistence, when I came home from school my mother would not allow me to review my lessons and forced me to help her with household chores. I used to take the sheep to pasture to get a chance to review my lessons. I had the opportunity to study when the sheep were grazing.” She attributed her family’s opposition to the intellectual legacy of the early Taliban regime, which also influenced her family.

She is now a graduate of the Faculty of Literature. Before the fall of Kabul, she was working for the Ministry of Mine while studying public administration at Dunya University. After the Taliban takeover, she and all Afghan women were barred from work and education by the Taliban. However, she did not give up and after the fall of Kabul, along with other female protesters, she launched the “Afghan Women’s Movement for Freedom and Justice”, which in the post-fall months defended the rights of her fellow human beings with the slogan “Food, Work, Freedom” took to the streets and fought.

This movement took to the streets and raised its voice as the Taliban ousted women. ” the Taliban first considered women as the weaker gender, thinking that women today, like twenty years ago, could be intimidated by bullets and silenced by whipping and torture.”

Although the Taliban imposed harsh conditions on women after taking power, on September 3, women protesters took to the streets to resist the group’s terror.

She talks about the days when Kabul was in fear and silence.” On the day of the fall of Kabul, I was sitting in my office, although the situation was not normal in the morning, and with the fall of Herat and Mazar, everyone was somehow scared, but I thought that the defense forces would be able to retake the big provinces. It was ten-thirty in the morning when one of my colleagues hurried into the office and asked the women to go home, when we asked more; he said the Taliban have entered Kabul. We hurried out. When we tried to get home, none of the drivers were willing to ride the women in the car, they were afraid that the Taliban would interrogate them as to why they had ridden the women without a mahram. ”

For women, a dark future was conceivable from the very first hours of the Taliban’s arrival in Kabul, and how this group hanged and stoned to death women twenty years ago under various pretexts reinforced this notion.

When I asked her why she did not leave Afghanistan, she said; In the first days, I tried to find a way out, mostly because of the pressure of my family, who were worried, but after a few days and thinking about the hardships I had endured over the years, I could not satisfy myself to leave.

At least I was not intended to leave the field without any struggle.

She and a group of civil society activists who were previously active in raising awareness and defending women’s rights and are now a member of the Afghan Women’s Movement for Freedom and Justice decided to speak out against the Taliban. “On September 3, when the Taliban first met us at the Faware Aab Crossroads, they did not know what to do. Some of them were angry because of our clothes and some of them had no understanding of the civil protests and were just watching. It was twelve o’clock when a group of Taliban, probably from the Haqqani branch, came and tried to frighten us with airstrikes. When it did not work, they sprayed pepper on us and threw tear gas at us, forcing us to come home that day.” she said of the first days of the fighting.

The protests of the women’s movement were widely reported in the media on the same day, and the Taliban feared that such demonstrations would continue, prompting the group to continue its violence against the media that came to cover it.

Several other protest groups have since formed in Kabul and other provinces, prompting the Taliban to fear for women’s power, whose arrest and torture, and forced confessions to indicate the Taliban’s fear and the growing power of women.

After her comrades were arrested and tortured, Shamail was forced to live in secrecy for some time. The Taliban sent her thread messages and went to her house to arrest her. “Every day they called me with different numbers, claiming they are reporters and asked me for an interview, then they asked my address. When their trick failed, they had gone to the house I used to live in several times and ordered my neighbors to inform them when I am back.

When the Taliban brutally thwarted all women’s protests, Shamail and her comrades continued to protest in homes far from the Taliban, capturing the voices and struggles of Afghan women by taking videos and photos and sending them to the media to make their voices heard. The Taliban thread women every day to silence and intimidate them as well as kill women under various pretexts across the country.

Shamail talks about continuing their protests and says; We have nothing to lose, they took away from us all the achievements we have made in these twenty years with countless sacrifices; What else to fear. We will never be silent, maybe they can take the street from us and even take our houses from us, But they can not take our pen. We write and protest as long as we want justice, freedom, and equality. The Taliban are more afraid of the voices of Afghan women than the sound of bullets being fired at them, closing schools to girls confirms my claim.