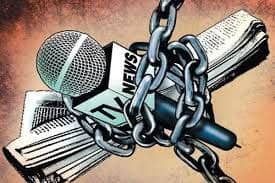 Freedom of the media is a basic precondition for freedom of thought and expression, as it is a guarantee of civil liberties and civil rights. Therefore, freedom of the media can be equated with freedom of conscience. The media is a tool for socializing human perspectives. This valuable tool is the basis of social awareness and harmonizes human society with the process of “change” and “development”. Hence, the media has received serious attention from political regimes, and governments have sought to control civil liberties.

The most important feature of media freedom is legal guarantees. If governments recognize media freedom in their constitutions, they will lay an important foundation for media freedom. The media is the most important platform for the government, civil society, and citizens, which is why the media is attacked from all sides and they are more vulnerable than any other social and national institution. The most common damage to media freedom is political interference with the legal values ​​of media freedom. In this case, the ruling political groups restrict media freedom through dominant policies or religious, ideological, ethnic, linguistic, and tribal pressures. In some cases, these pressures take on a tasteful aspect and result in countless victims. The biggest victims of these approaches are the free, professional, and non-governmental media.

Afghanistan is a country where religion and tradition have always created barriers for the media and cultural activities in general, and at different times, rulers have used these barriers to gain more control over the media.

Before the establishment of the Republic in Afghanistan, the media was a tool in the hands of the government for political purposes, and with the establishment of the Republic in 1973, the press gradually emerged from isolation, and several free and independent publications were launched, but After the coup d’état of May 7, free media disappeared again, and, within the political system, there was no such thing as media freedom.

After the establishment of the Republic in 2001, a new stage was set for the media. A new mass media law was passed, emphasizing and supporting the expansion of independent media activities and freedom of thought and expression. This has led to the emergence of hundreds of new media outlets in a country whose people have been deprived of the right to freedom of expression and thought for years. One of the greatest achievements of the Republican system in the last twenty years has been the multiplicity of media, the activity of free media, and, most importantly, the serious involvement of women in media activities. Although the media has faced many challenges over the years, it has suffered many casualties, including violence against journalists, limited access to information, and government censorship; However, the oversight of media protection institutions and the support of the international community led the free media to continue to operate and to put the situation in Afghanistan at the center of the global dialogue.

After the fall of the Republic, the media have been severely restricted. The control, censorship, and restrictions that now apply to the media not only do not provide an opportunity for free media activity, but also make the work of the media very risky and, as it turns out, the Taliban consider the control of the media as a way to consolidate its position in the world. So they have made restricting the media one of their policy priorities. In this regard, the group has recently drafted regulations for the media, which can be called the Taliban government’s publishing policy.

The bylaw states that the media should not publish material that is “non-Islamic,” insulting “national values,” or broadcasting material that has not been approved by Taliban officials. These commands are a tool that has challenged media activities; Because many articles and reports can easily be interpreted as anti-religious, anti-patriotic, or anti-Taliban.

The Taliban have mandated a media watchdog to censor and evaluate any media coverage. There have also been cases where journalists have been arbitrarily detained and forced to publish news approved by the Taliban.

Since the Taliban came to power, more than 100 media outlets in Afghanistan have been deactivated and most experienced journalists and reporters have been forced to leave the country. Their rise to power has affected the activities of more than 7,000 media workers. Many of these people have refused to continue working and have gone into hiding. New regulations have completely restricted media freedom in the country, and journalists and media activists have resorted to self-censorship for fear of arrest. Any critical reporting by reporters about the Taliban regime is severely suppressed.

The closure of radio, television, newspapers, and online media for various reasons in recent months has led to the collapse of the Afghan media community and the achievements of the past 20 years. Financial problems, security challenges, self-censorship, limited access to information, lack of women’s participation in the media, and so on, can isolate the Afghan people and mark another dark period in their history.