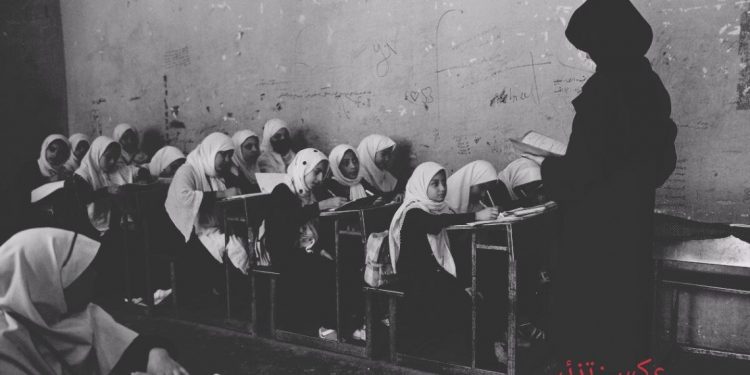 Ms. Zahra; A teacher who, after 13 years of teaching, works with a wheelbarrow

May 1st is International Workers’ Day, which equals one day before Eid al-Fitr in Afghanistan. I left the room this morning to see the atmosphere in the city before Eid. I walked from the sidewalk to Pole_Sukhta. The members of the Taliban, who have celebrated Eid one day before others at the behest of their leader, look a little cleaner than in the previous days, with long hair, white clothes, and long leggings. When I looked at them, as always, I was afraid of their whole being; From their white clothes and greeting the shopkeeper and even from their laughter. When I saw that they were not fasting and that they had celebrated Eid, I bought cigarettes more safely and without fear of being flogged for not fasting. I was giving the price of a cigarette to the shopkeeper when a woman having a wheelbarrow stood a little further from the shop door and asked the shopkeeper; If anyone came to buy and needed to transfer it with a wheelbarrow, let them know.

I left the shop and greeted her; At first, she did not want to talk and made herself busy so as not to bother her. I said: ” I want to write about her condition for a magazine.” She accepted and asked:” Are you a journalist?” I said:” If the Taliban asks this, I will say no.” “You have to take care of your life, do not give them an excuse that God can not help you,” she said with a laugh.

I said:” Did you not celebrate Eid?” She said: “The sadness of bread does not allow normal days to pass easily, the hungry are always hungry. There is no difference between Eid or normal days. Every day I can provide dinner is Eid for me.”

Her name is Zahra and she is 38 years old. Before the fall of Kabul, she was a teacher in one of the public schools for 13 years and taught the subject of “Dari”. During the first period of the Taliban rule, she studied up to the fourth grade in one of the home schools in Herat. Twenty-seven years ago, when the Taliban took over Herat, Zahra was dreaming about her future and wanted to become a poet and write poet of the girls of Herat who had never let their hair down in the wind. “We were a lot of girls, we were just believing that we could think about our dreams. Although we could hardly study in secret, we did. When the Taliban came, terror was everywhere, they killed many and no one dared to bury their bodies. Women in the courtyard could not speak loudly so that a non-mahram passer-by could hear their voices.” She narrated her memory.

Zahra’s family has been forced to flee to Iran due to unemployment and poverty. She tells about the good behavior of Iranians. Iranians provided food and house supplements. One of her neighbors found jobs for Zahra’s father and brother in a factory. Due to the good conditions of those days, Zahra and her sister can continue their studies and study until pre-university. Zahra says about being independent, even though her father supported her well; she has been trying to be independent since then.

Besides studying, I made mirror frames and provided for my expenses by selling them. I will never forget when the Taliban were overthrown. It was night when one of our neighbors who had a television informed us of the news and my mother gave her an embroidered handkerchief for her good news. None of us slept until morning. I was in the tenth grade in those days, the next night I took money from my father and brought sweets for my classmates. We cried for joy with one of my classmates from Bamyan. From that day on, I was counting the moments to return to Herat, and my heart beats for all the girls who used to gather together and study under the pretext of embroidering.”

Zahra’s father, with the bitter experience he had before the fall of the previous governments, thought that another civil war was imminent, so he waited for a few years and returned to Herat in 2005. Shortly afterward, Zahra married a boy she had met in Iran.

Two years after the marriage, she comes to Kabul with her husband and daughter to look for a better opportunity.

Zahra talks about those days in Kabul with a feeling as if she has lost something forever. ” when we came to Kabul, it was under reconstruction. We could feel the enthusiasm and hope even in ruined houses. I still made decorative items for a while, and my husband worked in photography, until one of my father’s friends, who was an employee of an institute, worked in the education department. He asked me to teach in a girls’ school. When I went to the Ministry of Education, they did my job very respectfully and well. During those years, I worked with all my being and asked my brother, who was in Iran, for textbooks. From the writing instruction to the storybooks and novels that were available in those days, I read them to my students at the end of the class and talked about them. ”

Zahra is the mother of three daughters. She has been separated from her husband for several years and has not been able to go to university due to life problems. Her daughters used to attend school until a few months ago. But now, they, like their mother, have not been allowed to go to school. A teacher working with a wheelbarrow, a woman who taught until yesterday that no other girl should work. Now she carries a storehouse of knowledge and experience that does not even cost a bread. She speaks of the books she has bought over the years and placed in her small library: “I love poetry, poems that speak, not poems that only have weight and rhyme. I read Forough’s poems to learn how to be myself, I read a lot from Dostoevsky and Ernest Hemingway, but I wish I could buy bread with them today. The energy I got from the Jojo Moyes books is no more. I donated my books to a library when the house-to-house search started, but the library manager later found out that my financial state was not good. He gave me some money for my books. I now suffer from the words I read in those books. When you read a book, you understand the meaning of life and then you have to live, not argue with people you can’t even talk to.”

I said: “Today is May 1st and International Workers’ Day. She laughs and says.” Honestly, we are all workers, we do not have a life and we work only to survive. We have to think about the bread we can buy with our wages before we think about the value of what we do. A group in the United States protested several years ago over working hours, but what about us? Working time does not matter, it’s just work that allows us to survive.”

She has repeatedly gone to the Taliban Ministry of Education and told them about the experience she has gained over the years, but the Taliban have told her: “Anyone who has taught girls immodesty and atheism for 13 years under the auspices of the infidel system cannot be a teacher in the Taliban regime. One of the Taliban administrative managers told Zahra; ” We are dealing with someone who is a Muslim and follows the sharia of Islam, not to come and talk about democracy and these things.”

Nevertheless, Zahra is still a teacher, a teacher who does not give up easily. She works with a wheelbarrow for providing dinner and in the afternoon teaches her daughters and her neighbors to write correctly and asks them to write diaries. She says of her students: “When I decided to work with them in this section, they were very happy. I do not know how long will the hardships last but I’m sure we will write a lot from this darkness for the future to read later and remember that we were Afghan women who became mothers and picked up our children’s dismembered bodies from school, protested, were stoned and lived in misery but we did not give up.”