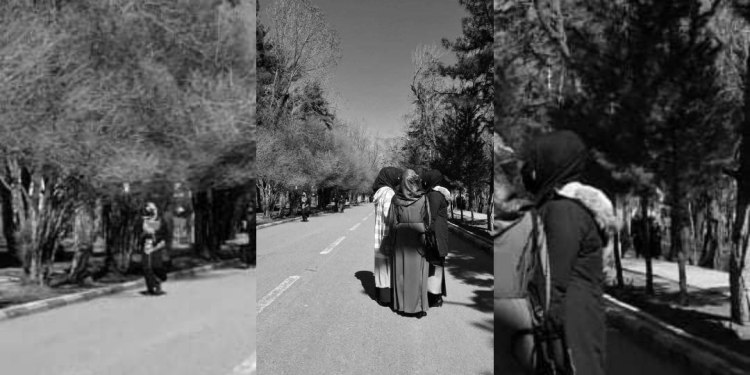 Universities began on the 26th of Feb, separating female and male classes, the observance of the Islamic hijab, and the prohibition of photographing and filming from the university courtyard. Female students usually wear long clothes so that their last hope, which is attending university, would not be taken away from them. On the third day of college, I wore a knee-length coat with jeans. I was stopped at the entrance of the university by a woman moral police who was in charge of inspecting female students and she did not allow me to enter. After some discussion, I was able to enter the university with a strong emphasis on wearing long clothes tomorrow.

I could not do anything, I decided to film myself and talk about what happened. I asked my classmates to videotape me while I wanted to talk about the problems we have been facing since the Taliban takeover; But my classmates were afraid and they were right because the Taliban do anything with the slogan of Islamic law, and in their opinion, they are right and no one has the right to object. My classmates said: “You are crazy. Leave us alone”

I could not cope with someone coming to command me, I talked to my classmates again and said: ” I wish we were protesting” they said you do not want to come to university, you want to fire us, one of the professors overheard us while we were talking but said nothing. At night she left me a message as to why I had said that today and invited my classmates to protest. I said: “Master, I was joking and I do not intend to do that.”

But my teacher emphasized again and said:” Please do not do anything that will both fire me and expel all your classmates from the university. Also, they will detain you to make you confess your regret.” I honestly do not know why my teacher said these things, whether it was out of pity or to scare me. Although I am aware of the tyranny at Kabul University, I still told my professor that I was not doing anything. Leaving aside the conversation between me and my teacher, we come to the fact that, like first graders, we study for three hours, during which only one female teacher teaches us. To escape such a boring atmosphere at the university, which was once a symbol of Afghanistan’s educated society, we have reduced the number of classes on weekends to other days of the week. On the other hand, we have to study, at least as a protest against the Taliban who wants to force girls to drop out of university by imposing these conditions. We will give a tooth-breaking answer that they will not succeed.

The night I talked to my teacher, I did not know we would not have a lesson tomorrow. The next day, when I went to university and saw that my classmates were not there, I saw the professor. She said that you are off today. I wanted to say goodbye to her, but she emphasized again and said:” Please go straight home from here.” Even though I had said I would not do anything, I was angry at her insistence and I thought she was scaring me. I said:” My professor, I am a student at this university and I understand what should I do or what should not do. I think you do not need to tell me where to go and what to do.” What you want to do is not in the best interest of you and your classmates, and it may cause you problems and deprive you of everything. Then who will help you?” She said.

Now our class schedule is set up like the previous semesters, with each subject having its own teacher; But in person, only one female professor and one male professor, who is about 50 years old, teach us. I once asked why the professors whose names are on the schedule do not come to class, they said that their names were written only because of the schedule there. For example, one of our professors, whose name is written on the class schedule and the chart of exam times, is currently in Pakistan.

Many of the experienced professors have left the country due to security problems. Now junior professors, who know nothing but violence and are waiting for the students to do the slightest thing they think is wrong, have a good opportunity so they can say what God wants them to do. In the class, the master is always careful not to act against the government or speak against the government or the Taliban.

We start each lesson by emphasizing that you should be careful about what you do, and we continue with a lot of emphases so that no one says anything against the Taliban. According to the schedule given to us, our exams were supposed to start on March 21, because in Talabani culture, there is no such thing as Nowruz and we do not have the right to celebrate.

The conditions for being allowed to take the exam were hung by the head of our department on the classroom wall, emphasizing several times that “hijab is mandatory and those who do not have an Islamic hijab are not allowed to enter the department and attend the exam session.”

I am a photography student at Kabul University. To be able to study this field professionally, I have to do practical work, but the Taliban have banned taking pictures at the university. This camera is like a grenade in someone’s hand who wants to attack a group with it in the Taliban’s view. Is it possible to live with this group and not say a word ?! I do not know if I will be able to continue in such a situation or not, But it is fighting that keeps me alive, and women must fight for their rights, and that is the only way.

I have often asked myself how it is possible to study at university when the killers of our brother, father, wife, mother, and hundreds of our loved ones are now its boss and security guards. But leaving university is to accept defeat, and I will never accept being defeated by this dark group with the white flag.