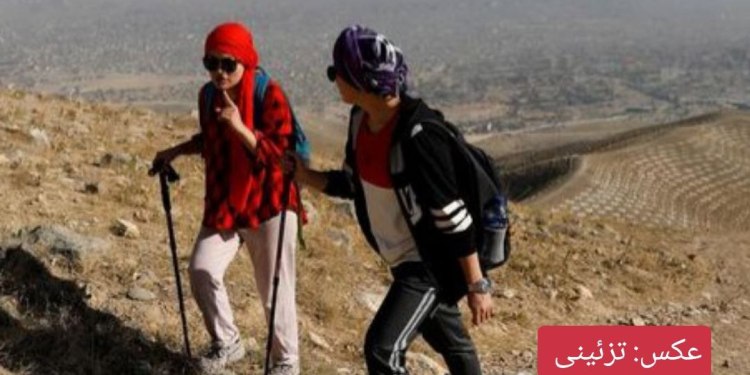 Before the fall of Kabul, when everything was fine and life was going on, we used to go for a walk with my mother and my cousins ​​every morning. In those days, when no woman forced herself to stay home for fear of being flogged when we were returning from a walk, we saw girls in regular clothes going to school.

As the fighting intensified in the northern provinces and the districts fell one after the other, we watched the news on TV every night. My mother narrated to us the stories of twenty years ago when the Taliban occupied the country then, restricted and repressed women. In the central provinces, the Taliban set fire to Hazara’s homes and forced them to leave their homes and lands.

But I was sure the Taliban could not occupy Kabul. Honestly, no one believed that Kabul would fall overnight with all its forces and facilities. When the war reached the city of Ghazni near Kabul, I became even more worried, because I was beginning to believe that sooner or later there would be a war in Kabul, and on the other hand, two of my uncles were members of the National Army and were fighting against the Taliban in Ghazni. My mother used to call her brother every day and my uncle said: “We won’t let the Taliban reach Kabul until we are alive.”

The next day, we learned that Ghazni had fallen. I called my uncles but they did not answer. It was past one p.m. when an acquaintance called and announced the death of one of my uncles. He had said that his body was left on the street and no one dared to pick it up because anyone who did so would be killed for being in contact with government forces. There was no news of my other uncle and no one knew if he was dead or alive, I had never seen my mother as frustrated and tired as she was that day.

It was late in the evening when the courtyard door was knocked. When we opened the door, we found my older uncle full of blood and the smell of gunpowder. Ghazni had fallen and my uncle was injured. A trailer driver had hidden him among his loads. My uncle had been shot in the right hand and had seen his brother die in front of his eyes. After all, the Taliban took over Kabul with the help of the Taliban inside the citadel, and I could not believe it.

After that, we fell into trouble and maybe we could not dare to go out for about two months. We could not imagine a morning walk. I was tired of all that uncertainty and fear and I had lost everything. I could not easily lose this small joy.

In my subconscious mind, I knew that if I go, my mother would have to come. Because she does not leave me alone. I abused her emotional weakness and said: “I will go if you want to come, if you are afraid you can not come.” I went alone for two days. There was no presence of the Taliban in the area, also, there was no presence of boys and girls exercising in the morning unlike past except for one or two boys, most people were seen going to work.

I was the only girl who went for a walk, ran for an hour in fear and homesickness, and came home again. In fact, it was the only thing that could keep me strong in all the growing fear.

My mother came on the third day, from then on we could not go every day, we did not want to draw attention so we went for walk three days a week.

On November 8, like the previous days, my mother and I left the house, we had run for maybe twenty minutes when we saw a Taliban ranger coming toward us. We were scared and running turned into walking, I told my mother: “If they ask, I say you have high blood pressure and you have to walk.”

When they approached us, there were three fighters in the car and two of them got down and said: “What are you doing for so long?” I was holding the water bottle tightly in my hand so they won’t notice the shaking of my hand. I said: “My mother has high blood pressure and she has to walk. We have to walk every morning.” He asked: “Who are you?”

My mother said: “Like everyone, we are ordinary people, I am a housewife, and my daughter is a school student who does not go to school now.” We were scared because I had talked about the women’s situation in the media. So I was afraid and I did not say anything for fear that they might have seen my picture and voice in the media.

They talked to each other in Pashto and then said: “You should come with us to the police station.” I said: “Why?” He said: “Do not worry. We ask some questions and bring you back here. I said: “My mother is alone, she can not go home alone.”

He said, “She won’t get lost.” They wanted to take me by force. My mother did not let and said, “Do not touch her.” My mother was defending me when one of them slapped her. When I looked, my mother’s face was red. I said involuntarily: “What did you do, son of a donkey?” The one who had slapped my mother approached me to hit me. I looked around, looking for a rock to defend myself, but there was nothing. My mother came forward again and tried to beg him to stop beating me.

They threatened that this would be the last time, you would argue with the Mojahedin and leave the house without a mahram. One of them said proudly, “We have control over everything. Be thankful that you are alive.” They let us go home, and I never even thought about walking again, and because of the slap that my mother received; I blame myself many times.

It’s been a few months since November 8th, and despite different events that had happened, I still remember the sound of the slap on my mother’s face by the Taliban.