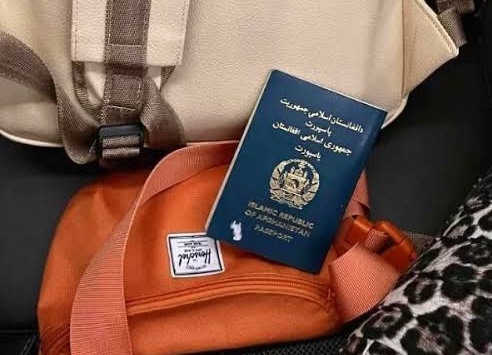 After the fall of the Republic to the Taliban, the entire political system failed to function normally. The General Directorate of Passports was one of these offices. People struggled to get their passports and get out of the war and despair inside Afghanistan, yet many could not get passports. But in the meantime, the market for intermediaries was getting busier and busier, and people had to pay a lot of money to get passports. The President of the Passport Office is a member of Haqani family and the Intermediaries are supported by him. A passport costs $1100 on each passport in the black market. “Ata” is the nickname of a person whose uncle’s family had paid $ 12,000 to get passports to leave Afghanistan.”My uncle’s family was accepted by Germany but they did not have passports. They tried different ways to get passports but they failed. Eventually, a friend found an intermediary in the Interior Office who could provide passports, he asked for $ 1,500 for each passport but after bargaining, he was convinced to get $ 1,100. He had taken half the money before going for biometrics. One day he announced that everyone had to go to the Passport Office for biometrics at midnight. After paying large sums of money to the Taliban, they were able to obtain passports and leave Afghanistan.” Ata said.

After the reopening of the office for registration, a large number of people tried to register to get passports. In the first days of the site reopening, it was difficult to “register” due to overcrowding. Those who had little time to wait and get a passport were forced to go to the black market again. But this time to the photo centers and online passport registration centers. Shamsiya, who herself could not access the site, was forced to refer to one of the photo centers of Pole_Sukhta. “The first day the site opened, I tried to register until evening, but I failed. We should have gotten our passports as soon as possible because we had an appointment at an embassy. That evening I had to leave the house with my brother and find someone who could register sooner and make an appointment. I went to a photo center that was written on the door their center “online registration of a passport at a reasonable price” when I asked if they were registering, they said: “We have no time at the moment and we are busy.” Shamsiya returns after checking several photo centers and asks them if possible to register her and her family, the photographer says: “to register that night, they have to pay more so that they can give someone else’s turn to Shamsiya. Those whose turns were that night had paid five thousand afghanis, and Shamsiya had to pay seven thousand for each person. That means more than the price of a five-year passport. ” At first I did not accept, when I went out I thought what should I do if it’s too late or the site is closed again for any reason? I came back and accepted. The next morning, I was told to take the rest of his money. When I gave him the money, he said, ‘your appointment is on May 1, I paid 35,000 afghanis to register my passport.

This was not the end of the story for Shamsiya, the law changes a few days before May 1, and people over the age of fourteen must get a ten-year passport. It means, she had to pay a couple of bucks that she had previously paid for the passport. The day when it is the turn of Shamsiya for biometrics coincidence the day when the Taliban ordered that women not have the right to wear colored and tight clothes.” We left home at five o’clock in the morning so that we can get the passport sooner. It was half-past eight when the gate opened and little by little the clients were entering. When it was my turn, they did not allow me to enter. Those who were after me, who were not Hazaras, were easily allowed to enter, and other Hazara women were allowed to enter with a slight grip on their hijab.”

Shamsiya was not allowed to enter because she was wearing a colored scarf and shoes, and was prevented from entering with insults and humiliation. “My scarf was blue and my shoes were pink. He wanted to humiliate me because many non-Hazara women even wore colorful clothes and went inside easily. When I insisted on entering, he said sarcastically; “I will not allow you to enter in this dress.”

Shamsiya was forced to return home and change her clothes. “When I returned to Passport Office, it was 11 a.m. my family members including my husband had already done their biometrics. I was forced to wait for my turn and my process was done till 3 p.m,” Shamsiya said.

When Shamsiya left the Passport Office, she was worried that the Taliban member who had bothered her would insult her again. “When we went out, she called my husband and said; “Your wife may embrace you one day, you should control her.”

When Shamsiya’s husband wants to defend his wife and asks: “What has my wife done and what is the difference between her clothes and other women’s?” Taliban members tell him violently and insultingly: “You are not jealous that your wife comes out in a dress that shows off her breasts and charms other men, and goes on to say, “Get lost, you are a prostitute family.”

Shamsiya’s husband wants to resist the Taliban, but one of the Taliban members forcibly takes his one-and-a-half-year-old child and beats him.

After a week, Shamsiya and other members of her family receive the passports from the post office, but the passport of her one-and-a-half-year-old daughter has not been printed yet. The five-year passport booklet has expired and will not be issued to persons under the age of fourteen for whom a five-year passport has been issued for an indefinite period. Despite all this consumption, she has not yet been able to obtain a passport for her entire family, and she may miss the opportunity to get out of Afghanistan’s precarious situation.

But the Taliban group continues to register under the age of fourteen for their income and receive their money despite the expiration of the five-year booklet and there is no passport for them.

By restricting legal conditions and procedures, the Taliban are forcing people to enter the black market, which is also controlled by the Taliban. In this way, they make a lot of money fearlessly.