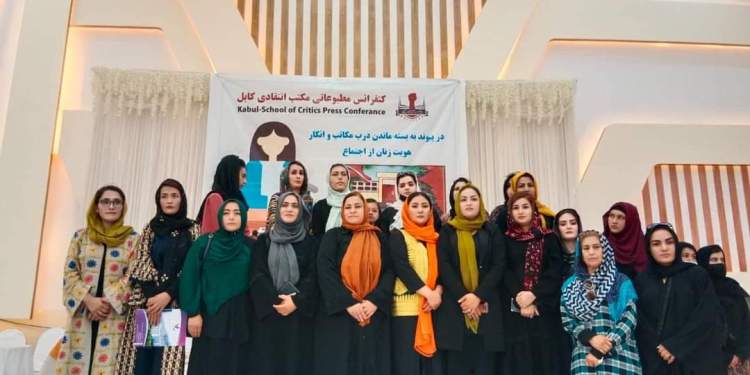 The Kabul_School Of Critics which is a Women’s Protest Movement against the Taliban criticized the silence of the international community regarding the violation of women’s rights by the Taliban.

This women’s movement held a press conference today (Sunday, 3 July) in Kabul city in connection with the closure of girls’ schools and the denial of women’s identity by the Taliban.

In this meeting, the founders of Kabul_School Of Critics condemned the Taliban’s dealings with women and the group’s abuse of women’s rights in political dealings with the world and accused the international community of being irresponsible towards the rights of Afghan women.

In the resolution of “Kabul_School Of Critics,” it is stated that “Women’s right to education is not a tool for political deals. The shameful silence of the world towards the women of Afghanistan makes it more bitter than ever that all human values ​​can be violated in political talks.

In the resolution of this women’s protest movement, it is emphasized that “Women’s right to education is not a business to make it possible for people to earn money from it. We stand against ignoring this right seriously and we will not allow women to become men’s first excuse for power-seeking crimes and enslavement of their sick egos.

Referring to the increase in poverty and unemployment and the brutal killing of people by the Taliban group, these women said that the Taliban will not be able to control the people by using force.

The resolution states: “Poverty, destruction, disease, and massacre cannot be an honor for those who seek power. Power arising from oppression has a dark and unfortunate end. We witness this misery every day, and you can not rule a hungry and suffered nation by hiding the truth.

The Kabul_School Of Critics emphasized the continuation of women’s struggle against the Taliban group and said that “Don’t hide the right to education, don’t make women a tool for the political privilege.”

This is while the Taliban have closed girls’ schools and more than a million girls above the age of twelve have been deprived of schooling, and the Taliban fighters have violently suppressed women’s civil protests for the right to education for girls in Kabul city and provinces of the country.

Human Rights Watch has repeatedly called for the adoption of a decisive practical policy toward the Taliban and called the international community’s soft policy in dealing with the Taliban group ineffective.