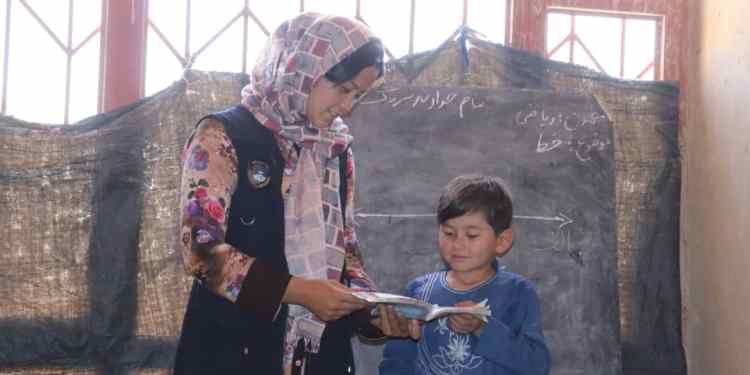 Female journalists have been forced to stay at home or look for hard work to provide living expenses after being fired If their jobs in the media field. Most of Daikundi’s local media are no longer active, and the only two private audio media that are active do not have any female reporters. In this situation “Ansiya Najafi” decided to teach voluntary twenty male and female students in the third grade of a school in Daikundi immigrant town after suffering a lot of joblessness.

Before the fall of the Republic, Ansiya Najafi had worked as a reporter in Daikundi radio and the Department of Information and Culture of this province, and recently she was a contract employee of Daikundi National Radio and Television, who lost her job after the Taliban takeover.

In an interview with Nimrokh, she says: she prefers voluntary teaching to the suffering of unemployment and staying at home. Before teaching at school, she used to spend her free days reading books.

“Derakhshan” elementary school is located in Nili city, the center of Daikundi province, and it was recently established for the students of the immigrant town, before the political transformation, it faced challenges such as lack of building, lack of teachers and teaching materials, but after these changes, The school is still without classes and teachers. At the beginning of the new academic year, when male and female students came to this school, the third grade of this school was supposed to be closed due to the lack of a teacher, but Ansiya Najafi, who lives near this school, volunteered to teach them. She says: “These days, when I saw all the efforts of the people of Daikundi to make their children literate and I remembered their deprivation of education; I decided to teach them. In the past twenty years, the only achievement of us Hazara people was education. But we cannot lose it in the blink of an eye. I wanted to support them to pass these difficult days. Actually, it is the only thing I can do.”

Ansiya Najafi says: “The principal of this school and other teachers welcomed her and the residents of the immigrant town agreed to pay her a salary, but she did not accept the salary due to the unfavorable economic conditions of the residents of this town.

“I have a student in my class whose family can’t afford to buy him a pair of shoes. They are two brothers and both brothers wear the same shoes in turn and come to school. When the first one returns home, the second brother wears his shoes and comes to school; considering such conditions, I could not accept the salary that their families pay.”

Ansiya Najafi says: “Now that their four-and-a-half-month exams have started, she is very happy that these students, especially girls, are not deprived of their studies, and she hopes to teach them this year until the end of the academic year.

Referring to the difficult experiences of people reading letters in the past, she says: ” She still remembers that when she was a child, she received a letter from her relatives from Iran to several neighboring houses in the village to read it, but no one was literate and the letter remained in the house for a long time. So that someone can be found and read it for her family.

She believes: “Now this achievement of the Hazara people that there are at least two or three educated young people in every house should not be wasted.”

The residents of the immigrant town in the center of Daikundi are those who have returned from Iran or Pakistan or have sought refuge there from distant villages due to war and drought, and live in difficult economic conditions and unemployment, and their children are deprived of access to education.

Ansiya Najafi teaches about twenty male and female students in the third grade of Derakhshan Elementary School, which is located in this town. Ainullah Heydari, the manager of Derakhshan Elementary School, affirming the challenges in this school, says: “Their efforts to equip this school by the Department of Education of this province failed. He says: “This school has about 160 male and female students and they usually study in a tent without educational facilities.