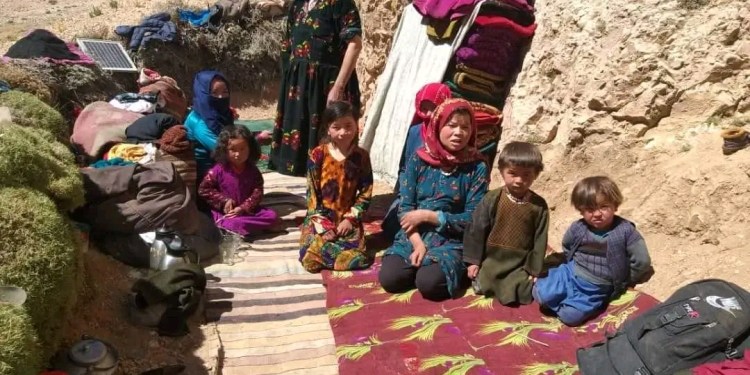 After increasing tensions between the Taliban and Mawlavi Mahdi, one of the Hazara commanders of this group, many civilians were brutally slaughtered by the Taliban in the Balkhab district of Sar_e_Pol province. Therefore, at least the residents of 10 villages from Balkhab left their homes and sheltered in the mountains of Balkhab due to the fear of being attacked and killed by the Taliban. Then they reached the neighboring provinces, some of these families went to Mazar-e Sharif, Samangan, and Bamiyan but unfortunately, a large number of women and children died of hunger and cold on the way.

No journalist has received the right to prepare a report and permission to go to Balkhab, and human rights organizations were not allowed to observe the situation due to the opposition of the Taliban. Only the families who reached Bamyan, Mazar-e-Sharif, and Samangan talked about their situation with the local people and local journalists, and in some cases, the refugees filmed how they escaped from Balkhab. In the videotape obtained by Nimrokh, it shows a large group of women accompanied by a small number of men, are moving up a rocky and difficult hill with their animals to a safe place.

One of these women says: “We are walking without any purpose, we do not know where to go, our children are hungry, none of us have brought food or warm clothes, we are just escaping to survive, but we don’t know how long we will survive?” Another woman who reached the Yakawlang district of Bamyan with her four children says: “It took seven days and nights to reach Bamyan. “We were walking through mountains and valleys for seven days and nights; None of us ate, when the children asked for food I gave them soil, some of them ate soil and those who were older did not eat soil. My children arrived safely, but many children in our group perished from hunger, we buried them there and came.” She says about her husband: “I do not know whether he is alive or dead. He may be imprisoned by the Taliban and may have been killed.”

The Taliban in the Balkhab district of Sar_e_Pol do not even allow the people to bury the bodies of the victims. Ahmadi Bolandi wrote in a message: “A woman with her two daughters took refuge in a neighborhood next to her village, but because she was from the village of Mawlavi Mahdi, no one gave her shelter and she and her daughters were displaced to the mountains; But seven days later, their bodies were found by local shepherds. When the Taliban found out, they did not allow them to be buried and said: “Let the wolves eat their bodies. “

According to Bolandi: “After negotiations of local elders with the Taliban, the body of this woman and her daughters were buried in the mountains because the Taliban did not allow them to be buried in the cemetery. The displaced women of Balkhab are afraid to return to their homes. They say that their men have been slaughtered and the Taliban will not spare their women and children.

A young girl in Takhar committed suicide before her wedding

No organization has yet helped the displaced people of Balkhab. So, a large number of women and children have perished while fleeing in the mountains. But the intelligence of the Taliban pursues and persecutes the refugees of Balkhab in Bamyan.

In the evening (Thursday, 7 July), the Taliban detained the men of four families of Balkhab refugees from Yakawlang district of Bamyan on the charge of cooperation with Mawlavi Mahdi.