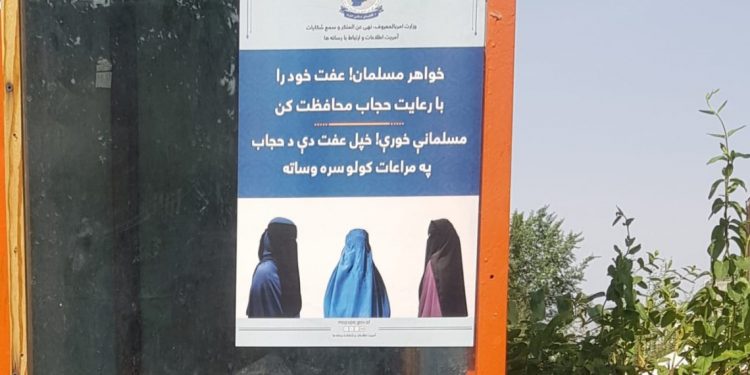 After the collapse of the Republic system and the spread of abject poverty in Afghanistan,      although this year most people do not want to celebrate Eid Al_adha and have fun; Some families who had gone out of their homes to enjoy and celebrate Eid in the past two days were beaten by the guidance police of the Taliban due to their clothing and not being accompanied with Mahram. Morality police have whipped girls for their clothing and men for taking out their wives.

Mastoureh Samimi (pseudonym), in an interview with Nimrokh, says that on Saturday, 9 July (the first day of Eid), when she went with her friends to one of the amusement parks in the west of Kabul for fun, the Taliban morality police whipped them due to their clothing and then thrown them out of the park.

“Yesterday, I and three friends of mine, who were all girls, went to the family park in Omid Sabz town for fun; It was around 2 p.m. when the morality police of the Taliban arrived and dispersed among the people. Men were separated from women and children and taken to another place; After a few minutes of advice, the men returned and went to the restaurant inside the park with their wives, but they also questioned the women and girls who were there without a mahram. They asked us: “Where is your Mahram?” When we said that four of us came alone, they started cursing. I wanted to convince them that we don’t need a man to get out of the house, but without listening to my words, they whipped me and threw us out of the park.”

Taliban have also installed banners and posters of hijab, burqa, and black niqab inside all amusement parks in Kabul. Along with women, the men of the families were also beaten while having fun in the parks of Kabul. A video was sent to Nimrokh media! It shows a man with his hands tied being tortured by the Taliban in front of his wife and mother. The sender of the video says: “This event took place yesterday evening (Sunday, 10 July) at Chehelsotun amusement park. He says: “Although the reason for this young man’s torture is unknown, he is probably whipped for having fun with his family outside.

“Yesterday evening, we witnessed a man being flogged in Kabul’s Chehelsotun garden, morality police tortured a man in front of his mother and wife. Although his mother was unconscious, the Taliban still tortured him. It is probably because of going out and having fun outside the house.” The Taliban had said in the last decree regarding the mandatory hijab for women that if they see a woman without a hijab (burqa and black niqab) in the city, her family will be punished and imprisoned.

While the families gathered in Kabul’s amusement parks, the morality police of the Taliban separated the recreational areas of men and women. In some amusement parks, the place of family recreation and young boys have also been separated from each other. However, the Taliban guidance police monitor the activities of families and women in the amusement parks every day with guns, and in some cases, they cause harassment and disturbance in people’s entertainment by criticizing their clothing and questioning their mahrams.