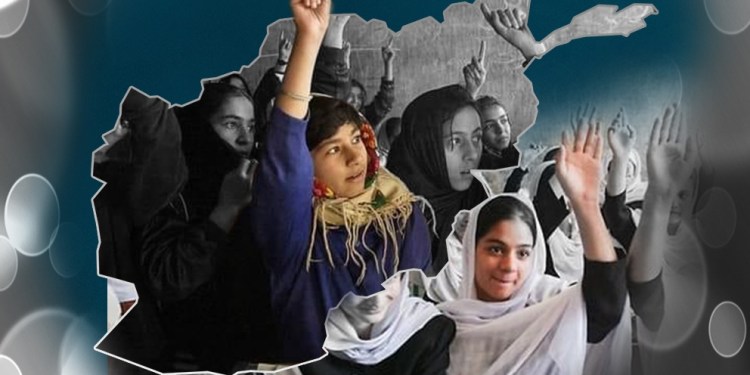 The petition campaign for the reopening of girls’ schools has become more widespread on social networks during the last week, and citizens warn of the unfortunate consequences of women remaining illiterate.

During the last week, especially during the days of Eid al-Adha, hundreds of thousands of users on social networks Twitter, Facebook, and Instagram expressed their opinion about the right to education of girls in Afghanistan and asked the Taliban group to open girls’ schools.

This campaign is carried out in three languages: English, Farsi, and Pashto.

Users from different countries have come together to sue for the right to education of Afghan girls.

Shamail Tawana, one of the women’s rights activists in Kabul, published a message on Facebook and asked her audience to accompany women in this campaign so that this process of litigation may affect political decisions.

She added that “Join us in this campaign. Our unity and solidarity is a sign of our strength and ability.”

Ms. Tawana asked the Taliban group who closed the school gates to girls above the sixth grade, “Why women are allowed to beg but are not allowed to go to school?”

Yalda Hakim, a BBC reporter, is one of the activists of this campaign, who during the last 300 days has written at least one petition message every day based on the reopening of girls’ schools. She wrote on her Twitter: “297 days have passed since the Taliban [officially] banned teenage girls from school. Millions of Afghan girls have been forced to think about life without formal education and are looking for alternative ways to learn. Let Afghan girls learn.”

Another user named Omar Gul Omar wrote on Twitter, referring to the harmful consequences of closing girls’ schools: “Allow girls to be educated, otherwise the line of beggars will expand!”

Saeeda also wrote on Twitter about the fear of destroying her dreams and the increase in begging among illiterate women and added that “I don’t like begging, my dream is to become a teacher!”

Some users on Twitter tried to refer to the history of Islam and defend the right of girls to education and also tell the Taliban group that their treatment of women has no religious justification.

Rahmat is a young man from Afghanistan who wrote on his Twitter account: “A girl cannot learn the business without going to school.” Umm al-Mu’minin Khadijah, the wife of the Prophet of Islam, was a businesswoman.

Shakiba Yawari, criticizing the unemployment and the increase in poverty due to the wrong policy of the Taliban towards women, wrote that “Why should women sell, but cannot go to school?”

Zubaidah Akbar, a women’s rights activist, is also one of the campaigners for the right to education for girls.

Mrs. Akbar wrote: “We celebrate Eid when our land is liberated and our girls return to school. Girls have been deprived of school for 295 days. “This procedure is not found anywhere in the world.”

Shaharzad Akbar, the former head of the Afghanistan Independent Human Rights Commission, is also one of the pioneers of the lawsuit for girls’ right to education.

According to her, with the gender apartheid that the Taliban has launched in Afghanistan, there is no Eid and no excuse for happiness.

Mrs. Akbar wrote on her Twitter: “Eid? The day when all girls in Afghanistan can go to school and all women can work in all fields, we will have an excuse to celebrate. “With the gender apartheid and widespread discrimination of the Taliban, many people do not have Eid in our land.”

This is while the Taliban group took control of Kabul about eleven months ago on August 15, 2021, and after a few days issued their first political decree about the cancellation of women’s right to work and education.

Despite the petitions and widespread street protests of people, especially women, and the emphasis of the international community, the Taliban group has not yet allowed girls above the sixth grade to go to school. The international community has repeatedly warned about the effect of women’s unemployment on increasing poverty and hunger in Afghanistan, but the Taliban group is not willing to allow women to work and study freely outside the home.

But, women’s civil protests and lawsuit campaigns on social networks for the reopening of girls’ schools are continuously active, and citizens share their messages, opinions, and criticism with each other with special hashtags.