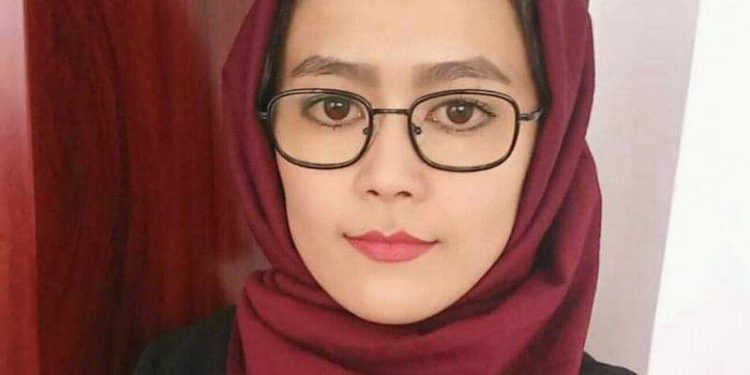 Her messy hair looked like it had been cut. She was injured under one eye. Maybe it was blind. It must have been hit hard. Her ears seemed cut, but they were ok; Only the hole in her earrings was torn as if someone had pulled it by force. One of her teeth was missing. With her dry and pained face, she looked like an eighty_year_old lady but she told me she was forty.

Pain and suffering had made her weak and thin. When I noticed her hands, I saw that she had painted with a pen, she acted unusually and looked like a crazy person, but she wasn’t. She wore many rosary beads around her neck and the worn-out stoles in her hands also attracted me sometimes. There were some worn-out pieces and pale and old blankets and pillows next to her. I thought her house was here.

As I was passing by her, I put some coins in front of her, but her face did not spare my curiosity and I had to sit in front of her. Although I was scared. I offered the ice cream in my hand, she returned it with her hand. She was not crazy. I chatted with her more easily and asked questions, but no sound came out of her throat and she had to answer me by pointing her hands. I could hardly understand what she was saying with the gestures of her thin hands and the weak voice of her throat. The veins under her throat and on the back of her burst hands were large. She was sick and it was clear that she was struggling with pain. In a moment, I felt my whole body in pain, my heart was burning as if I had been seen as a disheveled lady in agony. When I looked at her red eyes, I thought they were bleeding.

I felt oppressed. I couldn’t do anything for her, I couldn’t even buy a ten afghanis tablet. It was Friday and the pharmacies were closed. I was staring at her eyes, head, and face. My throat was tight.

I asked her why did you fall into trouble. Her answer was difficult to say, I didn’t get the answer to my question with her pointing and weak voice. I asked again, where is your house? where do you sleep at night? She pointed to her blanket and pillow.

Sometimes she would ask a few questions and I would answer them. We were comfortable together, sometimes a bitter smile appeared on her rotten lips.

Meanwhile, a man with his children passed by and stood far away, looking at both of us. When the poor lady realized that they were looking at us, she quickly turned her face away and asked me to tell them to leave. She feared and hated men. I became more curious and looked at the wounds around her eyes and the cuts on her ears. I understood why she hates men.

Yes! This was what happened on the corner of Kabul street. Oh, how painful it was. In a society where humanity is dead and such a cruel woman took shelter on the street. I was talking to that lady when some children around seven or eight years old passed by us. They looked at that woman and said: “Bitch”

Stunned, I put my hand in front of my mouth. The poor lady looked at them normally, as if she got used to these words. But I was burning. It was hard to digest this word. What can be expected in a society where a woman like her is called “Bitch” by a child to an old man? They convey so much pain and misery to women with their looks.

Here, in my land, young and old women are not safe. With hurtful looks, nasty words, and street harassment, women of this land are buried alive every day. I looked at my watch. I had to go but I stopped. The lady shakes her weak hands toward me. I also squeezed her hands kindly and with a bitter and painful smile on her lips, she left my hand and I said goodbye to her.