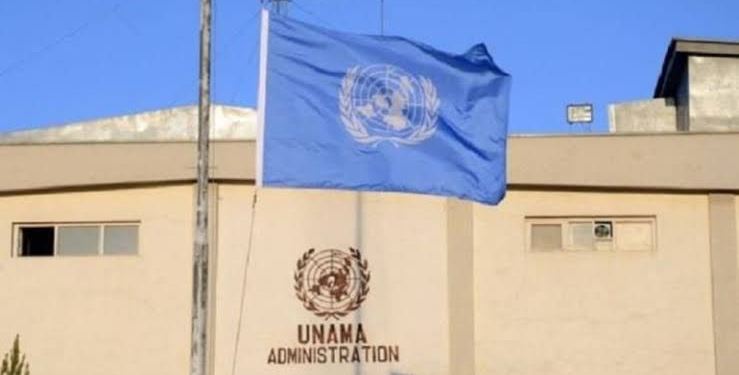 The United Nations has released shocking details of the Taliban rule in the annual report of the review of the human rights situation in Afghanistan.

This report summarizes UNAMA’s findings regarding the protection of civilians, extrajudicial killings, torture and ill-treatment, arbitrary arrests and detentions, the rights of women and girls in Afghanistan, and fundamental freedoms and conditions in detention places.

The UNAMA report states that despite the overall and significant decrease in armed violence, between mid-August 2021 and mid-June 2022, UNAMA recorded 2,106 civilian casualties, including 700 dead and 1,406 wounded.

According to the report, The majority of civilian casualties were attributed to targeted attacks by the armed group self-identified “Islamic State in Iraq and the Levant – Khorasan Province” against ethnic and religious minority communities in places where they go to school, worship, and go about their daily lives.

Meanwhile, Markus Potzel, Acting Secretary_General’s Special Representative for Afghanistan, said: “After August 15 (the Taliban came to power), women and girls are deprived of the full enjoyment of their human rights.”

UNAMA has stated that despite amnesty by the Taliban and a pledge to respect women’s rights, this group is “responsible for a wide range of human rights violations.”

The UNAMA has emphasized in this report: “The erosion of women’s rights has been one of the most notable aspects of the de facto administration to date.

The UNAMA report confirms that “since August 15, women and girls have been progressively denied, and in many cases completely denied, their rights to participate fully in education, the workplace and other aspects of public and daily life.”

Also, UNAMA has said that with the dissolution of dedicated reporting pathways, justice mechanisms and shelters, women victims of violence have been denied access to justice.

In the UNAMA report, numerous cases of human rights violations by the Taliban have been mentioned.

According to this report, the Taliban have killed 160 former members of the security forces and government institutions after announcing the amnesty.

UNAMA asked the Taliban to stop the killing of former government employees and bring the perpetrators of these cases to justice.

However, UNAMA’s main concern is the activities of the Ministry of Propagation of Virtue and Prevention of Vice and the General Directorate of Intelligence.

According to the UNAMA report, the Ministry of Propagation of Virtue and Prevention of Vice restricts the human rights and freedoms of Afghan citizens, especially women and girls.

Apparently, the instructions of this department are advisory in nature, but they take a harsh stance in their implementation and punish those who do not follow them (beating and torture).

With regards to places of detention: encouragingly, the de facto authorities do appear to be seeking to fulfill their obligations regarding the treatment of detainees, with the Taliban leader has issued guidance on this issue in January 2022.

Progress is hindered by financial constraints, resulting at times, in inadequate food, medical care, and hygiene supplies for detainees and the cessation of vocational education and training programs for prisoners that were previously funded by the international community.

At least 59% of the population is now in need of humanitarian assistance – an increase of 6 million people compared with the beginning of 2021. UNAMA’s report calls on the international community to continue its support for the people of Afghanistan by ensuring that urgent humanitarian and basic needs are met.

The United Nations Secretary_General’s Special Representative for Afghanistan has asked the Taliban to commit to respecting the human rights of citizens, as Afghanistan remains a member of some documents related to human rights and fundamental freedoms.

Over the reporting period, UNAMA documented:

2. 160 extrajudicial killings, 178 arbitrary arrests, and detentions, 23 instances of incommunicado detention, and 56 instances of torture and ill-treatment of former ANDSF and government officials carried out by the de facto authorities.

3. 59 extrajudicial killings, 22 arbitrary arrests and detentions, and 7 incidents of torture and ill-treatment by the de facto authorities of individuals accused of affiliation with self-identified “Islamic State in Iraq and the Levant – Khorasan Province”.

4. 18 extrajudicial killings, 54 instances of torture and ill-treatment and 113 instances of arbitrary arrest and detention, and 23 cases of incommunicado detention of individuals accused of affiliation with the self-identified “National Resistance Front”.

5. 217 instances of cruel, inhuman, and degrading punishments carried out by the de facto authorities since 15 August 2021.

7. Human rights violations affecting 173 journalists and media workers, 163 of which were attributed to the de facto authorities. Among these were 122 instances of arbitrary arrest and detention, 58 instances of ill-treatment, 33 instances of threats and intimidation, and 12 instances of incommunicado detention.[1] Six journalists were also killed during the period (five by self-identified Islamic State in Iraq and the Levant – Khorasan Province, one by unknown perpetrators).

8. Human rights violations affecting 65 human rights defenders, 64 of which were attributed to the de facto authorities. Among these were 47 arbitrary arrests, 17 cases of incommunicado detention, 10 cases of ill-treatment, and 17 cases of threats and intimidation.