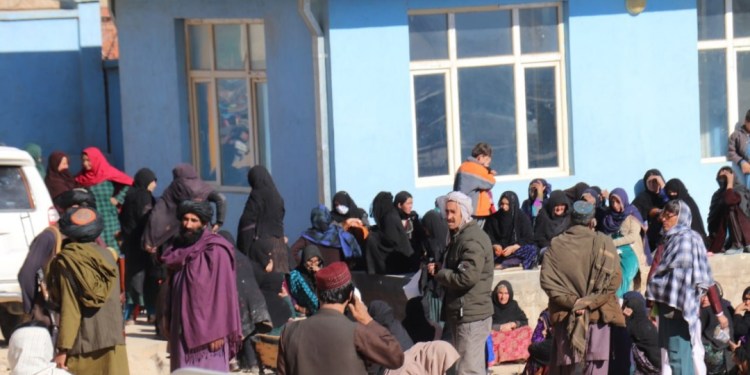 A local source told Nimrokh that Taliban fighters identify the houses of needy and widows while surveying houses to find needy people and later bother them.

This source, who was an eyewitness said: “The Taliban fighter said a woman, we will add you to the aid list if you give us two hundred dollars, that poor and needy family accepted because of their needs and have no choice. The Taliban wrote their names on the list and took their ID card copy and left.”

According to this source, armed fighters of the Taliban go to the villages with the employees of relief organizations to survey the needy people and interfere in the identification of the beneficiaries by the organizations.

Some needy and poor women who are the head of the family told Nimrokh that they were harassed by the employees of an aid organization who are members of the Taliban and they were asked to have sex in exchange for their help.

Sara (pseudonym), one of these women, says: “One day, a few people went door-to-door looking for needy people and surveyed the houses; When they were surveying our house, they took my phone number and said: ” Come and get help whenever we call. At around nine o’clock that night, I received a call from an unknown number. When I answered, it was an unknown man. He told me to prepare my house for them. (an indirect reference to having sex) and then we will include you in the list of aids.

Sara says: “After hearing this, I was very scared and hung up the phone, then immediately called my neighbor and said that someone was threatening me.”

The neighbor man and his wife used to go to Sara’s house at night to protect her and her children.

Sara, who is one of the displaced people of Eshterli district in Nili city, has no place to stay in Eshterli due to the land dispute and has taken refuge in Nili city with her four children and is in a difficult economic situation.

She says that she does not dare to go to relief agencies for help anymore.

Meanwhile, another needy woman also told Nimrokh that after her house was surveyed by a team that included Taliban members, she was “harassed” through phone calls, and “unknown people who usually speak Pashto.” are asking her to be “friends” with them.

This woman said: “Since they took my phone number for help, they are always bothering me. They say: “We will write your name on the aid list if you accept our friendship.”

This is while after the Taliban group’s occupation, humanitarian aid in Daikundi province is distributed unfairly and mostly among the Taliban fighters.

“Taliban fighters come to Nili city from Helmand province, Uruzgan province, and Pato district of Daikundi to receive aid. They return to their homes after spending three or four days in expensive hotels and receiving humanitarian aid.” A civil activist told Nimrokh.

He added that relief organizations should distribute aid packages to the needy with the help of the people themselves, and international organizations active in Afghanistan should seriously monitor the process of distributing humanitarian aid, otherwise the aid will be wasted and any abuse of this opportunity by the Taliban fighters will be obvious.

In addition to the poverty caused by the drought, the residents of Daikundi province also suffer from hunger and rising food prices. But the humanitarian aid is distributed among the Taliban and the needy women and families prefer to stay hungry due to the abuse of the Taliban fighters.