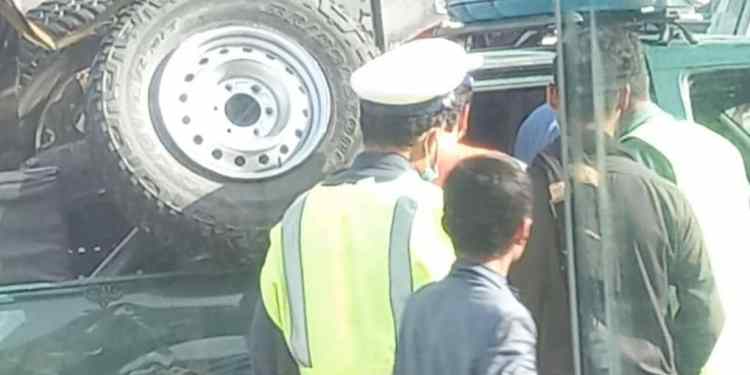 Taliban fighters kidnapped a young girl from Shahid Mazari road in the west of Kabul in front of people.

Yesterday (Monday, 25 July ) at 4:30 p.m. after saying goodbye to my colleague, I boarded a van to Dashte Barchi, the weather was hot and the traffic was heavy. We passed “Shahid Mazari Intersection” and the driver stopped in the station to ride more passengers. Suddenly we noticed a conflict next to the van.

A Taliban Ranger was standing a few steps away from the van, and next to it, three women were fighting. Two women in long black dresses and a girl in a white shirt whose scarf had fallen to the ground during the fight. The passengers of the van were all chattering about what caused the three women to fight in front of the Taliban, but the matter was different; Two women in black with colored scarves were trying to force the girl in a white dress to sit inside the Taliban Ranger.

Two women in black dresses were pulling her long, blond hair brutally. Then one of the Taliban fighters, while standing behind the Ranger with his hand on the trigger of the gun, threatened the girl with death and said: “Should I shoot you a bullet or two?”

That girl still resisted, she didn’t want to ride the Taliban Ranger; Because she didn’t know where they were taking her? Does she welcome death by herself? She resisted until the last moment when the Ranger was surrounded by passers-by watching the scene, but people did not try to save the girl. Two men wearing traffic police uniforms also beat her and three other Taliban fighters joined them.

The traffic police and Taliban fighters beat that girl in front of dozens of people with beating fists, kicks, and batons. They assaulted her and pushed her whole body to enter the Ranger. When she was still resisting, they beat her with kicks, punches, and batons so much that my heart was almost ripped out. I put my hand on my heart and took a deep breath and then I closed my eyes so that I don’t see anymore; But when I opened my eyes, she was thrown into the Ranger. One of the women in black sat next to her and kept punching her on the head and face, and on the other side of her sat another Taliban member. The other black-worn woman also went and sat next to the Ranger driver, and three soldiers stood with their hands on the trigger in the Ranger’s field and moved towards Dashte Barchi.

A moment later the same Ranger returned and went to Darulaman road, and it was not known where they were taking that girl, But that girl was still involved with that woman in black and the Taliban member. While they were hitting her on the head and face, they quickly passed by us and took her, but where? Behind bars, torture or to kill? who was that girl critic, protester, reporter, or criminal? No one understood who she was and why she was brutally assaulted and subjected to violence and why she was kidnapped in front of the eyes of the people, no one knew.

The cowardly men and passers-by who gathered around the Ranger to watch, none of them dared to ask who that girl was and why the Taliban assaulted and kidnapped her in public. No one supported that unidentified girl who we have a picture of a girl screaming for help and to be saved from the clutches of the Taliban, and they only watched the screams of a girl when she was kidnapped by the Taliban.

The streets of Kabul are full of arrests of women and girls who are secretly kidnapped and taken away. The abducted women did not return from the shambles, only women were saved from death whose arrest was widely reported worldwide.

Do you remember that Zabihullah Mujahid, one of the spokespersons of the Taliban group, said: “The Taliban did not arrest any women, they denied the arrest of protesting women, such as Tamana and her sisters, Parwana, Mursal, Zahra, and 29 others who were kidnapped from a safe house. And then the Taliban recorded forced confessions proudly and then published the news of their release.

Some of the passengers accused the Taliban group of brutality. They believed that what kind of crime could a woman has committed to be brutally assaulted by the Taliban.