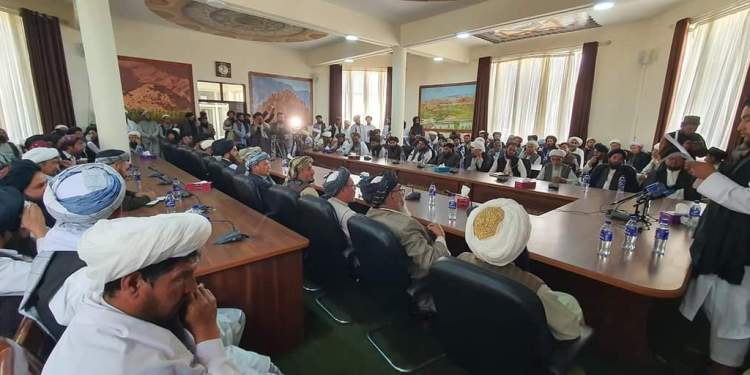 The Taliban governor’s office in Bamyan has published a statement saying that Khalid Hanafi, the minister of Propagation of Virtue and Prevention of Vice, traveled to Bamyan province yesterday (Wednesday, 27 July ) and met Shia scholars.

Khaled Hanafi, the Minister of Propagation of Virtue and Prevention of Vice of the Taliban group, said that “In the last 20 years, schools and universities have corrupted and perverted the minds of young people. The Taliban will remove the western culture from people’s lives and replace it with pure Islamic culture.”

Meanwhile, Shia Ulema Council in Bamyan has also published a statement about the agreements between Shia Ulama and the Taliban.

The Shia Ulema Council in Bamyan has said that the Minister of Propagation of Virtue and Prevention of Vice has reserved a special amount for holding the Ashura ceremony.

The Shia Ulema Council has also said that according to the proposal of Seyed Nasrullah Vaezi, the head of this council in Bamyan, and the approval of Khalid Hanafi, the Taliban group employs Shia Ulemas as morality police.

Bamyan province was one of the safest places in the country during the last two decades, and women in this province had relatively achieved basic rights and civil liberties. Now some users on social networks have addressed this issue and expressed concern that “Shia scholars are also taking action to ‘interfere in people’s privacy.” These local users are worried about the appointment of morality police in their city and said that it is not clear what will happen to women and girls after the agreement of cooperation between the Shia Ulema Council and the Taliban group to implement the orders of this group.

The Ministry of Propagation of Virtue and Prevention of Vice was established by the Taliban group on 17 Sep, about a month after the occupation of Kabul, instead of the Ministry of Women’s Affairs.

The majority of fatwas that are anti-human and violate the human rights of citizens, including anti-feminist decrees, such as the decrees prohibiting the education of girls, prohibiting women from working, restricting women’s access to health services, prohibiting women from sightseeing and traveling without a mahram, the mandatory hijab burqa, and the prohibition of political participation have been instructed by the Ministry of Propagation of Virtue and Prevention of Vice.

This Ministry of the acting cabinet of the Taliban group has so far appointed special fighters in all the provinces of Afghanistan to supervise the implementation of the mandatory hijab decree, prohibition of women’s education and work, and prohibition of sightseeing and travel of women without a mahram.

The morality police of the Taliban now have checkpoints on some public roads in Kabul city and some cases even check family photos on citizens’ mobile phones.

Taliban morality police in Ghor, Takhar, Herat, Balkh, and Badakhshan have repeatedly whipped women in public or on the road because of their clothing.

In the latest case, Taliban morality police in Takhar province whipped a middle-aged woman for leaving the house without a mahram. According to media reports, these fighters, who are tasked with interfering in people’s privacy, in Kabul, Uruzgan, Kandahar, and Herat have whipped and threatened men because of the way they dress and how they shave their beards many times.