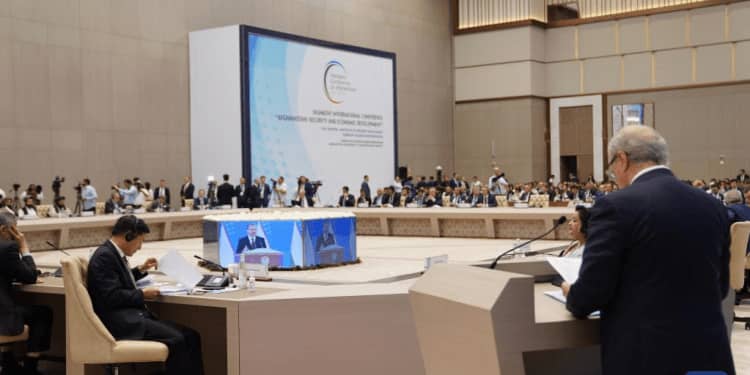 The Tashkent Conference on Afghanistan was held on (Tuesday and Wednesday,) in the capital of Uzbekistan. Representatives of 20 countries, including the United States, and International Organizations were present at this Conference. This program was held following the previous conferences that were held for Afghanistan but failed.

I called Shahnaz Kamelzade (reporter for Afghanistan International) to gain more information. She is in Tashkent and describes her narrative closely and in detail for the Nimrokh. I asked her to explain the conference, its goals, the speeches, the Taliban, the issue of women in Afghanistan, and the results of the conference.

Ms. Kamelzade says: “This conference, which was held with the aim of Afghanistan’s issues, economic growth, and stability, had about 35 speakers. The Taliban, who were on one side of the issue, presented all their work and programs during the past year, and the interesting point for me was Motaqi’s speeches who said in one part of his speech: “Women in Afghanistan work everywhere without restrictions; Only a few people whose work and activities are not following Taliban law work in their homes and earn their livelihood.” He also said: “10 million children are studying in Afghan schools.” but he did not make clear if the girls have a share among these 10 million or not?! In this conference, Taliban Foreign Minister Amir Khan Motaqi emphasized the release of frozen Afghan central bank reserves in the United States. Motaqi called the freezing of Afghan assets the main cause of poverty in Afghanistan. In one part of his speech, he said that we have implemented all the Doha agreements and now, the U.S. must keep its promise. I guess the Taliban will not make any changes in their policies, governance, and restrictions on women. Because they say: “We fulfilled all the promises we made. On the sidelines of this conference, in the corridors, and wherever I saw them; I was asking questions from Taliban representatives, I asked Anas Haqqani whether you allow Afghan women to work and study? Do you allow them to take part in society? Anas Haqqani didn’t answer and someone else came, interrupted him, and said: ” Everything will be fixed slowly, everything can’t be fixed at once, you have to give time and opportunity to get everything done slowly.” I told them that the Prophet’s wife (Khadijah) used to work, she worked with her husband; I said: “At least stay at the level of the Prophet and let women work and have their own activities.” He said again: “We will, we need time, it will happen little by little.” I asked them when will it happen? Women have fled from Afghanistan, and anyone who protests will be killed, when will you solve women’s issues? I didn’t know many of them and I didn’t know who I asked and who was standing in front of me, But I asked many of the Taliban members this question, and they kept silent and did not speak.

According to Shahnaz’s understanding of the behavior and words of the Taliban, the situation of Afghan women will not improve soon.

Shahnaz Kamelzade says: “I listened to all the speeches, everyone spoke in detail; In this conference, “Thomas Nicholson”, the Special Representative of the European Union for Afghanistan, expressed his concern about the establishment of a comprehensive government and the dire situation of human rights in Afghanistan and asked the Taliban to guarantee the independence and capacity of the country’s central bank. Continuing his speech, he said that to address Afghanistan’s economic challenges, the Taliban must demonstrate budget transparency, ensure legal clarity and the rule of law, and ensure the independence and technical capacity of the central bank with basic measures.

Meanwhile, “Thomas West”, the US Special Representative for Afghanistan; Regarding women’s rights and asked other countries to put pressure on the Taliban to recognize women’s rights. He spoke harshly against the Taliban. Many participants in the Tashkent Conference raised serious concerns about human rights violations, including restrictions against journalists and women. He also said that everyone is worried about the continuation of the economic and humanitarian crisis in Afghanistan. The Taliban must fulfill all the agreements they signed in Doha, Qatar.

Shahnaz continues: “Rina Amiri” was also at the conference where the Special Representative of the United States for the rights of women and girls in Afghanistan attended. “Thomas West” and “Rina Amiri” emphasized more on the issue of women and human rights. In this regard, Rina Amiri announced in a series of tweets that: “No one expressed their support for the recognition of the Taliban in Tashkent”, and “I disagreed with the claim that the regressive policies of the Taliban are based on Afghan culture and argued I realized that most Afghans wish for education, work and opportunities for a better future for their sons and daughters.”

Shahnaz Kamelzade says about the outcome of this conference: “In the final statement of the Tashkent International Conference for Afghanistan, which was issued by the host country, it is emphasized that currently “The main priority should be the revival and strengthening of the Afghan economy as an important factor in achieving lasting peace.”  Also, the US has told the Taliban that they are willing to start a negotiation for seven billion blocked money, but they did not say that they will lift the sanctions. They have set conditions for this conversation. One of them is the commitment of the Taliban to use the money for the development of the economy of Afghanistan, and the US has requested that no money be spent on the use of Afghan soil by terrorist groups. In this statement, the importance of establishing a government based on broad representation by the Taliban, guaranteeing women’s rights, and access to education for Afghan girls is emphasized and called “A basic condition for completing the process of national reconciliation in Afghanistan”.

Shahnaz feels sorry at the end of her speech and says: “All the countries that gathered here just wanted to show off what they have done for Afghanistan; In other words, countries came to show their strength and hit each other, for example, Russia used this opportunity and hit the US and other countries as well. That is, instead of thinking about Afghanistan, they thought about themselves and how to use this platform and field more in their favor. But what the countries emphasized about Afghanistan was inclusive governance and the removal of women’s restrictions on education.

Shahnaz says: “I feel sorry for Afghan women, Afghan women are scientists, all these women have the right to life and freedom, I admire the courage of Afghan women and wish them victory.”