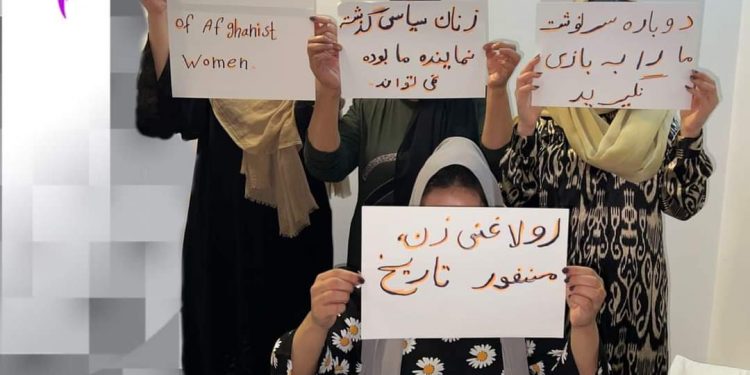 The members of the Spontaneous Movement of Afghanistan Women’s Fighters protested against Rula Ghani, the wife of Ashraf Ghani Ahmadzai, the former president of the country in Kabul.

The members of this protest movement say that political women of the past like Rula Ghani are not representative of Afghan women.

Today (Sunday, 31, July ) these women have protested against the selection of Rula Ghani as a special speaker for a conference in the United States by the “Women Forward International” organization.

These women by publishing a declaration and video messages saying: “They will protest against any movement and politician who acts against the will of the people of Afghanistan.”

On October 6, 2022, about two months later, Rula Ghani is scheduled to give a speech as a special guest at a party in Washington DC, United States of America, on “Empowerment of Afghan Women”.

Meanwhile, Rula Ghani is the main accused of widespread embezzlement and corruption in Afghanistan’s largest women’s empowerment project with a budget of 240 million dollars called “Promot”.

Therefore, the Spontaneous Movement of Afghanistan Women’s Fighters has said that “The female protesters do not consider Rula Ghani, who is accused of corrupting the “Women’s Empowerment” programs in Afghanistan, worthy of being invited to any program about women.”

This women’s protest movement considered the selection of Rula Ghani as a special speaker by the “Women Forward International” organization in the US as an “Attempt to re-legitimize” her and declared that such an act is unforgivable and “We accuse any organization that does such irresponsible acts of financial corruption in economic programs for Afghan women.”

In the protest program of this movement, female protesters held up placards that show slogans such as “Rula Ghani, the hated woman of history” and “Political women of the past cannot be our representatives.”