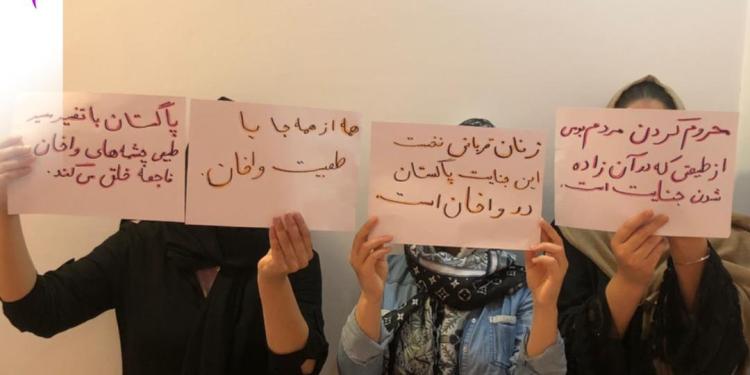 “Women Are the First Victims of Pakistan’s Crime in Wakhan”

Members of a women’s movement protested against the action of the Pakistani army to “Change the direction of the natural springs of Wakhan Badakhshan towards Pakistan”.

By issuing a resolution, these female protesters have called Pakistan’s military advance into Wakhan Valley and changing the directions of the natural springs of this valley in Badakhshan province in northeastern Afghanistan as a crime and a violation of Afghanistan’s territorial integrity.

The Spontaneous Movement of Afghanistan Women’s Fighters has said that the attack on the nature of this region, which is considered one of the most important natural ecosystems, cannot be tolerated and has caused forced environmental changes, as a result, the social form of people’s lives is negatively affected.

This women’s movement has asked independent environmental activists to pay attention to “The disaster that the Pakistani army will cause”.

Emphasizing the natural principle that “Changing the direction of the springs harms the environment and the natural springs of each region belong to itself”, these female protesters have warned that the lives of farmer women in Wakhan villages are affected first of all by preventing the Pakistani army from accessing water.

According to these female protesters “The poverty caused by the drought, in addition to the violence of the Pakistani army, will change all forms of life in Wakhan villages, and in such a situation, women will be the first victims.”

These female protesters have added in the resolution that in this situation and conditions “Activists in Afghanistan are oppressed by the Taliban, women’s rights activists and environmental activists from all over the world should protest against the crime of the Pakistani Army.”

According to these women, “Now that there is no fighting force and power to put pressure on the government of Pakistan, the only alternative is the global solidarity of people movements.”

This news caused a lot of public reactions and many citizens believe that the “Taliban group sold these parts of Afghanistan to Pakistan or because of the financial and military support they received from Pakistan in the past, they are not able to protest against this obvious invasion.

Now the Spontaneous Movement of Afghanistan Women’s Fighters states that “Depriving native people of the nature in which they were born is a crime. Pakistan is creating a disaster by changing the natural directions of Wakhan springs, and women are the first victims of Pakistan’s crime in Wakhan!