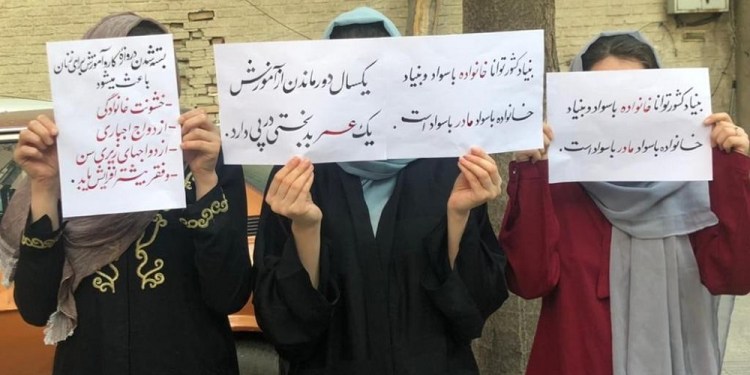 Women’s Protest for the Reopening of Girls’ Schools in Kabul

The members of the “Spontaneous Movement of Afghan Women’s Fighters”  held a protest meeting in Kabul for the reopening of girls’ schools.

Some of these women had a civil protest today (Wednesday, 3 August ) in a closed place.

The members of the Spontaneous Movement of Afghan Women’s Fighters, emphasizing the reopening of girls’ schools, addressed the Taliban: “Don’t break our pens, don’t burn our books, don’t close our schools!”

By issuing a resolution, female protesters have said that denying girls from education will increase domestic violence, forced and underage marriages, and the spread of poverty in society.

These women call on the solidarity of the people of Afghanistan and ask the international community to put pressure on the Taliban and force this group to change its policy regarding women’s right to education and work.

These women say that “The history of the world” is “Ashamed” of closing schools for Afghan girls.

This is while it has been almost a year since the Taliban came to power and female students above sixth grade have been excluded from school. Meanwhile, female protesters say: “A year away from education leads to a lifetime of misery.”