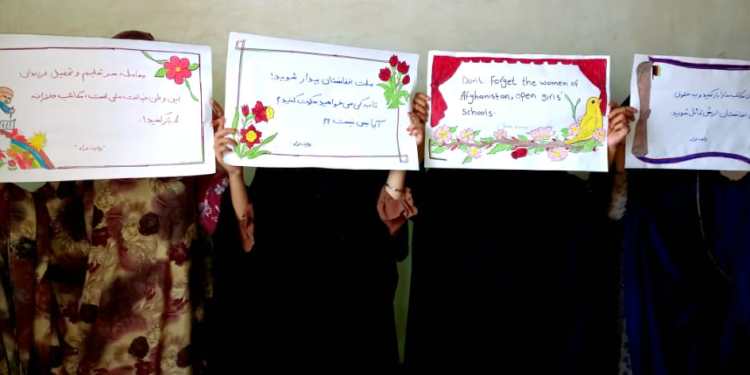 Members of the Spontaneous Movement of Fighting Women of Afghanistan supported women’s right to education and protested against the policies of the Taliban group in Farah province.

Some female protesters in Farah condemned the closure of girls’ schools and protested against the Taliban yesterday ( Tuesday, 9, August ) and accused the international community to silence on the fate of Afghan girls.

By holding a protest gathering in an unknown and closed place and showing placards, these women accused the international community of silence and asked the people of Afghanistan, even though they have no right to protest against the Taliban, also not to remain silent in front of them.

“Dealing with children’s right to education is treason, open girls’ schools” and “Silence against the Taliban is enough.” Are some slogans written on the placards.

They demand the world not to forget Afghanistan.

After the suppression and imprisonment of street protesting women by the Taliban, women’s protest gatherings are now expanding in closed places in the country’s provinces.

On the occasion of the first_year anniversary of the fall of Afghanistan to the Taliban, the female protesters named unfortunate consequences such as: taking away the right to work and women’s freedom, the closure of girls’ schools and economic crises, turning Afghanistan into a place of terrorist activities, and they ask the world to evaluate the one-year failure of the Taliban in Afghanistan and not to recognize this group.